Nikki Fox and Julian Sturdy of the BBC report:

The family of a drowned patient have claimed he might still be alive if the fake psychiatrist responsible for his care had done her job properly.

Darren King, 31, of Suffolk, died after suffering a seizure in his bath in 2017.

Mr King was living independently under the care of Zholia Alemi, whose bogus qualifications have since been exposed.

Should we be surprised that the worst mental health trust in the country didn’t notice that one of its consultant psychiatrists was a first year medical school dropout? As a locum, she was probably paid about £120 per hour.

We have repeatedly said that patients and carers are misled when locum doctors are described as ‘consultant psychiatrists’ when often they are not members of the Royal College of Psychiatrists, have not taken or passed the professional psychiatry exams, have not completed the specialist training in psychiatry or are not on the specialist register of the General Medical Council.

However, not having a medical degree at all if plumbing new depths, even for NSFT.

The BBC can now reveal how Alemi, who was assigned Mr King’s case while working for the Norfolk and Suffolk NHS Foundation Trust (NSFT), had refused a family request to do a capacity assessment on the risks of him living independently.

Mr King, of Lowestoft, was autistic and his parents said they were worried about his use of a bath because he did not always take his drugs to prevent seizures.

Darren King died at the age of 31.

The BBC has found that Alemi worked for more than a year for the NSFT as a locum consultant psychiatrist between 2014 and 2015.

She worked mainly for the adult learning disability service in Oulton Broad, as well as disabled children. After Alemi’s departure from the trust, Mr King was not assigned to another psychiatrist.

An NSFT spokesman said: “All the appropriate checks had been undertaken by the GMC and by the agency through which we employed Zholia Alemi before she joined NSFT.

“Our trust terminated her contract as a result of safeguarding concerns and reported her to the GMC.”

NSFT’s Medical Director Dr Bohdan Solomka is writing to all patients and carers that Alemi had contact with.

Incredibly, Nikki Fox said in her television report that NSFT re-employed the fake doctor even after it had terminated her contract. NSFT only realised its mistake three days later. 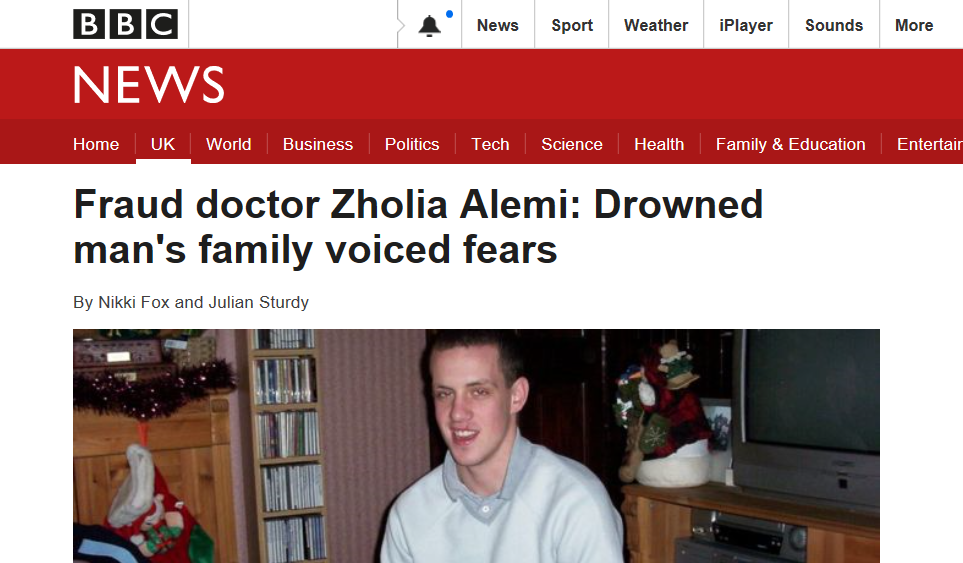 This evening's @BBCLookEast looks like a must see for those concerned about mental health beds crisis and @NSFTtweets. twitter.com/nikkijfox/stat…

Scrap the tens of thousands of pounds wasted on @NSFTtweets interim Director of Communications @IsabelCockayne and give the money to families so they can visit their loved ones. And open local beds. Patients and carers should be the priority. Not disingenuous spin doctors. twitter.com/TownCloseEmma/…

@asifamhp @TownCloseEmma You can bet that future Baroness @MarieGNHS, former Professor @warren_nsft and champagne charlie @masonfitzgerald will have been claiming thousands of pounds between them on expenses for travelling from their homes in London and Sussex to @NSFTtweets.

@TownCloseEmma @asifamhp We raised this issue at the beginning of the campaign when a man from West Norfolk was promised help with the cost of visiting his wife in Norwich. Then @NSFTtweets went back on its word. This has been going on for more than six years and gets worse and worse.