A mental health patient died after a “failure” to respond in a “timely way” by a stretched health trust team, a report says.

The Norfolk and Suffolk Foundation Trust report said there were “serious capacity issues” with its crisis resolution team.

It says another death occurred after a patient could not be assessed due to the service having “reached capacity”.

The report into unexpected deaths, including suicides, was released following a Freedom of Information request by the Campaign to Save Mental Health Services in Norfolk and Suffolk (CSMHS)

It reveals the trust conducted a review following the death of the patient to ensure better communication and to put in place an “escalation plan” when crisis team “capacity is exceeded”.

It said the patient’s death came at a time when there were “serious capacity issues” that led to a “failure to respond in a timely way”.

Another patient died in the process of being transferred to the crisis resolution team when it “had reached capacity” and “could not assess the service user (patient) overnight and late into the next day”.

The patients died in the past year.

Director of nursing Jane Sayer said: “This was the result of increased referrals to our services, particularly… in central Norfolk, where the pressures on our staff were further exacerbated by a lack of an increase in funding for mental health services nationally.”

“Since last year, our trust has made a £950,000 investment to increase the capacity of our community mental health teams, while redesigning our Crisis Resolution Home Treatment team to ensure it can provide patients with adequate support and assessment.

“This has resulted in making sure our patients based in the community have a named mental health professional or at the very least a duty worker, co-ordinating their care to offer greater support.

Why can’t Jane Sayer and Norfolk and Suffolk NHS Foundation Trust (NSFT) tell the truth? It isn’t the result of increased referrals, it is the result of the chaos and cuts of the radical redesign. On the one hand, Jane Sayer and NSFT claim there isn’t enough money; on the other hand they pretend everything is okay and brag about ‘investment’ after services have been closed or degraded. How do you explain what happened to this poor woman, Jane?

The £950,000 ‘investment’ comes after far deeper cuts to mental health services. Things are not okay. There is a crisis. And a further £36 million of cuts are planned.

There are about 1,000 ‘unallocated’ patients on ‘waiting lists’. What about them?

People in crisis are not being assessed because there aren’t enough beds or staff. What about them?

What about people who were kept safe by the Assertive Outreach team before it was closed? What about them?

A Campaign spokesman said: “Over the past four years, despite rising demand, the funding of mental health services… in Norfolk and Suffolk has been cut by 18% relative to physical health. Beds and community services have closed.

“In these circumstances, it was inevitable that demand would exceed supply and people in crisis needing help from the NHS would be let down, with tragic consequences.” 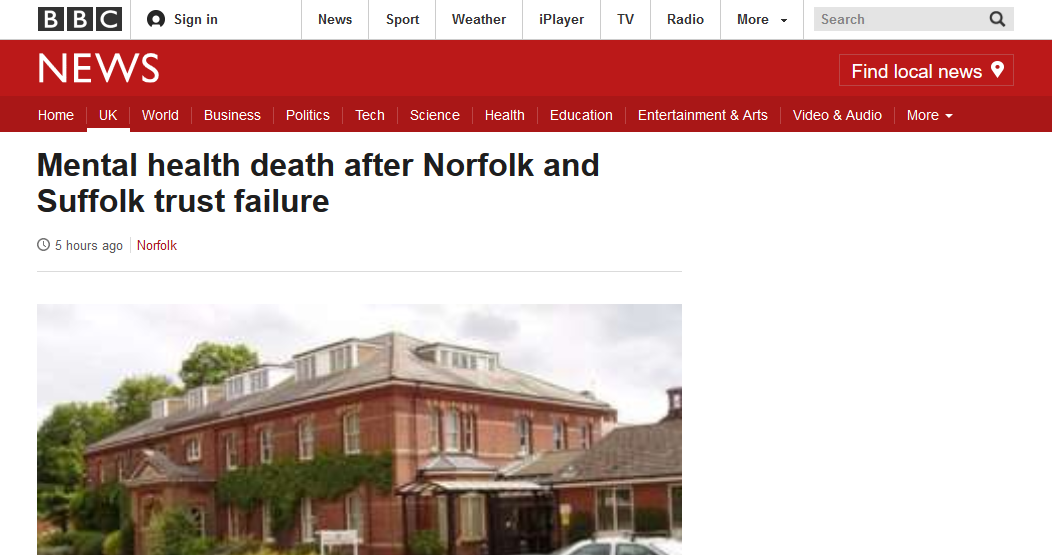