Mental health services are being “starved of resources”, the chairman of a health watchdog in Norfolk has said.

He said he had seen a “fragmented and uncoordinated” approach to mental health during his time as a coroner.

Mr Armstrong, who was Norfolk coroner for 18 years, said he saw many inquests involving people with mental health conditions.

In September 2013, he presided over an inquest into mental health patient Matthew Dunham, 25, who died at Castle Mall shopping centre in Norwich.

The inquest was told Mr Dunham faced a month-long wait to see a specialist after describing suicidal thoughts.

Mr Armstrong told BBC Look East: “Mental health services are being starved of resources given to other parts of the health system. We need to treat mental health on a parity with physical health.

“We need to spend more money on mental health, that is unarguable. The government is beginning to recognise that.”

He said the lack of cash meant more people with mental health conditions would not be diagnosed, leading to “more misery for them and their families”.

Mr Armstrong said the number of people killing themselves when suffering from mental health conditions could be reduced with the “right specialised treatment by the right people”.

A spokesman for the Campaign to Save Mental Health Services in Norfolk and Suffolk said: “Mental health services have to be funded at a level which delivers a decent service to the most vulnerable and needy, young or old. This is not the case at the moment.”

Norfolk and Suffolk NHS Foundation Trust, which treats mental health patients, said it was “deeply saddened” by Mr Dunham’s death but would not comment further.

Perhaps NSFT’s silence is because it is getting sued by families of those it has let down? Or because NSFT only chooses to talk about ‘good news’?

Where is duplicitous ‘mental health champion’ Norman Lamb, the local MP and Minister of State at the Department of Health directly responsible for mental health? Nowhere to be seen. That’s something at least.

Read the article in full on the BBC website by clicking on the image below: 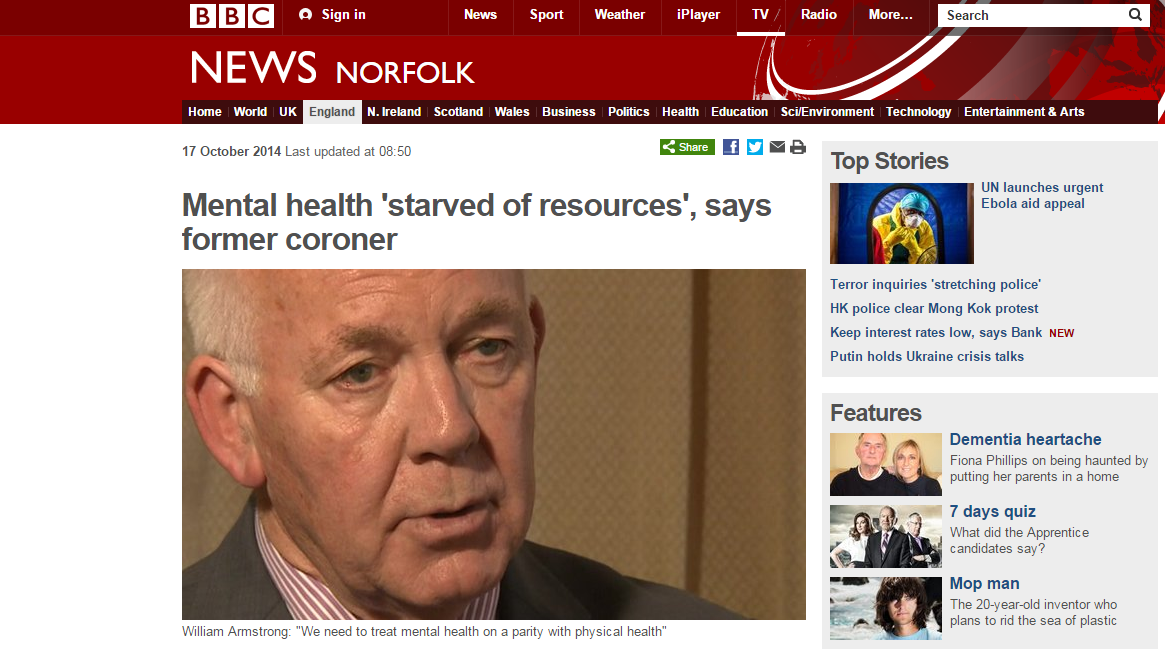 1,134 out of trust bed days in October means that @NSFTtweets is short of at least 40 beds. New vanity building project in 2024 is not going to solve the beds crisis. Even at £2.4m per extra bed.

Finally, we have forced @NSFTtweets to stop hiding its true Out of Area/Trust situation. Even saying that, @NSFTtweets publishes the data in separate graphs to obscure. We have collated the data in this graph. The SEVERE 2020 BEDS CRISIS at @NSFTCrisis is obvious. #MuppetShow pic.twitter.com/Vy8lC0SJr9

“The bad news – this one error may have indirectly killed about 1,500 people, and implicitly government delays and failures in contact tracing may be responsible for many more deaths.” Typhoid @didoharding has to be sacked. theguardian.com/world/2020/no…