Andy McNicoll is an excellent investigative journalist. McNicoll’s latest article at Community Care demonstrates Norman Lamb’s duplicity and hollow words, outlining the cuts to crisis prevention as funding has been slashed for Assertive Outreach (AO), Early Intervention (EI) and Crisis teams. Norman Lamb’s claim to be a champion of the mentally ill is a very sick joke.

Of course, at Norman Lamb’s home trust, Norfolk & Suffolk NHS Foundation Trust (NSFT), Assertive Outreach has not been cut but abolished without any replacement, with devastating results. Similarly, Early Intervention teams have ceased to exist in Suffolk. And McNicoll’s figures, from the report of Dame Sally Davies, the Chief Medical Officer, only cover the period until the end of the 11/12 financial year. The cuts have deepened since: the vicious radical redesign ‘improvements’ and ‘enhancements’ of Kathy Chapman, now astonishingly and worryingly working for Geraldine Strathdee, Clinical Director for Mental Health at NHS England, were only just beginning and Norfolk still had Assertive Outreach.

The table below is deeply shocking. Click on it to read Andy McNicoll’s full article. 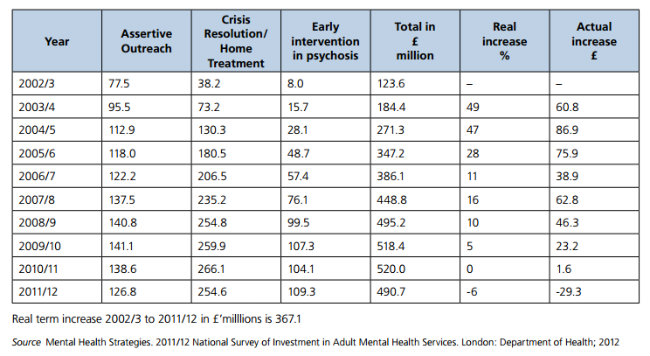 3 thoughts on “Community Care: How mental health teams that are key to crisis prevention have been cut back”