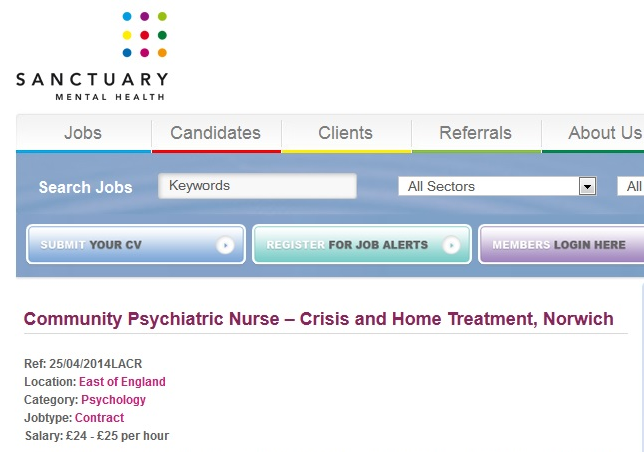 We have written extensively about Norfolk & Suffolk NHS Foundation Trust’s (NSFT) botched redundancy programme which has wasted many millions of pounds and introduced unnecessary and unacceptable risks into the delivery of vital services.

Now, exactly what we warned would happen is happening. This is the job advertisement for a band six Community Psychiatric Nurse to join the Crisis Resolution & Home Treatment (CRHT) team in Norfolk. The post is paying £25 per hour, which works out at about £45,500 per annum. We’ll put in a Freedom of Information request to see how much the agency is charging NSFT on top of this but it will be a substantial premium. The top of the band six pay scale is £34,530. The band five pay scale is £21,478 to £27,901.

Meanwhile, staff who did, or could have done, this job have been paid to leave and others have been debanded from band six to band five and/or forced to move elsewhere in NSFT. So, existing staff are forced to watch temporary staff, often less qualified, experienced and productive, come in and do their old jobs for more money than they were paid when they were band six staff and a lot more than band five staff are paid. Demonstrating utter financial incompetence, NSFT is paying protected pay to many of these former band six staff, so NSFT is paying them at the rate to do the jobs for which it is now recruiting but can’t ask the demoted staff to perform because it humiliatingly demoted them in sham 20-minute interviews to ‘save money’. We said it wouldn’t take long for NSFT to waste the clinical commissioning groups’ £500,000. Don’t forget the crisis team staff are already having to deal with the consequences of the bed crisis.

This isn’t just happening in the crisis team: Sanctuary is also advertising band 5 and band 6 agency vacancies: in the community teams and on the wards in central Norfolk; in the community and crisis teams in the West Norfolk and on the wards in King’s Lynn; in IDT, Home Treatment and Access & Assessment (AAT) in Suffolk. That’s pretty much everywhere in NSFT. Imagine the impact on continuity of care as well as staff morale and trust finances.

Staff have had enough and are calling in the unions and the lawyers. They believe that the debanding and redundancies need to happen at the top of NSFT rather than on the frontline. Has the NSFT Board no shame?

12 thoughts on “Crisis Team Newsflash: CRHT calls in the unions as NSFT tries to recruit agency staff on £25 per hour”