Yesterday, a few of the truths told by this campaign emerged at the NSFT Board meeting in Norwich, as reported in the EDP:

“Mental health chiefs have insisted they have a plan to tackle high caseloads after it emerged that almost 400 patients in Norfolk were waiting to be assigned to a community worker… This potentially presents a clinical risk.”

The internal NSFT statistics are that community teams are running 41% above capacity and need to increase in size by 28% to be fully staffed. Yesterday, a huge new cabinet was delivered to Gateway House to accommodate just some of the unallocated cases. Gateway House, on a business park outside Wymondham, has no clinical space but has plenty of room for paperwork.

“Directors were told that the mental health trust had secured an extra £500,000 from Clinical Commissioning Groups in Norfolk to help hire new staff to meet demand. It comes after NSFT officials announced last week that 269 of 412 vacancies would be filled in the next three months.”

A few agency temporary workers have appeared in the community teams with little to no induction or introduction, no knowledge of local service users and little understanding of how NSFT works. It won’t take long for NSFT to waste the clinical commissioning groups’ extra £500,000 of taxpayers’ cash on extra agency staff and management junkets.

The other element of the Operations Director’s cunning plan is to discharge 22 patients for every 15 who are taken on. This was challenged by a member of our campaign, who pointed out that people with lifelong illnesses are not like sausages to be dispensed with.

NSFT won’t even pay for enough parking permits for its staff to work productively in the Norwich community, despite having removed access to the former city of Norwich base, 80 St Stephen’s. Instead, staff are forced to either leave whatever they are doing to move their cars to avoid parking tickets or pay for much more expensive car parking which has to be reclaimed through the bureaucratic expenses system. The permits cost £46 per year. In contrast, the management ‘leadership event’ at Newmarket Racecourse cost £77 for each of the 110 predominantly non-clinical delegates for the day. The self-selected ‘leaders’ made jigsaw puzzles, drank free tea and coffee and ate nice lunches. Nothing encapsulates NSFT’s priorities better.

The NHS Staff Survey exposed desperately low staff morale at NSFT. Many members of staff have impossible jobs and had their salaries reduced; all have watched NSFT waste millions of pounds making competent and necessary colleagues redundant. Now, in response to the crisis NSFT created and denied for so long, about which NSFT has been repeatedly warned, NSFT employs agency temporary staff on wages around twice that of their own staff and most likely new staff will be on pay bands and ‘recruitment and retention enhancements’ denied to its own existing, loyal, stressed and overburdened staff.

Are there 269 new staff waiting to start or is this another empty promise from NSFT?  We’ll see in three months but, given the infamous performance of the directors of Operations and Workforce and Organisational Development, we wouldn’t recommend anybody to hold their breath. There is a world of difference between placing some advertisements in the press, organising a few recruitment days at Carrow Road and receiving some applications and having suitable, qualified, motivated professionals in situ delivering services. As the NSFT Chair, Mr. Page, said in his report yesterday:

To whom could Mr. Page have been referring? Perhaps the NSFT Board could simply adopt the novel approach of sacking people who repeatedly waste millions of pounds, manipulate statistics, write misleading reports and fail to deliver vital services rather than adopt this ‘role model the behaviours’ drivel’?

Four months ago, NSFT and the central Norfolk CCGs promised that nobody in crisis would be placed in an out-of-area bed after the end of April but people are still being sent to the other end of the country with less than a week to go. Where is the money coming from to fund last year’s £2.4 million overspend on beds? And where are people in crisis going to go? Is this just yet another promise NSFT will fail to keep? Who is going to take responsibility for this failure to ‘deliver what is expected’?

However, at last one brave non-executive director has seen the light and is asking important, searching questions. Hurray for Stuart Smith:

“I am pleased to see improvement, but 2015 feels like a long way away and that has made me nervous.”

And, no Graham Creelman, deputy Chair of NSFT, these figures are not “painting a picture that is worse than it is.” That’s the same type of bunker mentality and denying your own performance statistics that got you into this crisis in the first place. If anything these figures are flattering, unbelievable as that may sound. It is interesting that of the eight visits made by non-executive directors to clinical areas at NSFT in February and March, seven of the eight were in Suffolk and not one non-executive director visited the adult teams in Norfolk which are under such tremendous strain.

From the Patient Safety and Quality Exception Report to the Board on the community team crisis written by Jane Sayer, Director of Nursing, Quality and Patient Safety, the reader would have no idea about the hugely expensive voluntary redundancy programme and of the NSFT Board’s culpability:

“Caseloads in Norfolk community teams have been higher than expected, and combined with vacancies and sickness, have resulted in a number of services users being allocated to a team, but without a named worker.”

Kathy Chapman blames higher than anticipated demand but she and the NSFT Board were warned repeatedly that the radical redesign and the voluntary redundancy plans were completely unrealistic, unworkable and unsafe. Even the unions were warning that there was no genuine redundancy situation as NSFT was hell-bent on wasting millions and paying experienced staff to leave.

Stuart Smith is right: 2015 is far too far away for a resolution to this crisis.

Click on the image below to read Adam Gretton’s story in the EDP. 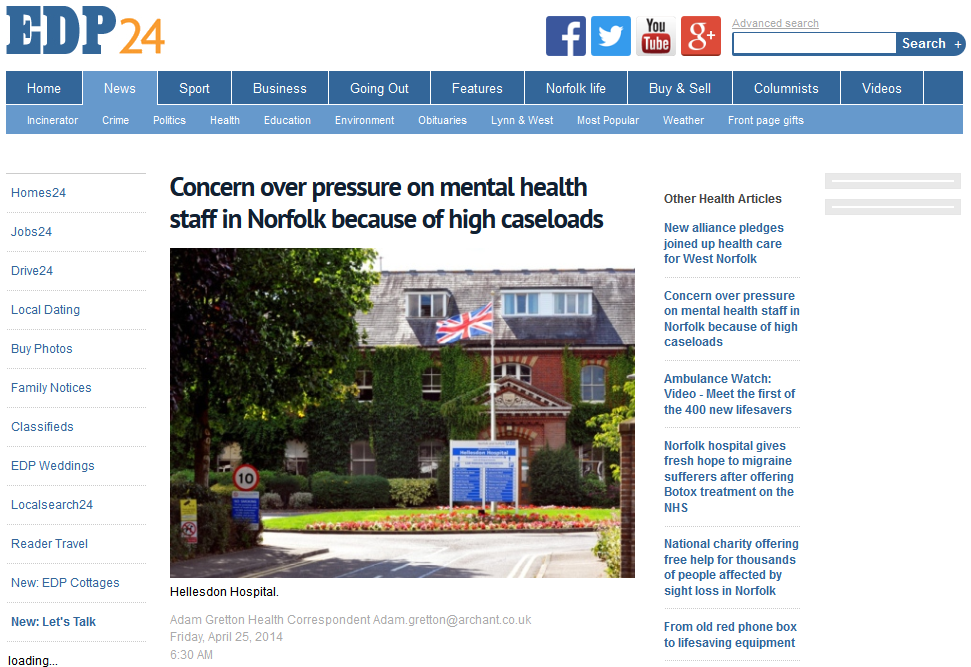 2 thoughts on “EDP: Concern over pressure on mental health staff in Norfolk because of high caseloads”