The Care Quality Commission (CQC) found staff at Beach Ward, in Hammerton Court, Julian Hospital, Bowthorpe Road, Norwich, had carried out incomplete record-keeping, incomplete risk-assessments, and that there was a “poor compliance with mental capacity assessments.”

Beach Ward, run by Norfolk and Suffolk NHS Foundation Trust (NSFT), opened in May this year and offers care to dementia patients with acute needs, and assessment and treatment planning.

Remember, wards have closed in King’s Lynn and Lowestoft as part of the radical redesign. Some of the most ill and vulnerable old people, if they are lucky enough to get an NHS bed, are now sent for an ‘enhanced service’ to the ‘centre of excellence’ at the Julian Hospital in Norwich.

The open letter from the nurses at the Julian hospital which we printed in February 2014 warned:

We haven’t heard that before, have we? 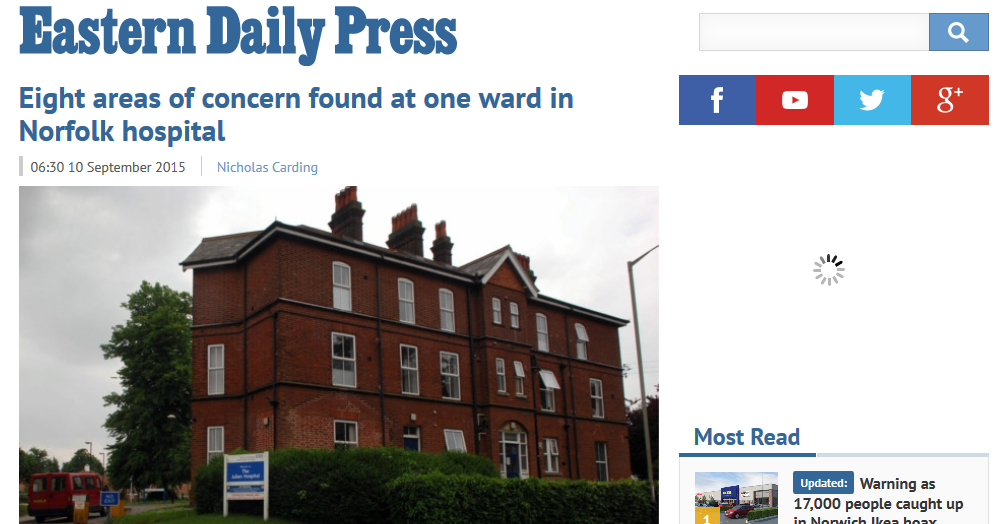 One thought on “EDP: Eight areas of concern found at one ward in Norfolk hospital”

How many appalling @CareQualityComm reports before @cygnethealth is stopped? “Some staff subjected patients to emotional and physical abuse. We reviewed 21 episodes of closed-circuit television footage and witnessed staff drag, slap and kick a patient.." theguardian.com/society/2020/…