Campaign member Emma Corlett of Unison, who is also a Norfolk County Councillor and member champion for mental health, said they had received “unanimous support” from people during the two day walk. She added that they wanted to raise the profile of mental health cuts in Norfolk and Suffolk.

“We met people who talked about their own mental health and there was no one that did not have something to say about mental health.

“If someone who had a stroke had to be taken to the nearest hospital bed in Darlington, Somerset, Bradford, Manchester, Harrogate or Glasgow, MPs would be falling over themselves to call for urgent action. This is the reality for people in Suffolk and Norfolk experiencing a psychiatric emergency. The cuts and imposed reorganisation of services have left people facing unacceptable delays for assessment and even lengthier delays awaiting allocation to a team for treatment. There are simply too many people to see and not enough staff to see them.”

Clive Lewis, Labour prospective parliamentary candidate for Norwich South, who walked the whole of the route, added: “This was a fantastic team effort that had campaigners from Norfolk and Suffolk and across the political divide pulling together to achieve something special.”

“What I also found touching was the support from so many members of the public along the way. So many had a story to tell us relating to mental health. Some spoke of how the service had helped them or members of their family. Others how it had deteriorated as of late. But all spoke of their admiration for its staff.” 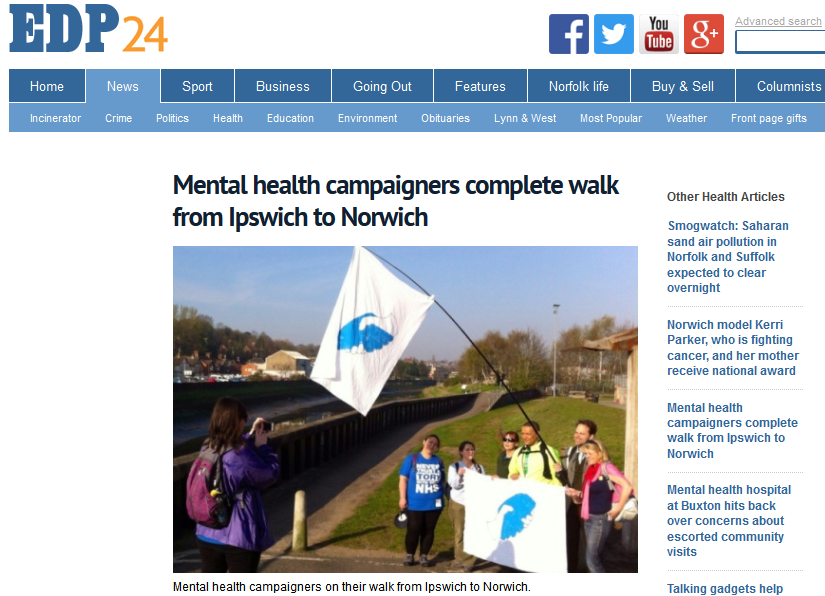 Front line staff react to @NSFTtweets £1m scandal "New Service Manager in Norwich, Leanne Payne, has no experience of mental health and is not a mental health professional. She appears to know nothing about mental health and does not want to listen. How is this clinically-led?"

Front line @NSFTtweets staff react to £1m payoff scandal "How many are back working in other roles after trousering their NHS cash? One senior manager who left now has a senior role at @changegrowlive. A partner agency. Literally weeks later. Not illegal but unacceptable."

Whatever any claimed increase in 'clinical staff' at @NSFTtweets consisted of, it did not consist of permanently-employed doctors and nurses. Meanwhile, spending on contract bureaucrats in 'Admin and Estates' more than doubled from £1.88 million to a staggering £4.29 million.

The unpublished @NSFTtweets Annual Report and Accounts 19-20 shows 21 fewer permanent doctors and seven more permanent nurses, so the number of doctors and nurses in the first year of former Professor @warren_nsft and future Baroness @MarieGNHS FELL by 14 as £1m wasted.

'He added that there were 193 more (full-time equivalent) staff employed by the trust this year than in July 2019, with 185 in clinical roles such as nurses and doctors, with medical vacancies reducing from 31% to 22% in a year.' See next tweet for truth.