After the publication of a highly critical report from the Care Quality Commission (CQC), the Director of Nursing, Quality & Patient Safety of Norfolk & Suffolk NHS Foundation Trust (NSFT) is now claiming that NSFT has ‘taken urgent steps’ to put the problems right. The Director of Nursing claims that ‘We have already taken steps to recruit more mental health nurses, work extra weekend shifts and monitor more closely the waiting times and experience of our service users.’ Why then is NSFT spending £7.3 million on redundancies which will see overstretched community teams lose more than one quarter of their staff? Why is NSFT losing experienced permanent staff yet spending £1.5 million per month on temporary staff? Why is NSFT rumoured to be looking to launch recruitment drives in Portugal and Ireland at the same time as paying some existing staff more than £100,000 in redundancy payments to leave? Where are the beds and staff to deliver a decent and safe service?

The Director of Nursing repeats NSFT’s latest line to the EDP and claims “The CQC’s report, on the whole, paints a positive picture of services at Hellesdon Hospital but it does raise two important issues on which we have already taken action. This CQC report helps us make further, important improvements.” The disingenuous claim of ‘further improvements’ implies that the failed and chaotic ‘radical redesign’ has been a success. Below is what the CQC did write about the ‘positive picture’:

Read the excerpts from the CQC report yourself and see whether you too identify two issues as NSFT claims or rather more. Then again, what should we expect from the Trust which launched a consultation into wards it had already closed?

As Emma Corlett of Unison and this campaign rightly says:

“The conclusions of this report are sadly entirely expected. They raise the exact same concerns that Unison members working on the front-line have themselves been raising for months. This is exactly why two weeks ago Unison raised a formal grievance with the chief executive and called for an immediate halt to the cuts and reorganisation of services so that a full assessment of the true impact of changes made so far can be made.”

“The report cites some excellent examples of a caring and compassionate group of staff, doing their best to maintain a good service in the midst of cuts and reorganisation that has left them without sufficient resources to do their job.”

Click on the image below to read the full article in the EDP: 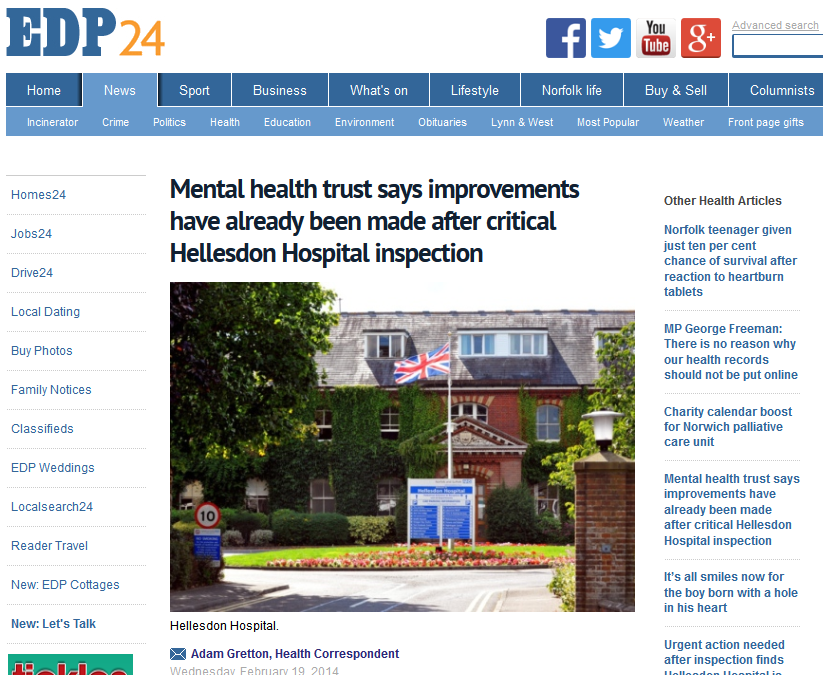 And @drdandalton is not telling the truth as many of these errors are clearly those of @NSFTtweets not third parties. Somebody should report him to the @gmcuk. Directors of @NSFTtweets have no duty to be honest but doctors do. twitter.com/Hereforthecrai…

@Hereforthecrai1 @CarolineAldrid5 And @drdandalton is not telling the truth as many of these errors are clearly those of @NSFTtweets not third parties. Somebody should report him to the @gmcuk. Directors of @NSFTtweets have no duty to be honest but doctors do.

“The tripling in the number of times that the receiving hospital is named incorrectly... is a damning reflection of the lack of available local beds and the forced transportation of people in mental health crisis to other parts of the country.” edp24.co.uk/news/health/un…

@CaffJackson @JohnBWaldron @NSFTtweets @NSFTjobs @HMRCgovuk Unbelievably, the radical redesign called for loss of one-third of @NSFTtweets consultants. When the initial stages were disasterous, that was abandoned. But look how many staff grades went. Many 'consultants' now Article 14 or locums. Never passed exams or completed training.

@thebluepencil @NSFTtweets @Norwichowl Amy Eagle @Norwichowl blocked us long ago. Nothing she could say would make up for the funerals and destroyed careers. She should never have been re-employed. Was she interviewed in Ipswich so people didn't know her track record? Her best friend is @NSFTtweets Head of HR... pic.twitter.com/kkohucJXu4