At last, after a year of campaigning, Norfolk & Suffolk NHS Foundation Trust (NSFT) has finally acknowledged that the ‘so-called bed crisis’ is a real bed crisis and that beds can be opened as well as closed.  Thank you, Michael Scott, Chief Executive of NSFT for starting to listen to us!

“[Michael Scott] told members of Norfolk Health Overview and Scrutiny Committee that there was still “considerable” pressure on inpatient beds. He added that the trust was talking with commissioners over plans to open ten new assessment beds at Hellesdon Hospital.

“We are still under pressure and we are talking to colleagues about opening new beds in Norwich. It will be a small number, but it will help ease pressure. If we were to open beds in Norwich that would help considerably because there are people from Norwich in Great Yarmouth and Waveney,”

However, with the decision already made to close beds at Carlton Court, the reopening of ten beds in Norwich will at best only maintain the current inadequate situation rather than provide much-needed additional capacity.  Lowestoft, Suffolk’s second largest urban conurbation, will be left without inpatient facilities, a place of safety, a local crisis team and skilled jobs. Carlton Court, a state of the art facility built using taxpayer’s money, will be wasted.

If, as indicated in the HealthEast consultation, the movement to a single site with limited additional capacity at Northgate requires building and other preparatory work, the beds crisis is going to get even worse unless the closure of Carlton Court is delayed until construction is complete, although both the campaign and the public believe it should not happen at all.  In addition, NSFT will need to find the £1.3 million required for construction from its parlous budget and it appears that commissioners have yet to approve additional funding required for reopening ten beds in Norwich.

NSFT pledged during the radical redesign that beds would not be closed until it was shown that they were no longer needed. The beds at Carlton Court are needed but they are still being closed in spite of need and massive public opposition both locally and throughout Norfolk and Suffolk. The proposed ten beds in Norwich must be funded and reopened and the closure of Carlton Court abandoned.

Norman Lamb, the minister responsible for mental health, claims to be helpless. The seven bureaucratic and unaccountable Clinical Commissioning Group (CCG) Boards, introduced across Norfolk & Suffolk by Norman Lamb’s government in its ‘no more top-down reorganisations of the NHS’, contain many executives on quite astonishing salaries who are ripping apart an integrated mental health care system and introducing inferior care and a postcode lottery. The beds at Carlton Court are needed for people in both Waveney and throughout Norfolk and Suffolk.  Great Yarmouth & Waveney CCG has decided it doesn’t need Carlton Court for its ‘patch’ and the other Norfolk and Suffolk CCGs are unwilling to pay for it.  Norman Lamb created the system but refuses to intervene. What does Waveney MP Peter Aldous have to say?  The result is a disaster for some of the most vulnerable people in Norfolk and Suffolk. 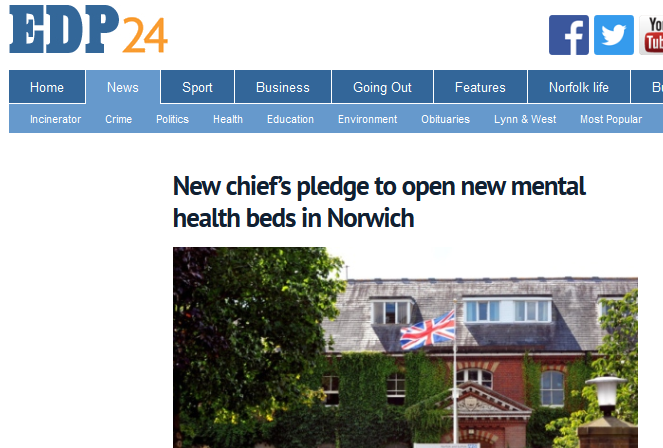 Also due to @NSFTtweets' closure of vital services such as assertive outreach (AO), failing to recruit clinicians but employing and promoting endless failed overpaid nonjob bureaucrats, failure to invest in community teams. How will 16 beds in 2024 at £2.5m each solve this?

This is what happens when you close more than one hundred beds, run wards at 100% capacity, rely on agency and locum staff and extortionate private beds and disregard maths and staff. As @WarrenBuffett said “Only when the tide goes out do you discover who's been swimming naked.”

Despite @NSFTtweets' claims, clinicians are telling us about shocking numbers of patients being transported to out of trust beds, with many others who should be in hospital without any bed at all Have you or a loved one experienced this? Would you be interviewed? Get in touch.