UPDATE: We’ll be protesting about the terrible state of mental health services in Norfolk from 5 p.m. outside the venue before going in at 6 p.m. Join us!

Healthwatch Norfolk is supposed to be the ‘consumer champion for health and social care’. Sadly, despite funding of £600,000 per year from Norfolk County Council, Healthwatch Norfolk has repeatedly failed to represent the views of patients, carers and the public. From its plush taxpayer-funded offices, it has largely ignored the rising number of deaths and suicides, the bed closures, waiting lists and cuts at Norfolk and Suffolk NHS Foundation Trust (NSFT). Instead, Healthwatch Norfolk comments on important matters such as the choice of font in the NSFT Quality Report. It essentially acts as an expensive undercover PR agency for the health bureaucrats who have enriched themselves while cutting mental health services.

Worse still, the Chief Executive of Healthwatch Norfolk, Alex Stewart, has been up to his neck in the secretive new cuts process, euphemistically called the ‘Sustainability and Transformation Plan’. Here is Alex Stewart on the STP Board as featured in the EDP: 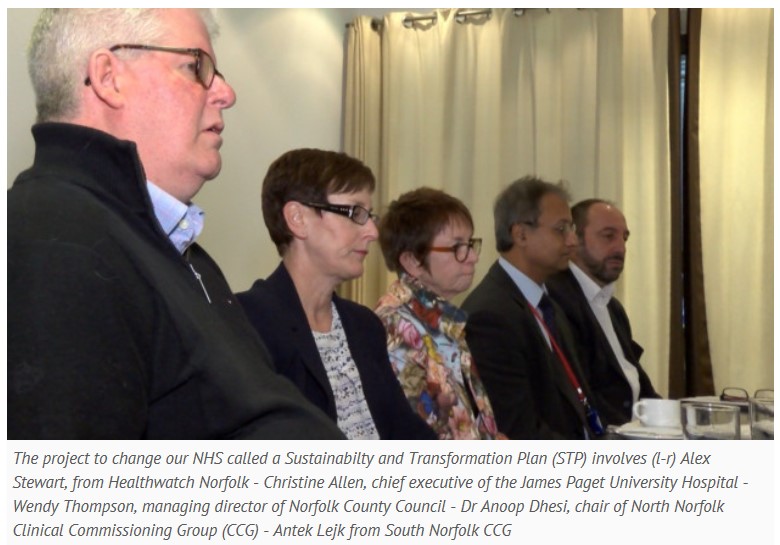 But the STP’s own figures show that forty per cent of the massive £180m of cuts are required because of ‘inflation’ – i.e. they are caused by health funding failing to keep pace even with the cost of living.

The secretive STP Board, including Alex Stewart, the Chief Executive of the ‘consumer champion for health and social care’ Healthwatch Norfolk, refused to share the STP even with Members of Parliament or local councillors. The media have also told us that their attempts to inform and involve the public were repeatedly rebuffed.

In mental health, the STP ‘workstream’ ‘led’ by the Chief Executive of Norfolk and Suffolk NHS Foundation Trust (NSFT), Michael ‘Payrise’ Scott, has promised to reduce suicide by ten per cent whilst cutting referrals by twenty per cent and caseloads by ten per cent. All while demand is increasing.

The ten per cent cut in suicides looks complacent and unambitious, given the massive increases in suicide across Norfolk since the radical redesign cuts.

Now, after the massive cuts have been decided, Healthwatch Norfolk has belatedly decided to pretend to offer the public their say on the STP with a Question TIme on 17th July 2017.

You can book tickets and submit questions by clicking on the image below. In Orwellian fashion, questions have to be ‘vetted’ a week in advance.

Is it worth participating in a fig-leaf consultation led by people who have been up to their necks in a secretive cuts process?

On balance, yes. Because we have to expose the process for the sham that it is.

Bring your megaphones, your rattles, your whistles, your placards, your experience and passion for decent mental health care and make your voice heard. 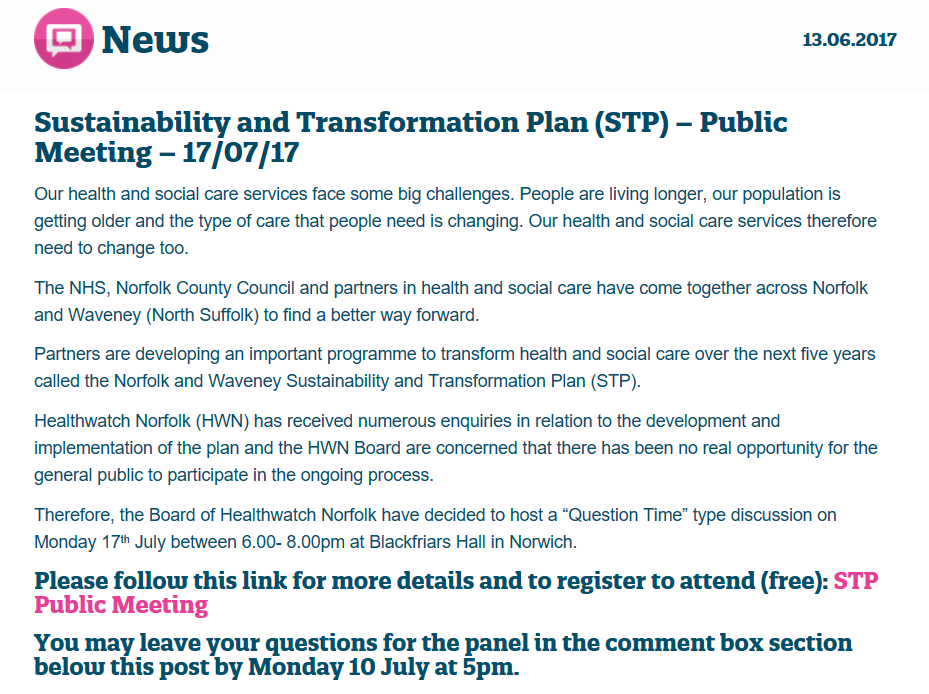