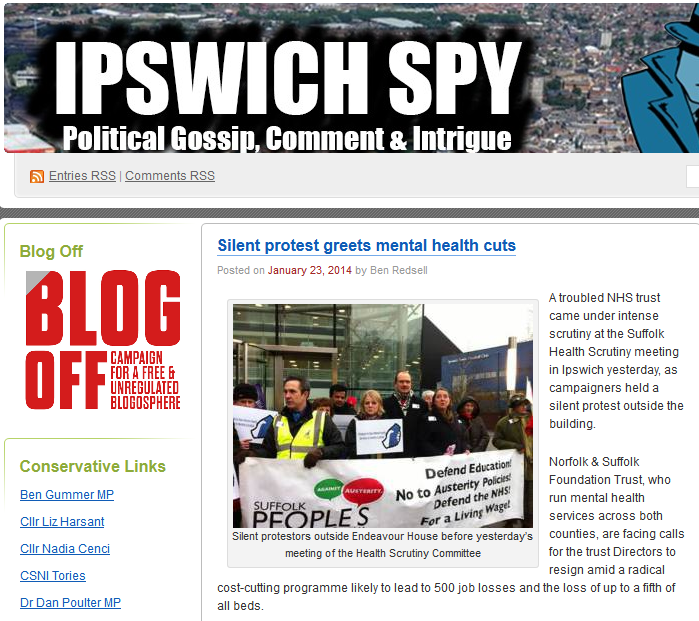 “I attended most of the Health Scrutiny meeting today. Despite a damning report by HealthWatch Suffolk and a host of challenging questions by Health Scrutiny Councillors the Directors of NSFT stuck to their guns – there is no crisis in mental health services in Norfolk and Suffolk. We were told there is no shortage of beds in Suffolk, but given no figures to back this statement up.

“How 20% cuts, in an area of health that has been routinely underfunded can be achieved without impacting further on patients is a mystery. I know that there is a significant decrease in qualified professional mental health staff, but an increase in administrators. I remain deeply concerned at access to mental health services for people in rural areas. We were told that the vacancy rate for an already reduced team in West Suffolk is around 18%. All this comes at a time of rising suicide rates amongst patients known to mental health services. It’s about time local Dan Poulter MP & Junior Health Minister stepped in on the side of patients and called an urgent halt to the cuts, listened to its own local experts and carried out a proper assessment of need. People’s lives depend on it.”

Ipswich Spy reports that ‘NSFT declined to comment.’ As usual, click on the image to read the full story.

@redvixen100 @AmazonHelp Not strictly relevant but may benefit the mental health of you and others. Just go to your credit card provider and ask them to do a chargeback. which.co.uk/consumer-right…

@MelanieCraigNHS @SouthNorfolkCCG @NorthNorfolkCCG @NHSWSCCG @IESCCG Norfolk and Waveney NHS bureaucracy is a disaster. Unlike Suffolk, still a STP rather than an ICS. Spent hundreds of thousands of pounds of NHS funds on management consultants from @BCG and others to do a bad job of the work of which they were incapable despite £100K+ salaries.