Today, members of the Campaign attended the NSFT Board meeting in Ipswich.

Bosses at the trust running mental health services in Suffolk have pledged to fight for their “fair share” of funding as they bid to turn round the fortunes of the organisation.

The Norfolk and Suffolk NHS Foundation Trust is hoping for additional funds of up to £8million for the next financial year, which comes on the back of a promised cash increase nationally.

Negotiations are currently taking place between the trust, which was officially placed into special measures last week, and clinical commissioning groups in both counties for 2015/16.

But at a public meeting in Ipswich yesterday, board members voiced concern that the full funding they expect “may not materialise”.

Gary Page, chairman of the trust, said that mental health had not had its fair share of funding in the past and that the organisation wants “every penny” it should get.

He added: “We are prepared to go to arbitration if we don’t get the fair share we are entitled to.”

Following the meeting, a spokesman for the Campaign to Save Mental Health Services in Norfolk and Suffolk group said: “It is good to see the trust are taking a hard line on receiving a fair share of funding for mental health services as a result of our consistent pressure on the issue.”

The Ipswich and East Suffolk and West Suffolk CCGs is among the majority of groups nationally to get an increase in funding, however it is not known yet how this will be placed.

A spokesman for the Suffolk CCGs said: “The CCG is currently in the process of agreeing plans with its providers, no decision on additional funding has been made. Final plans will be published as part of the CCG’s Operational Plan in March of this year.”

NSFT claims it doesn’t receive sufficient funding but Norman Lamb says it does.

Norman Lamb claims NSFT does get enough money but that mental health doesn’t.

NHS England, well, who are they and what do they do? We’ve been campaigning for more than a year and we still haven’t worked it out. Except that NHS England sits between the government and the CCGs.

The seven CCGs claim that they don’t get the money they need from Norman Lamb’s government and NHS England and don’t see themselves as answerable to anybody.

Norman Lamb is the minister directly responsible for mental health but claims to be campaigning against his own government and portfolio.

Norman Lamb claims to be a champion of mental health and claims the credit for initiatives that he refuses to fund.

Norman Lamb tries to blame the CCGs but his government created them.

Norman Lamb tries to blame NHS England but his government created it.

Norman Lamb claims to be powerless but also wants to take the credit for being the minister for mental health.

Norman Lamb is duplicitous: he says one thing, does another. All the time. 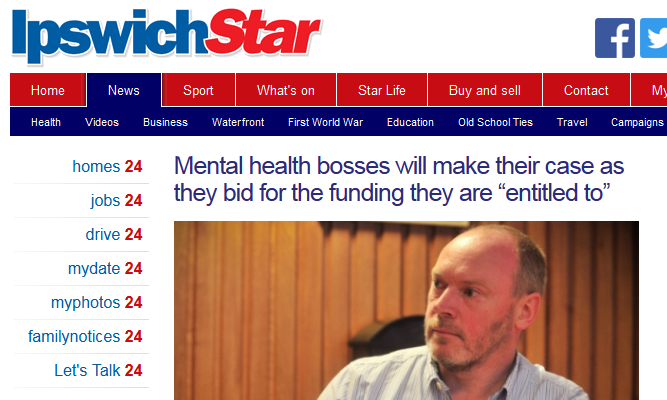 2 thoughts on “Ipswich Star: Mental health bosses will make their case as they bid for the funding they are “entitled to””

@nuwandiss Why score pyrrhic victories over other professionals as services collapse? At @NSFTtweets, acknowledged as the worst mental health trust in the country, the 'medical model' was rejected, as was evidence. Instead, those with SMIs who could not recover were neglected and many died.