We challenged Gary Page, the Chair of Norfolk and Suffolk NHS Foundation Trust (NSFT), to publish NSFT’s data on unexpected deaths after his report to the NSFT Board stated he was “concerned” at the increase in unexpected community deaths from 95 in 2013-14 to 130 in 2014-15. On the same day Gary Page refused to publish, another person died, this time an inpatient on Thurne Ward at Hellesdon Hospital: the ratio of in-patient serious untoward incidents per 10,000 bed days at NSFT has increased by 53 per cent in a single year. Serious Incidents have increased by 41 per cent. People in crisis continue to be let down and suffer life-changing injuries as a result of NSFT’s cuts and the underfunding of mental health services by Norfolk and Suffolk’s seven CCGs.

Our campaign was founded by mental health professionals concerned about what they believed were deaths that would have been prevented before NSFT began closing and cutting mental health services as part of its ‘radical redesign’. Evidence from the National Confidential Inquiry into Suicide and Homicide by People with Mental Illness shows that when specialist teams are closed, the suicide rate is higher:

NSFT closed its Assertive Outreach and Homeless teams and degraded many other services, including its Crisis Resolution and Home Treatment (CRHT) teams. A woman died in a Norwich churchyard last month. Suffolk does not have standalone Early Intervention (EI) or Assertive Outreach (AO) teams. The restoration of these vital teams were part of our moderate and evidence-based demands when our campaign was founded two years ago.

We wrote to NSFT more than six weeks ago asking for the unexpected death information to be released under the Freedom of Information Act 2000. NSFT has a statutory obligation to respond within twenty working days. We have still not received the information.

We have, however, received an anonymous artist’s impression of the withheld chart. Even a child could spot the change in the monthly rate of unexpected deaths, which have increased rapidly from a steady-state rolling average of just over four per month to just under seven. That’s an increase of about 70 per cent.

It took NSFT twelve months to recognise and discuss this trend at a Board meeting. Even then, it was hidden in a single paragraph on page 166 of a 179 page bundle of documents.

Astonishingly, another £36 million of cuts to mental health services are planned. 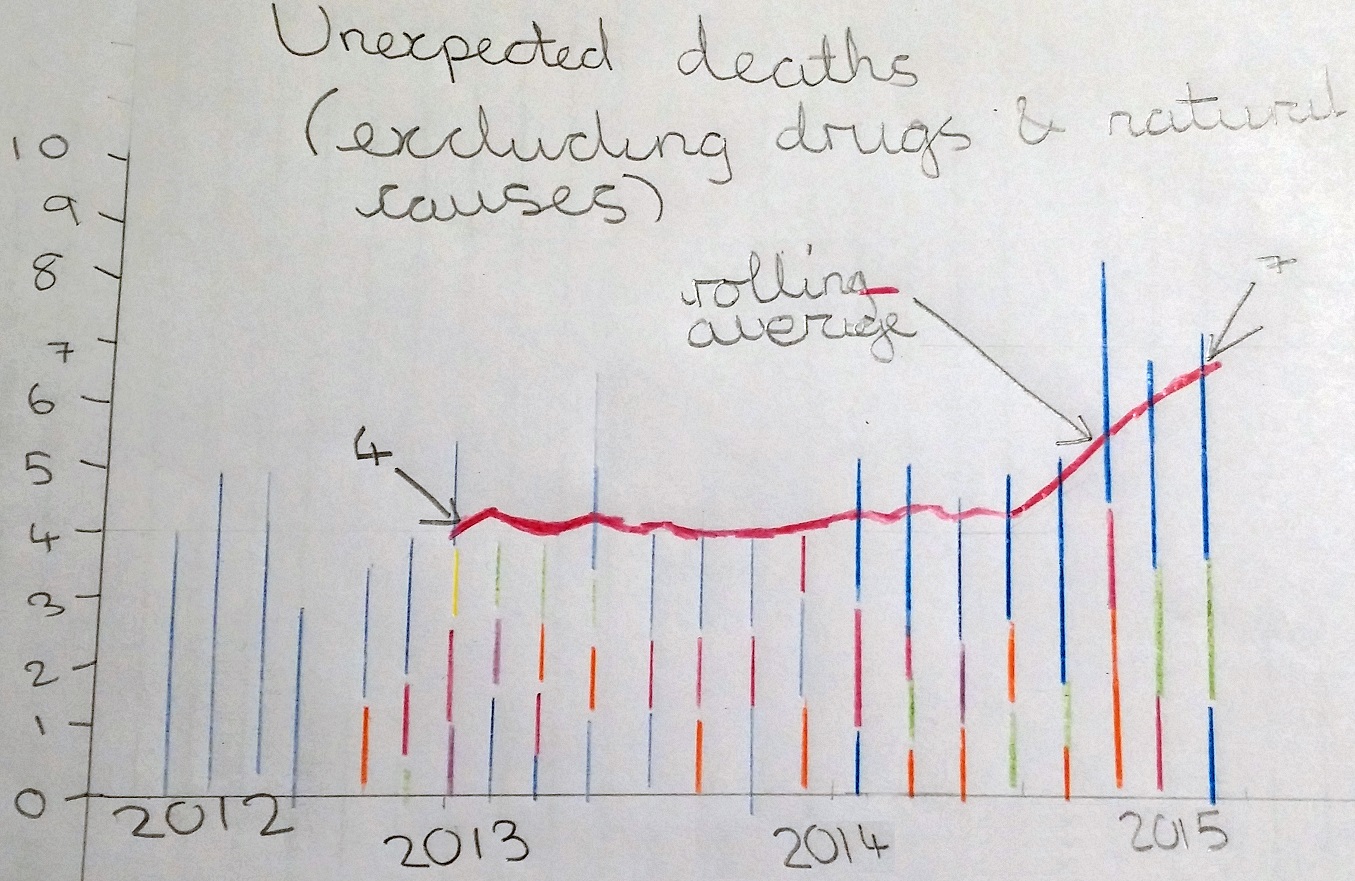