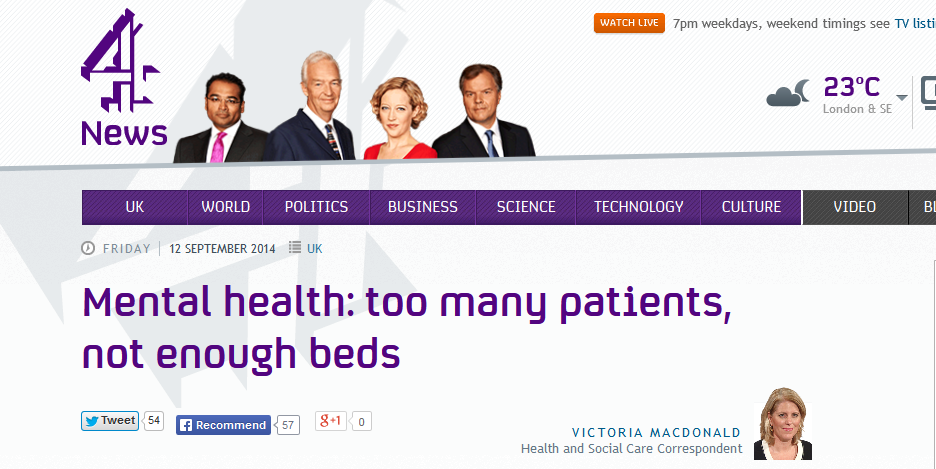 There have been times in the past couple of years when they have sent 30 or 40 people sometimes hundreds of miles away because their beds have been full. A new management team has recently been brought in and they have managed to reduce this to seven or eight.

But when I asked the new chief executive Michael Scott how they were faring this week, he said they were “very busy”. And I was left with the distinct impression that this was an understatement.

A campaign to improve mental health services in Norfolk and Suffolk was started last year by a despairing social worker, Terry Skyrme. He works for one of the crisis teams, so is at the frontline, when patients are feeling their worst. He booked a room for 100 people. Three hundred turned up.

‘Never known it this bad’

“I have worked in mental health since 1972 and I have never known it this bad,” he said. “Yesterday I was on duty for referrals under the mental health act. We had eight referrals but there were no beds available.”

This is not a situation that is just affecting Norfolk and Suffolk – it is a problem at mental health trusts right across England. There are too few beds, too many patients, there is too little money and according to our research, the funding is only getting worse.

So the services needed for the most ill, the crisis teams, or those which help keep patients out of hosptial and well, are feeling the brunt of these cuts. And it is not just the pressure on beds, these cuts are also being felt by the police.

Channel 4 News has been passed a letter written less than a month ago by an inspector. The letter says a man, detained in King’s Lynn, should have been assessed under the mental health act, but no bed could be found.

The letter states: “Our Custody Officer now finds himself in a position where they are being asked to detain someone in a cell without clear lawful authority to do so, which may amount to unlawful imprisonment.” It also says this was “inappropriate” and it was an ‘”unsuitable environment” for such a person.