Today, officials meet at NHS Improvement (NHSI) to decide whether Norfolk and Suffolk NHS Foundation should be released from Special Measures.

Usually, when a health trust is put into Special Measures, money follows from commissioners to help put things right. This has not happened at NSFT. In fact, it has been difficult to get NHS bureaucrats to even turn up for NHS meetings about turning NSFT around. NHS England and The Magnificent Seven CCGs have failed to make a dent in the £70 million annual shortfall in NSFT’s funding.

We’ll discover what the Care Quality Commission (CQC) thinks of NSFT on Wednesday.

NSFT’s management is certainly better at ticking the CQC’s boxes than it was: it could hardly be worse, could it?

We know that NSFT’s staff try their best with inadequate resources.

We expect that the deeply inadequate services for children and young people (CAMHS) will be heavily criticised.

We know that more and more NSFT patients have died during Special Measures. 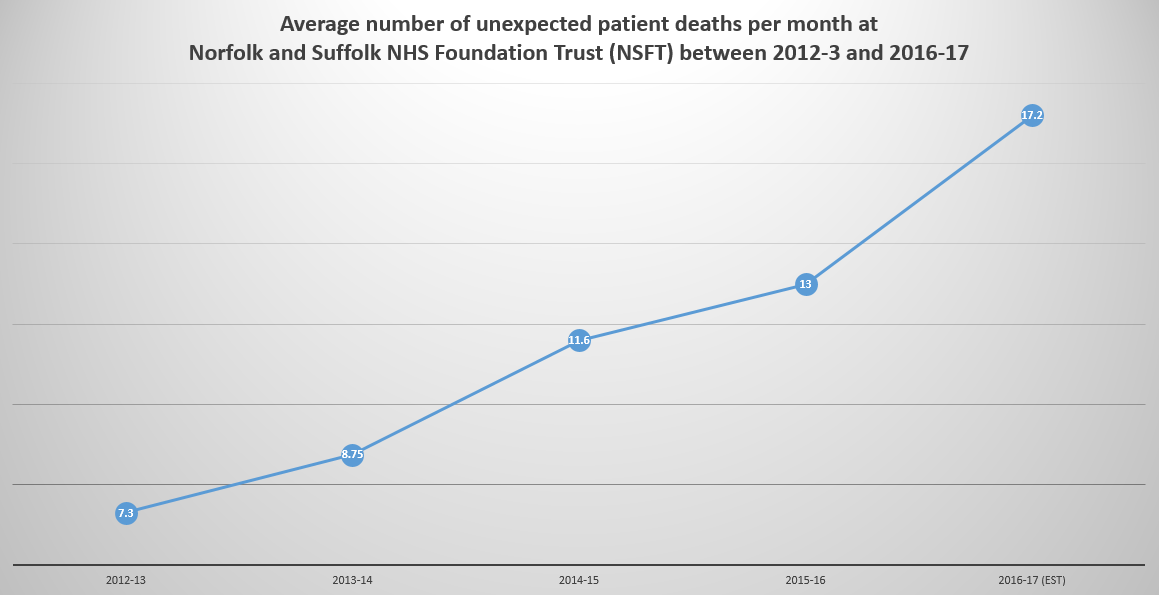 NSFT’s Board still has the Director who demanded that our questions about the rising number of unexpected deaths at NSFT should struck from the Board minutes.

The CQC and Monitor told NSFT that it needed to have enough local beds for local people: it doesn’t.

NSFT still doesn’t have enough beds. Last month NSFT managed to fill the private Mundesley Hospital with more than thirty patients and could find nowhere to send urgent admissions and recalls – locally, nationally, NHS or private. NSFT has continued to close beds and tried to a further close 20 beds in King’s Lynn.

The CQC and Monitor expected local commissioners to fund NSFT properly: they haven’t.

While more and more people are dying, while NSFT doesn’t have enough beds, while commissioners fail to fund NSFT properly, how can NSFT be said to be improving?

Last time NSFT’s Board was let loose with foundation status, it destroyed mental health services and wasted tens of millions of pounds with the disastrous radical redesign. Can NSFT’s Board really be left alone and unsupervised again?

4 thoughts on “Newsflash: Meeting at NHS Improvement today to decide whether Monitor should release NSFT from Special Measures”