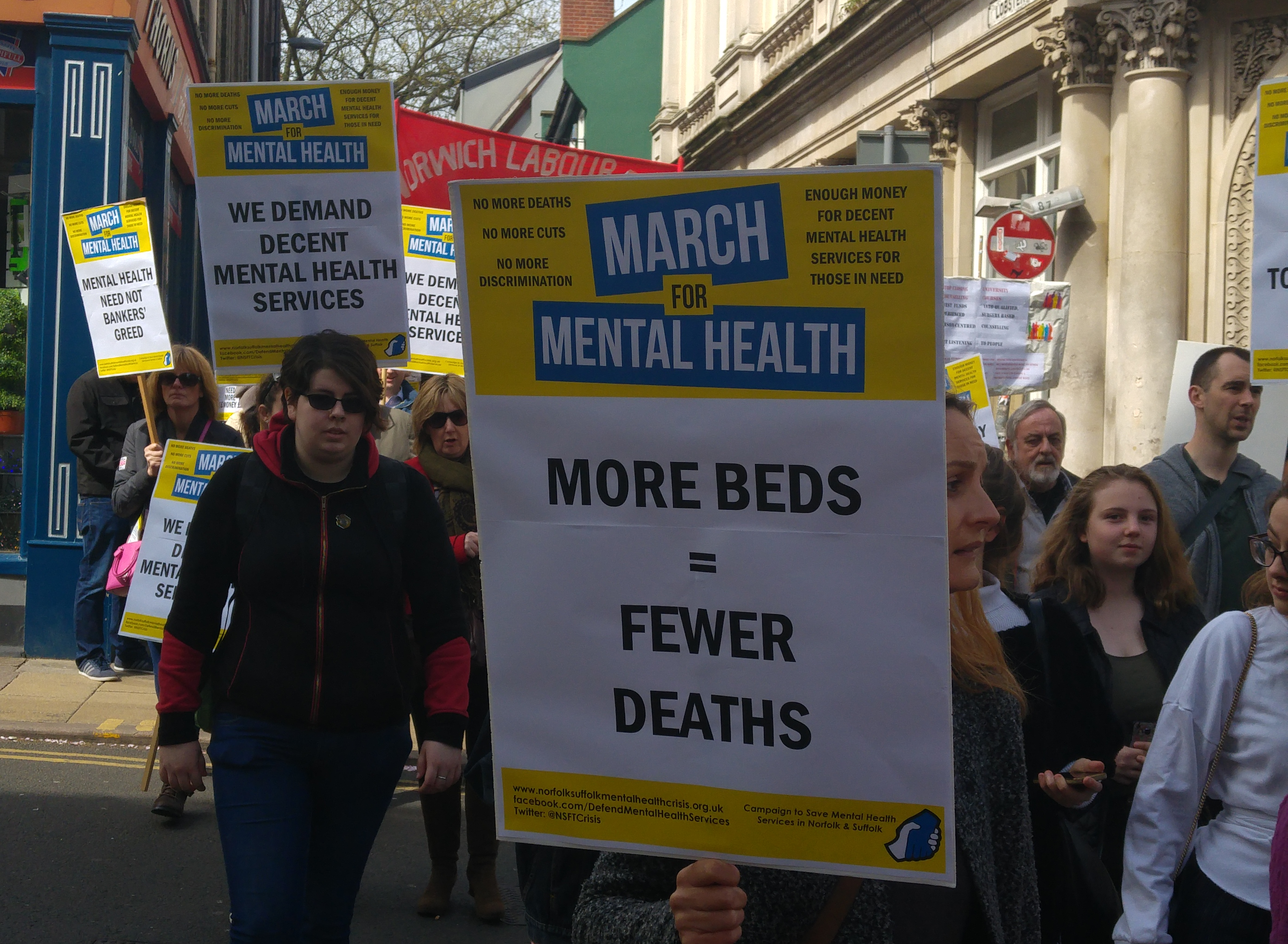 We will be there to protest against mental health cuts, NHS privatisation and the imposition of CCG hatchet man Antek Lejk as the Chief Executive of Norfolk and Suffolk NHS Foundation Trust (NSFT) despite the objections of service users and carers.

Original article follows and is still worth reading:

Since the creation of the Clinical Commissioning Groups in 2013-14, the share of the Norfolk NHS budget received by Norfolk’s secondary mental health care trust, Norfolk and Suffolk NHS Foundation Trust (NSFT), has fallen by 8.3 per cent as referrals to NSFT have risen by 48 per cent.

Norfolk and Suffolk’s mental health trust is the only mental health trust to be rated Inadequate by the care regulator, the Care Quality Commission (CQC), and placed into Special Measures by the regular of NHS Trusts, NHS Improvement (NHSI), not just once but twice.

While mental health services were trashed, the number of unexpected deaths soared.

Even after this disaster and the CQC clearly stating that NSFT does not have enough beds or staff, mental health has not received the funding necessary to deliver decent community services and to prevent the transportation of people in a mental health crisis to private hospitals nationwide.

While patients and carers have seen mental health services cut and front line staff have received either pitiful pay rises or nothing at all, NHS bureaucrats have awarded themselves a pay bonanza.

Now, having destroyed mental health services for children and young people (CAMHS) through cuts which the NHS Benchmarking Agency discovered were the largest in the country and three times the national average, the Norfolk ‘commissioners’ are planning to go out to tender for services and the EDP has exposed plans by tax-exile Richard Branson’s Virgin Care to bid.

We need decent funding of mental health services, not privatisation.

Join us on Thursday 1st March at Carrow Road outside the South Stand at the entrance for the Top of the City where those responsible for the disaster in mental health services and the planned privatisation are gathering for their ‘Breaking the Mould’ event. They’re actually ‘Breaking the NHS’. Assemble at 11.15 a.m. for a protest between 11.30 a.m. and noon.

The ‘Breaking the Mould’ event is being chaired by Patricia Hewitt who has made a most remarkable political journey from New Labour’s Health Secretary to the public face of vicious NHS austerity cuts in Norfolk via ‘consultancies’ for private healthcare.

Patricia Hewitt is being assisted by Alistair Campbell which is fitting given his role in defending the indefensible during the Iraq War and producing the ‘dodgy dossier’: commissioners in Norfolk have their own ‘dodgy dossier’ in the form of the fixed, flawed farce of the mental health beds review.

Who better to act as the cheerleaders of the privatisation of NHS mental health services than Patricia ‘Doing A Hewitt’ and Alistair ‘Dodgy Dossier’ Campbell?

Join us and make your voice heard before it is too late! 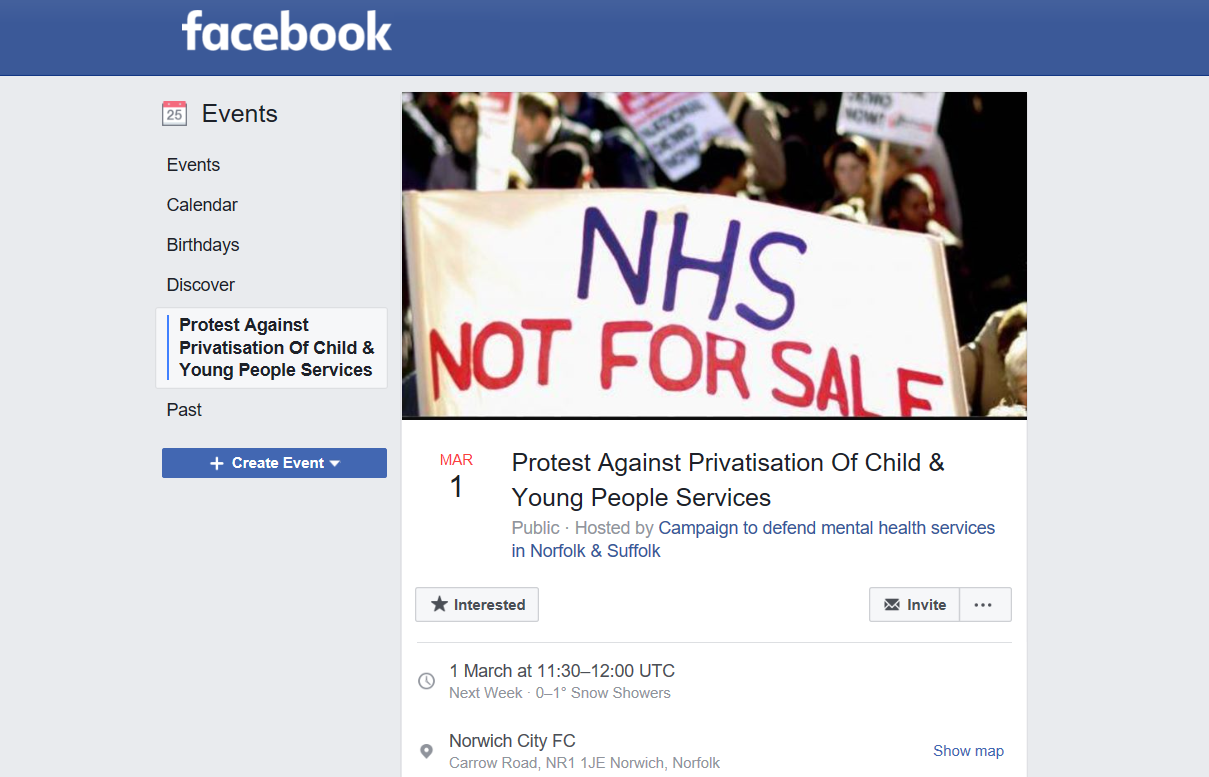 The recipient of the 'got away with it' email is the so-called media guru of former 'Professor' @warren_nsft. He is the boss of the sender. This email want sent by some obscure department with which @warren_nsft had no contact. In fact, quite the reverse. pic.twitter.com/1g6JGAFBTz

If Mark Prentice is sacked, it won't be for what he wrote. It will be for sending it outside the organisation by accident. This is @NSFTtweets. So, expect Prentice to be promoted. Who is undertaking the investigation? It will be other managers. Expect a stitch-up (again).

The email was sent by Mark Prentice to his boss @OnTheLevelPR1 Steve Gladwin, who toured the media with former 'Professor' @warren_nsft yesterday and last week. Would Prentice have sent that email if he thought his boss would disagree? @warren_nsft works hand in hand with Gladwin twitter.com/LibrarySister/…

@emilyltownsend @NSFTtweets @suffolkpcn @DeborahWatsonPR @SUFmentalwealth Quite simply, @stuartr70 @Norwichowl and the Board of @NSFTtweets are not up to the job and have the wrong values. 'Further improvements'. Tell that to the families of the dead. More spin from the toxic trust. Will @NSFTtweets 'get away with it (again)'?

I received that @NSFTtweets NHS email - and here’s why I forwarded it edp24.co.uk/features/steve…