Because of her then status in the Norwich Labour Party, and the frequent use of politically-correct buzzwords like ‘recovery’ and ‘ImROC’, many people trusted Maggie Wheeler and her Board when it promised ‘new services will be as effective as they are now, if not better’ as a result of the Trust Service Strategy (TSS) at Norfolk and Suffolk NHS Foundation Trust (NSFT), better known as the radical redesign. In fact, the ‘improvements’ were massive, botched cuts to mental health services which have had a devastating effect on those who provided or used mental health services. Sadly, the MPs of Norfolk and Suffolk, then all Conservatives or Liberal Democrats, said nothing, as loyalty to the Coalition Government appears to have been more important to them than their constituents’ lives. Nearly the entire political establishment of Norfolk and Suffolk united behind the radical redesign.

The ‘radical redesign’ was condemned by the King’s Fund in the Health Service Journal (HSJ) and is widely regarded as an unmitigated disaster which resulted in NSFT becoming the first mental health trust in England to be placed into Special Measures by Monitor after being rated inadequate by the Care Quality Commission (CQC). NSFT’s Board ignored warnings about the impact of the massive radical redesign cuts from its own staff, service users and carers as well as the Royal College of Psychiatrists, the BMA and Unison. NSFT wasted millions of pounds paying its own staff to leave in the midst of a recruitment crisis.

Maggie Wheeler retired from her two-days-a-week £42,500 per year job as the Chair of NSFT in April 2013 after pushing through the radical redesign, just as the cuts began to bite.

Maggie Wheeler then became, quite incredibly, Chair of the Norfolk & Suffolk Dementia Alliance.

Even more astonishingly, Wheeler received an honorary degree from the University of Suffolk for services to mental health. Apparently, Wheeler ‘championed and helped gain recognition for mental health services’ – the University of Suffolk obviously uses ‘champion’ in the same sense as duplicitous Norman Lamb. It is hard to see how ‘highlighting and combating stigma’ is agreeing, year after year, to smaller funding increases for mental health than physical health. It is hard to see how ‘gaining recognition for dementia as a growing challenge’ is closing dementia beds and making doctors and nurses redundant. The honorary degree, of course, had nothing to do with the income from the establishment of the University of Suffolk’s BSc (Hons) Mental Health Nursing degree course.

Maggie Wheeler was also an Associate of a private sector management consultancy, the Foresight Centre for Governance, which, shortly after Wheeler’s retirement, won a £49,990+VAT contract to evaluate the NSFT Board. We are, of course, sure that the tender process was fair and thorough and that the report was good value for NHS money.

Maggie Wheeler remains Chair of The Garage but we’re not going to make a song and dance about that.

The excerpt below, from NSFT’s August 2012 Insight magazine, drips with the hubris of Maggie Wheeler’s time: 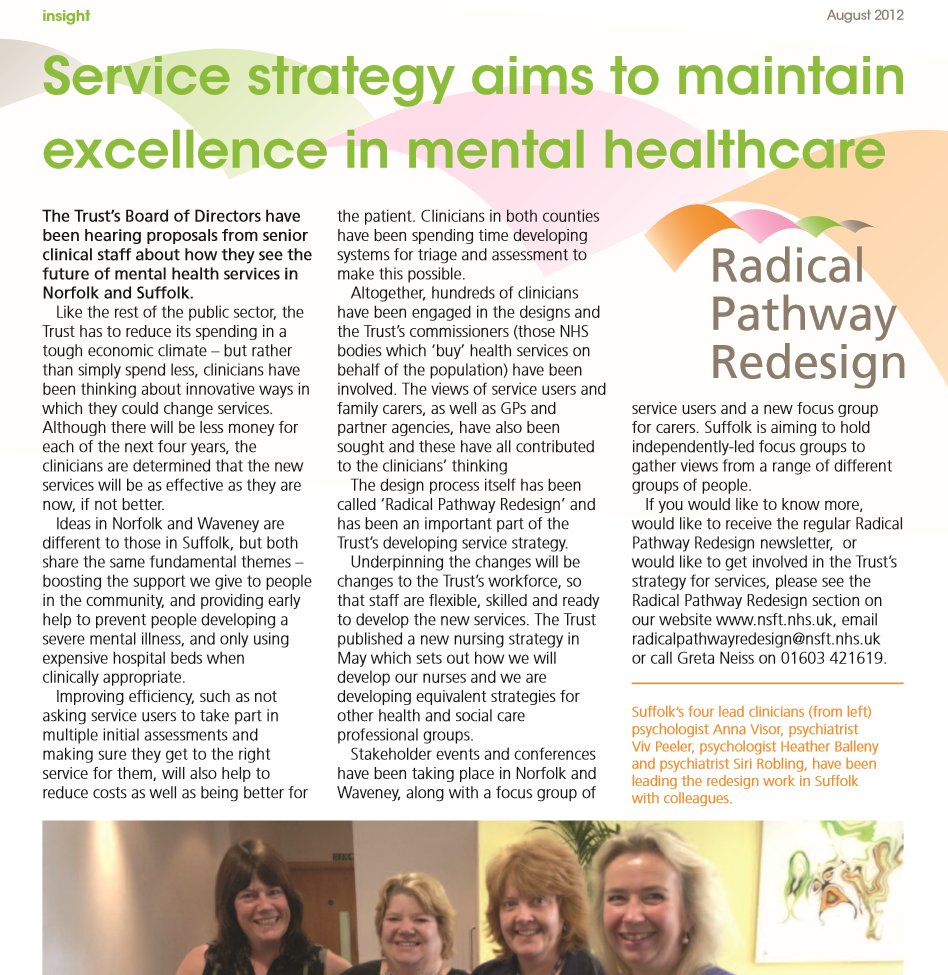 And here is the proof from the report of former Professor @warren_nsft in the @NSFTtweets Annual Report and Accounts 19-20 published last month. Transportation more than tripled in the first three months of the year. Lockdown only occurred on 23 March. pic.twitter.com/aPTzqaSpd5

Here is the first part of the main report by @nikkijfox of @BBCLookEast into the transportation of Kathleen Cantell. Kathleen must be proud of her daughter. The lies from @NSFTtweets start early. The increase in transportation to out of trust beds did not coincide with Covid-19 pic.twitter.com/7rNkyTmEFt

Yes, by having @NSFTtweets transport your loved one to a private hospital in higher risk Darlington to catch Covid-19 without informing you.

Taking a novel approach, @NSFTtweets has decided to keep Covid away from its doors by sending its elderly and vulnerable patients 240 miles away to catch it in a private hospital in Darlington. That's a lot of space between Kathleen Cantell and her family this Halloween. twitter.com/NSFTtweets/sta…