Wonderful coverage and interviews from Sam Russell of the EDP:

Carol Brady, from Norwich, stayed in the care home for six months in 2007, and has used it since for respite care.

“Without Ashcroft I probably wouldn’t be here today,” she said. “The staff are brilliant and understanding of what I’m going through. “They have helped me so much.

“It is absolutely ridiculous that it is closing.

Sarah Streeter, 37 of Norwich, was in and out of hospital for three years before she discovered Ashcroft.

But since accessing its help in 2005, she has not been in hospital at all, instead visiting Ashcroft three times per year for respite.

“It has had such a positive effect on my wellbeing,” she said. “I have had only a few minor crises in the last few years and these have always been resolved by attending Ashcroft.”

When Suzy Parker, of Norwich, heard that Ashcroft could be closing down, she burst into tears.

“I honestly couldn’t believe it. My fiancee couldn’t either, he said it was my refuge, that they took care of me when I was broken,” she said.

The 27-year-old, who suffers from bipolar disorder, stayed at Ashcroft for five nights around Christmas last year.

She said that it was “the best thing” she could have discovered after going through a difficult time.

Read the full interviews on the EDP website by clicking on the image below: 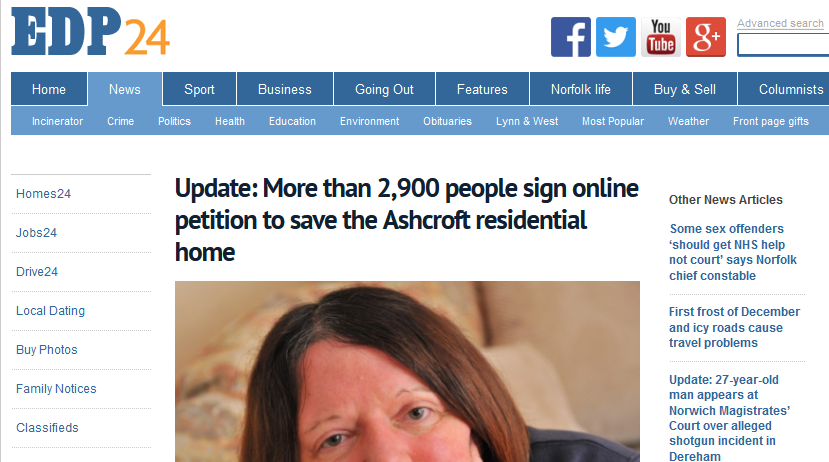 3 thoughts on “EDP: Update: More than 2,900 people sign online petition to save the Ashcroft residential home”