A mental health trust where patients have been punished with a dangerous form of restraint faces being put into special measures.

Inspectors found serious problems at the body that oversees mental health services in Norfolk and Suffolk.

These included patients being held in the face-down prone position and being put in seclusion as a punishment.

But a damning report into the trust released yesterday by the Care Quality Commission revealed prone restraints were not only still being carried out at the trust’s secure unit, they were being used as punishments.

The report said: ‘Some patients told us that restraint and seclusion were used too frequently at the Norvic Clinic.

‘We were concerned about the high levels of face down (prone) restraint and that there was a punitive attitude towards patients. We observed that some episodes of restraint and seclusion may have been punitive.

The CQC suggested the trust’s problems were the fault of senior management, saying there was ‘a lack of leadership, support and awareness’ in some areas.

But it praised frontline staff for being ‘kind and caring’ and rated the trust as ‘good’ in the care category.

It was rated ‘inadequate’ overall however and the CQC has recommended to health services regulator Monitor that it go into special measures. 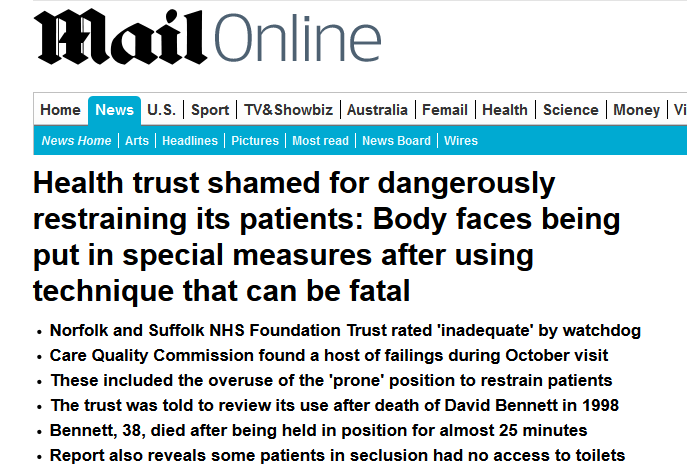 'It is devastating to see how hopeless she is': Detaining people with special needs is inhumane inews.co.uk/opinion/detain…

Tomorrow, @NSFTtweets interviews for its new £175k Chief Executive to do the job that former Professor @warren_nsft lost interest in long ago. We strongly suspect that eternal student, @NHS_ELFT crony and champagne charlie @masonfitzgerald is the internal candidate. #MuppetShow pic.twitter.com/PcKTz4ljus

Why isn't this important reporting by @nikkijfox and @mattcprecey given more prominence by @BBCNews? inews.co.uk/news/health/co…