A sharp rise in the number of mental health patients dying unexpectedly coincided with the responsible organisation cutting nearly a quarter of its inpatient beds.

In 2013 NSFT embarked on a “radical redesign”, cutting services while saving million of pounds.

NSFT governor Sheila Preston, whose son Leo died unexpectedly while in the care of the trust, told Panorama: “Before the changes (the radical redesign), Leo was seen at least once a week.

“After the changes I asked his nurse and she hadn’t seen him for four weeks.” 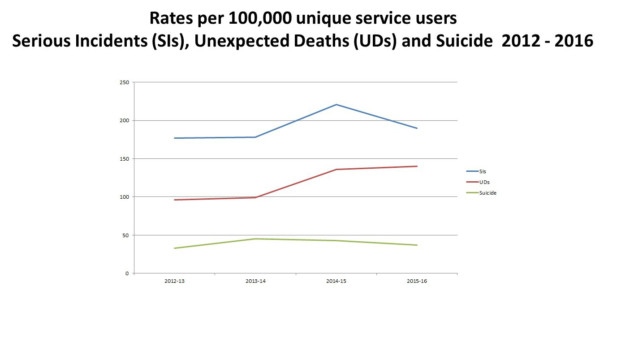 ‘A devastating expose of the failure of mental health services’ – Campaigners

Those involved in Monday night’s Panorama show, which focused on failings at the region’s mental health trust, said they spoke out to show how bad services had become.

Sheila Preston was featured on the BBC One show after her son Leo, who was being treated by the NSFT, died from a suspected accidental overdose late last year.

“I felt that I had to inform people of what I consider is happening concerning the care of mentally ill people,” she said after the programme was broadcast.

Emma Corlett, a former nurse at the NSFT, who also featured on the show, said services should not have been allowed to have got into such a state when MPs and mental health professionals had known for years the problems faced by the NSFT.

A spokesman for the Campaign to Save Mental Health Services in Norfolk and Suffolk said the BBC show was a “devastating exposé of the failure of mental health services”.

Read the EDP’s report in full by clicking on the image below. Even better, support expensive investigative journalism, which is so crucial to our campaign, by buying a copy of the newspaper.

We are meeting our region’s MPs on Tuesday 5th July in London to lobby for a public inquiry into @NSFTtweets. If you want to come with us/see us off, or share your story/concerns with the media please DM for details. Please contact your MP and ask them to attend on your behalf.

.@labourlewis asking @sajidjavid to meet with our members (many are bereaved) on 5th July when we go to London to lobby our MPs. We need all Norfolk and Suffolk MPs to work together for their constituents and ensure @NSFTtweets delivers safe care. fb.watch/dXUlupYVOY/

How many have died at @NSFTtweets ? Here’s a desperately sad death of a 21 year old who was clearly crying out for help. No Prevention of Future Deaths report - again. RIP edp24.co.uk/news/inquest-n…