The full CQC report can be downloaded as a pdf.

Some excerpts, which can be summarised as: lack of community staff, lack of beds and organisational chaos. If this is the situation now, what will it be like at the end of March when more than one quarter of community team staff will have been made redundant?

People’s diversity, values and human rights were not always respected. The trust had developed ‘patient pathways’ that supported the admission to hospital of adults of any age, with the exception of those living with dementia. Whilst these arrangements reflected national guidance, the developing service posed risks that people’s individual needs may not always be met. For example, we found that a person aged over 70 years with mobility problems on a ward where their peers were considerably younger and fully mobile. This person said that staff, “Didn’t realise how much my mobility was an issue.” They told us that they had been allocated a bedroom that was too far from a toilet, or shower, which presented difficulties for them. However, they had raised this with staff who promptly offered them a more suitable room. This person told us that they were happy on the ward, but indicated that at times the ward environment could be challenging saying, “A little old lady might be quite frightened here.”

“Two people told us that they did not have any clean clothes to change into. Both these people looked dishevelled. One said that they had asked staff to arrange for clothes to be collected from their home.”

“People’s needs were not always assessed in a timely way. We found that those people who required urgent care and treatment were assessed promptly. However, people whose needs were less urgent waited disproportionately, up to two months to be fully assessed by the community service. Since the introduction of new arrangements the number of people that community based teams provided with assessment, care and treatment at any one time had increased rapidly. This increase constrained the teams’ capacity to meet people’s needs.”

“We found that the simultaneous major re-organisation of both community and hospital based services had adversely affected direct patient care in both areas. For example, the community mental health teams told us that they had limited capacity to offer preventative, psychological or other work to people. The trust attributed this to the team supporting some people in the community whilst they waited for an inpatient bed to become available. The trust’s plans to increase the teams’ capacity had not been implemented at the time of our inspection. Community-based staff told us that some people and their carers had expressed dissatisfaction with the service they received.”

“Care and treatment was not always planned and delivered in a way that ensured people’s safety and welfare. Two people identified some concerns about their individual care and treatment and we brought them to the attention of senior ward based staff who agreed to look into their concerns.We noted that some people were placed on wards that provided care and treatment at a higher level than they required. For example, people with long term needs were being cared for within a psychiatric intensive care unit. However, a review of the use of this unit was being undertaken by the trust.”

“When people went home from hospital on a temporary basis the requirement to reserve their bed was risk assessed according to the likelihood of them returning unexpectedly. However, these arrangements meant that there was a risk that a person may be accommodated on a different ward on their return. This did not support continuity of care for people.” 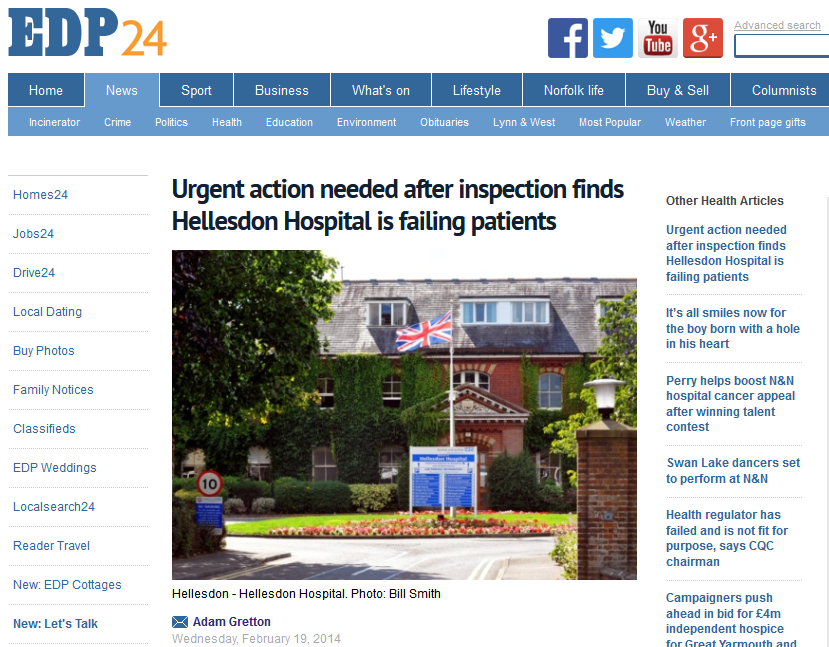