A 32-year-old with Asperger’s and emotionally unstable personality disorder took his own life when NHS 111 call handlers hung up on him after months of “frustrations” with mental health services.

At the inquest into his death, John Worthington’s parents have said their son was “failed” for years in his search for help.

By the summer of 2017 he had reached a crisis point and called NHS 111 four times in the early hours of June 6.

During the fourth call John made an attempt on his life after a pathways advisor terminated his call. Paramedics were dispatched and police gained entry to his flat at St Augustine’s Gate in Norwich.

John was resuscitated and taken to the intensive care unit at the Norfolk and Norwich Hospital (NNUH). But the brain injury he had sustained was so severe he did not survive, eventually passing away on August 11.

The electrician and former nightclub manager had spent two years trying to get help from mental health services, and saw his GP 29 times in a single year.

Before the radical redesign cuts, there were mental health link workers in GP’s surgeries.

Dr Jones told the court: “When he was referred we made it clear there was an underlying suicidal ideation. He told me a number of times when he was angry or annoyed he might feel like doing something.”

He added: “John was referred on December 19 and given an appointment on May 10. That is about a week shy of five months. There is no guarantee patients will be seen within 28 days but under ideal circumstances it would not be another four months for someone to be offered an appointment. The risks were made known and clearly stated on the referral.

“The fact is [NSFT] are saying they are chronically underfunded. It is my experience as a GP who has worked in two practices with a high prevalence of mental health issues it can be sometimes very difficult.”

James Forrest, charge nurse at the mental health liaison team at NNUH, met with John at A&E on December 21, 2016 after he had again threatened suicide.

John was placed on a patient of concern list at the GP and given an admissions avoidance care plan, which recommended he call NHS 111 to avert the need for A&E attendance.

On June 6 he called NHS 111 but was met with pathways advisors who “did not communicate effectively, professionally or with appropriate warmth”, according to a service delivery report from IC24.

During one call, according to transcripts seen by this newspaper, he told the call handler: “You’re terminating the call because you are not patient enough to listen to a speech impediment”.

A root cause analysis report of the incident from IC24 investigated four calls from John to NHS 111 between 2.12am and 2.53am.

“All of the calls received were difficult for all concerned,” the report said. “The patient was suffering with communication problems and was finding it hard to articulate.

“This caused the patient to become incredibly frustrated with all who dealt with his contacts. Unbeknown to the call handlers the deceased was known to mental health services and had been directed to call NHS 111 by the local crisis team.”

After the inquest, John’s parents, Keith Murdoch and Samantha Harrowven, said their son was a “wonderful young fellow” who had been failed by mental health services.

“There were definite failings with the NHS 111 calls”, said Mrs Harrowven.

“The clinician on the phone said he was not known to them and there was no recognition he was at risk,” she said. “All through the call he was ranting on about mental health services failing him.”

She added: “Three years ago I called 999 saying I need my son sectioned. He was screaming down the phone saying he was going to kill himself.”

“He wanted answers on why he felt the way he did,” added Mr Murdoch. “Everything was so slow. Ultimately I do not think mental health teams did enough.”

John was described as a “selfless” and “much loved big character”.

“He was one of those people who was intelligently brilliant and superb with his hands,” said Mr Murdoch.

How many more appalling unnecessary deaths must Norfolk and Suffolk endure?

How can the Chair of Norfolk and Suffolk NHS Foundation Trust for the last four years of cuts and Board incompetence, investment banker Gary Page, honourably remain in his post?

When are the CCG’s going to fund mental health services properly? NSFT’s share of Norfolk’s NHS budget has fallen by 8.3 per cent since the CCG’s were established despite referrals rising 48 per cent. Over the same period, the CCG bureaucrats have awarded themselves huge pay rises and disgraced and unaccountable Patricia Hewitt has mysteriously become Chair of the latest cuts vehicle, the STP.

When is the shameful Board of NSFT going to begin genuine engagement with the bereaved, patients and carers rather than ending meetings early to avoid questioning?

And, of course, we have yet another narrative verdict because people with poor mental health cannot die of suicide in Norfolk.

This tragedy is featured in both the EDP and Norwich Evening News today.

High quality, investigative reporting is so important to our campaign. Buy a newspaper if you can. If not, click on the image below to read the full article on the Norwich Evening News website. 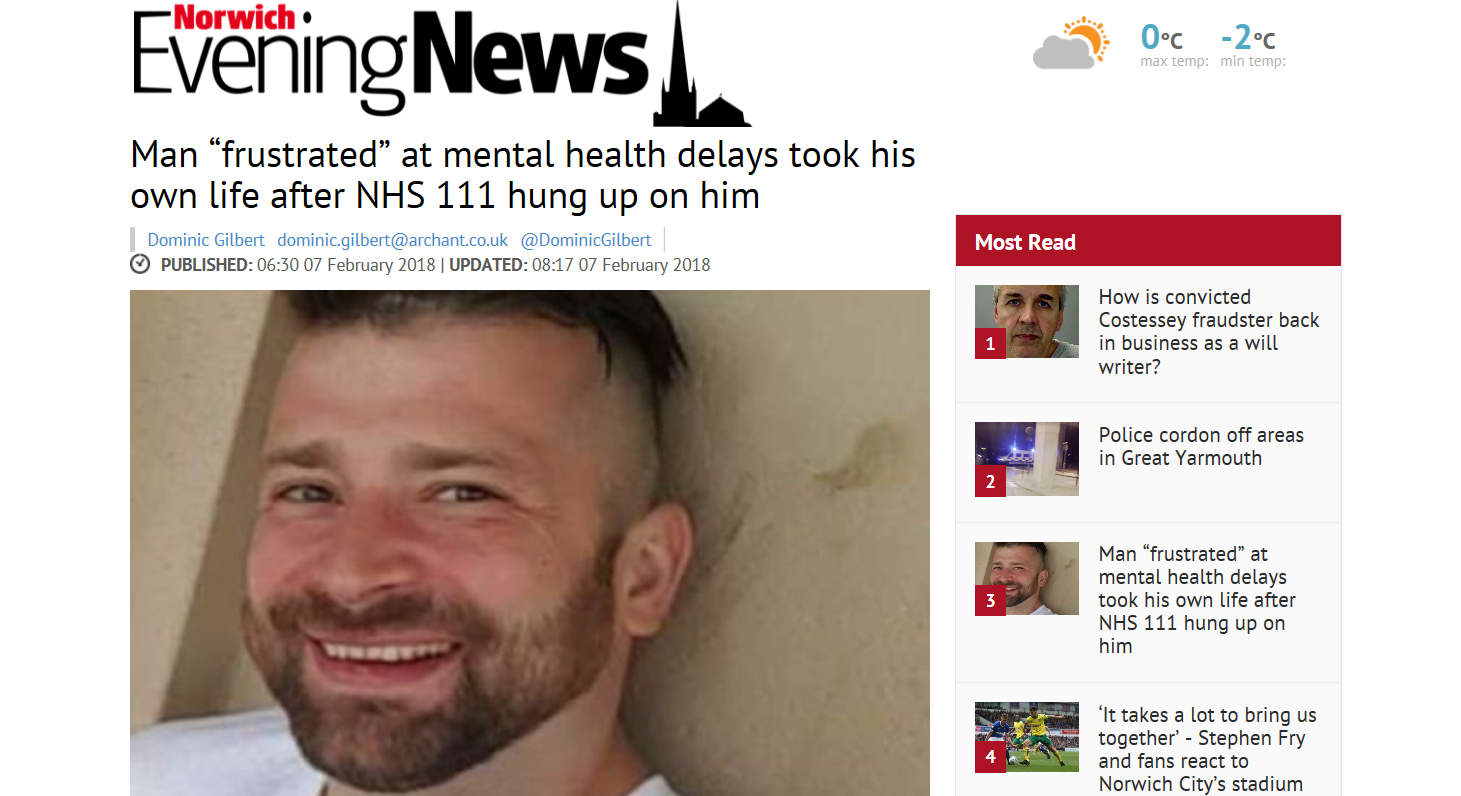 One thought on “Norwich Evening News: Man “frustrated” at mental health delays took his own life after NHS 111 hung up on him”