One of Norfolk’s clinical commissioning groups (CCGs) is due to fall short of the amount of money it should be putting towards mental health despite latest figures showing the number of suicides in the area has rocketed.

Research from the Royal College of Psychiatrists (RCP) has shown Great Yarmouth and Waveney CCG will not meet the national mental health investment standard for this year or the next.

They are one of just nine in England who have said that they will be unable to meet the standard set by the government for 2017/18 and 2018/19 because they are in too much debt.

But mental health campaigners have called the situation “intolerable” and pointed to the most recent figures available from the Office for National Statistics showing an increase in the frequency of suicides in Great Yarmouth and Waveney.

According to the RCP, money intended for mental health services is having to be directed elsewhere to plug spending gaps.

What have the MPs for Great Yarmouth, Brandon Lewis, and Waveney, Peter Aldous, got to say about this disgrace?

A spokesman for the Campaign to Save Mental Health Services in Norfolk and Suffolk said: “The latest figures published by the ONS show an 84pc increase in the frequency of suicides in Great Yarmouth, adjusted for population size and age, between 2010-12 and 2013-15 which is 13 times worse than the national average increase. For Waveney, the increase in the frequency of suicides is 52pc which is more than eight times worse than the national average increase. Now, we learn that Great Yarmouth and Waveney CCG is one of only nine commissioning groups in England which claims it cannot meet the mental health standard this year or next.

What is Norfolk and Suffolk NHS Foundation Trust (NSFT), the Norfolk Coroner and the Care Quality Commission doing about these staggering increases in the number of suicides.

Increases of this magnitude make the undertaking of the Mental Health ‘workstream’ of the secretive Sustainability and Transformation Plan (STP) cuts process, ‘led’ by the NSFT Chief Executive, Michael Scott, to reduce suicides by ten per cent over five years look dangerously inadequate and unambitious.

Then again, you can bet that the STP-cuts mental health targets (which the bureaucrats call KPIs), all remarkably multiples of ten (20%, 10%, 10%, 10&%, 10%, 70%), were plucked from the air and developed on the back of an envelope rather than based upon serious analysis and clinical evidence. Or do the bureaucrats only know their ten times table?

We told the EDP:

“Given the appalling increase in suicides and years of cuts and bed closures, diversion of money meant from mental health is intolerable. We need money invested in front line mental health services not trousered by the NHS bureaucracy or diverted to pay off debts.”

As reported previously in the EDP, Great Yarmouth and Waveney CCG decided to pay its former Chief Executive, Andy Evans, £15,000 per year more than the national recommended maximum salary while running up the debts it now needs to pay back. The Chief Executive of NSFT, Michael ‘Payrise’ Scott, pocketed a pay rise of 25 per cent, taking his salary to £175,000 which is far higher than the salary of the Prime Minister.

Investigative reporting by the EDP exposed that as services have been cut and the real-terms salaries of front line staff have fallen, the wage bill for CCG governing body members across Norfolk and Waveney has increased by 14.6%. 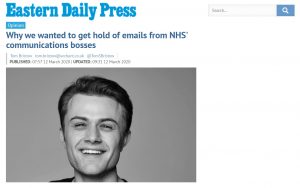 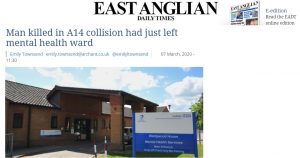