Aisha Gani and James Meikle of The Guardian report:

Official figures say detentions under the Act have risen nearly 10% in a year, causing concern among charities that services are failing to act early.

Mental health campaigners have expressed concern that detentions under the Mental Health Act have risen by almost 10% in England in the past year.

A total of 25,117 patients were subject to the act – up 6.7% from 2014 – of whom 19,656 were detained in hospitals, according to figures released on Friday by by the government’s Health and Social Care Information Centre (HSCIC). 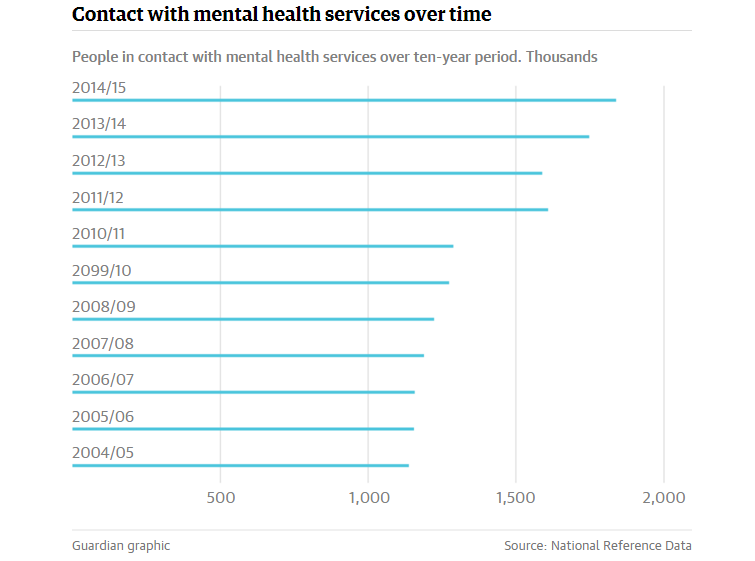 Luciana Berger, Labour shadow secretary for mental health, also expressed alarm. “These latest figures show the growing and unsustainable pressure on our mental health services. It is very concerning that each year more people have become so ill they have had to be detained under the Mental Health Act.

“This comes after the Care Quality Commission (CQC) this week found no real improvements in the community mental health services that help keep people out of hospital. It is unacceptable that too many people are not getting the right care early enough.

“Whilst demand is going up, NHS professionals are being told to do more for less and the number of mental health nurses has plummeted. The Tories are taking mental health services backwards and vulnerable people are being let down.”

Anna Bradley, chair of Healthwatch England, said the organisation had conducted a special inquiry into unsafe discharge patients who had been detained in mental health settings because other options were not available or were held longer than necessary because of difficulties in finding appropriate support in the community.

“We want to see adequate community and on-going support of people with mental health conditions to ensure that care is appropriate for people and graduated to fit their individual needs.

“This could avoid unnecessary detention and further distress for thousands of people,” she said. “This can have a devastating knock-on effect.”

The Campaign to Save Mental Health Services in Norfolk has commented:

Following the closure of thousands of NHS beds, well over two thousand, there are simply not enough.

We would be very interested in the ratio of informal admissions to detentions as here in Norfolk and Suffolk it is frequently impossible to secure a bed, NHS or private, on a voluntary basis without medical recommendation. In fact, people have been refused beds because they are “only suicidal” rather than “psychotic” with sometimes tragic results.

There have been several occasions when medical recommendations, valid for 14 days, have expired before a bed can be found, which is shameful. Yet still beds close – another ten closed in September.

One thought on “The Guardian: Rise in Mental Health Act detentions shows ‘services struggling to cope’”