No new beds for patients in psychiatric crisis will be made available by the region’s mental health trust, despite concerns being raised by the health watchdog over that a shortage of beds “had impaired patient safety and treatment at times”.

We haven’t found a senior doctor at Norfolk and Suffolk NHS Foundation Trust (NSFT) who believes that there are enough beds. When asked about the bed review, the most frequent response is a despairing laugh.

Non-medical operational managers are putting inappropriate pressure on doctors to discharge patients the managers are unqualified to treat and have never even met.

The £58,000 review was commissioned to look into whether Norfolk and Suffolk Foundation Trust (NSFT) had enough beds, after a Care Quality Commission (CQC) inspection last year lifted it out of special measures.

But despite conclusions that no new beds were needed to treat those in psychiatric crisis, the number of days patients spent either in private care or outside the area was at its highest level in a year.

Last week an inquest in Ipswich heard the case of Neil Jewell, a Norwich man with paranoid schizophrenia who died under NSFT’s care in 2014.

There were no beds for Mr Jewell in Norfolk, nor at West Suffolk Hospital where he was originally taken. He ended up at Ipswich Hospital.

NSFT has known for three years that Neil Jewell’s death was due to the unavailability of an NHS psychiatric bed for professional care and Clozapine re-titration.

Meanwhile, a report is suggesting the introduction of cafes to treat mental health patients – with the first one planned for Norwich later this year.

The cafes would “primarily be non-medical” and focus on de-escalation, according to a report seen by the NSFT board of directors. But they would “be supported by clinical staff”.

But campaigners hit out at the plans, saying “people in psychiatric crisis needed beds, doctors, nurses, psychologists, social and support workers rather than platitudes and cups of tea”.

In March, 1,107 bed days were spent either outside of the trust at the private Mundesley Hospital, or outside of Norfolk and Suffolk, at a cost of £737,000.

This compared to 984 bed days in February and 328 in April 2016. Mundesley Hospital was rated as inadequate by the CQC in March this year.

So many irrational cuts proposals contain a ‘cuts café’: it must be a standard cut’n’paste paragraph for the bureaucrats. Cuts cafés were included in the consultation proposals when they closed wards at Carlton Court near Lowestoft and at the Julian Hospital in Norwich.

And it is hoped that by addressing clinical variance across the trust, the current number of beds could be sufficient.

Julie Cave, director of finance and NSFT’s lead director for the bed review, said there were plans to increase bed numbers, but “these beds would not be described as adult acute crisis beds”.

We’ve heard that the bed review is simplistic and that its results were predetermined.

Who is telling us that NSFT has enough beds? Is it a doctor, a nurse, a psychologist or a mental health social worker? Is it a patient or a carer?

No. It is an accountant.

That tells you all you need to know about what is driving this stitch up. Money and cuts.

An accountant should at least numerate. If you were to take mathematically modelling mental health seriously, one of the most important outputs would be the mortality rate.

People are suffering life-changing injuries or dying because of delays in admission.

She added: “We cannot discuss the details of these beds any further during the pre-election period as all such announcements are on hold in this period.

Total rubbish. Parliament is still sitting and so purdah has not yet begun.

Asked about the target is getting out-of-area mental health placements to zero by October 2017, Ms Cave said the report had highlighted “hotspots” in certain areas, with more people being sent out-of-area.

Internally, NSFT is claiming that ‘Norwich should be more like Ipswich’ and admit less patients. But Norwich CCG has a 42 per cent higher incidence of serious mental illness (SMI) than Ipswich & East Suffolk CCG, so how can it have the same admission rates as Ipswich?

NSFT is claiming that central Norfolk NHS and Norfolk County Council teams are ‘overadmitting’ patients when the same teams are admitting fewer patients in North Norfolk CCG area than in the Ipswich and East Suffolk CCG area, despite North Norfolk having a higher incidence of serious mental illness.

It is already very difficult, often impossible, to secure a voluntary psychiatric admission in Norfolk. The Mental Health Act Code of Practice is undermined if the only way to secure admission is tot be detained under the Mental Act when the patient is willing to undergo voluntary treatment.

She added: “We have set ourselves a more realistic timetable of March 2018 to reduce OOA placements to nil…”

Can we believe a word NSFT says?

A spokesperson for the Campaign to Save Mental Health Services in Norfolk and Suffolk said: “NSFT is plumbing new depths, transporting people in mental health crises to private hospitals across the country, some rated inadequate by the CQC, in greater numbers than ever before. The £4.5m NSFT wasted last year could have funded at least 40 high-quality, local NHS beds.

“NSFT’s claim that it has enough beds, following record expenditure of more than £700,000 in just the previous month, is worthy only of North Korea’s state media. For more than three years, NSFT has made excuses as the beds crisis has intensified and the number of unexpected deaths has doubled. Now is the time for the doublethink to end; for a new board and management at NSFT and for commissioners to deliver the investment in local mental health services that the people of Norfolk and Suffolk so urgently need.”

The regulator, the Care Quality Commission (CQC), agrees with us:

But the CQC found “there remained a shortage of beds across the trust and that this had impaired patient safety and treatment at times” and “a lack of available beds meant that people may have been moved, discharged early or managed within an inappropriate service”.

But the STP, a vehicle for cuts in which the Chief Executive of the laughable ‘consumer champion’, Healthwatch Norfolk, is a shameful and enthusiastic participant, wants to ignore the CQC:

However, this is contrary to the objectives of the mental health workstream of the Sustainability and Transformation Plan (STP) for Norfolk and Waveney – which is designed to find ways to save the NHS money.

The CCGs, who co-commissioned the stitch-up report claim not to have read it properly:

A spokesman for all five said: “This review has not yet been fully circulated or published and therefore CCGs are not in a position to comment in detail. “It would not be correct at this time to conclude the answer to NHS mental health service capacity lies in providing more beds.

The bureaucrats are probably too busy drinking tea, eating biscuits and planning their next long-haul holiday financed by their inflation-busting pay rises to read the review they themselves commissioned.

We’ve thought long and hard about why NSFT and commissioners don’t want to open new local beds but would rather waste millions at private hospitals across England.

Sadly, the conclusion we’ve come to is that planning, opening and running new wards would be hard work and they are simply too lazy.

Even better, support the local investigative journalism which is so important to our campaign by buying a copy of the Norwich Evening News or Eastern Daily Press.

Join us on the March for Mental Health on Sunday 30th April at 11 a.m. on Norwich City Hall steps. 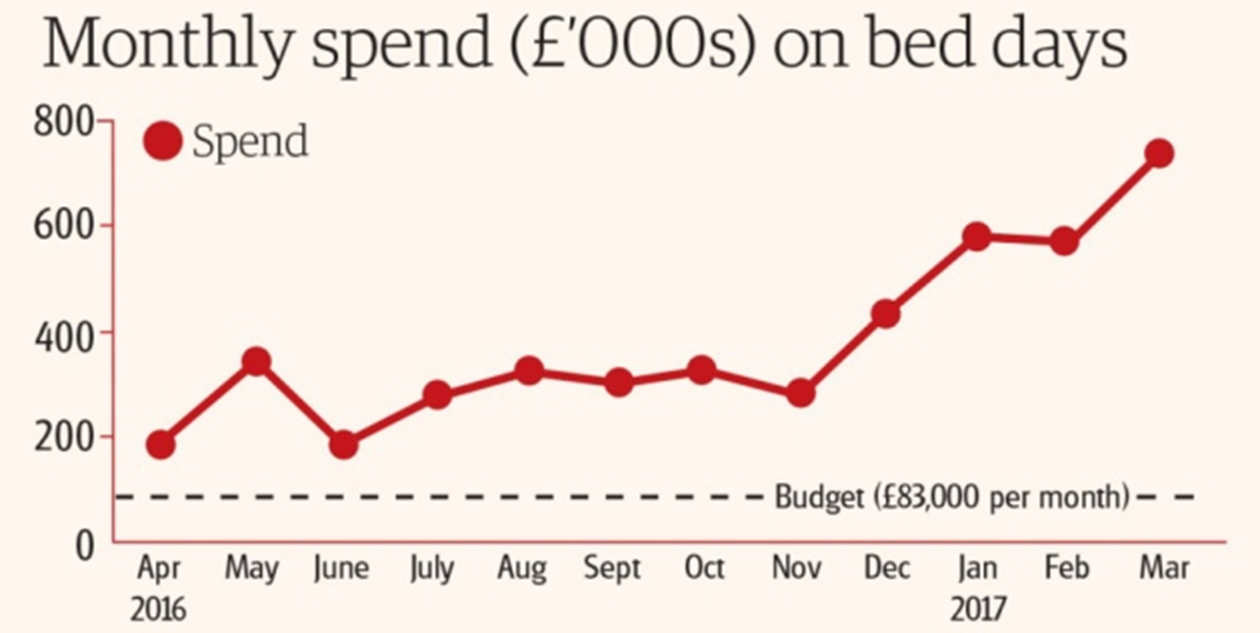