A very good piece of reporting from Adam Gretton of the EDP covering the recruitment crisis at NSFT and its desperate plans to recruit from Portugal and Ireland despite making skilled and experienced staff redundant at a cost of £7.3 million – many of whom haven’t even left yet!

A mental health trust, which has cut hundreds of jobs over the last year, is looking to launch a recruitment campaign overseas to help fill vacancies, it has emerged.

Bosses at Norfolk and Suffolk NHS Foundation Trust (NSFT) admitted that they have 505 vacancies at the organisation, which is in the midst of a major overhaul of services.

As part of a new recruitment strategy, the mental health trust is looking into the possibility of hiring new staff from Ireland and Portugal.

Campaigners last night spoke of their surprise at the move, which comes after around 400 jobs were cut as part of a radical redesign of NSFT to reduce the trust’s budget by 20%.

Carol Briggs, Unison branch Secretary, said: “We are concerned at the cost of recruiting staff externally, and question the timing when there is still no indication how many staff will be transferring back to Norfolk County Council as a result of the Section 75 agreement being revoked. Unison does not believe that management currently has a clear picture of the current or future workforce. It is concerning they are not listening to staff representatives, who often have a much clearer picture of what is happening on the front line. We would welcome dialogue with the trust about these plans,” she said.

Terry Skyrme, a member of the campaign, who works in the crisis resolution team at NSFT, said he found it “incredible” that the trust was looking to fill vacancies from abroad.

“I have no objections to foreign workers. However, if your English is not great, it is not easy to work in mental health,” he said.

• Campaigners have posted their take on the reorganisation of Norfolk and Suffolk NHS Foundation Trust with new subtitles to the movie Downfall, which depicts the final days of Adolf Hitler’s final days in a Berlin bunker.

The video on the Campaign to Save Mental Health Services in Norfolk and Suffolk has been titled “Downfall video: NSFT leadership team in the Hellesdon Hospital bunker.”

Read the full story by clicking on the image below: 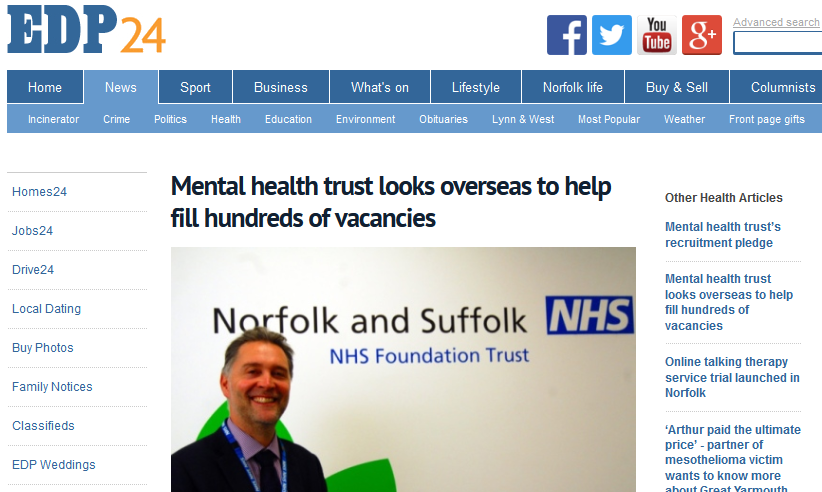