Across Europe, one person takes their own life every two hours.

And in Norfolk we have significantly higher rates of suicide than other parts of the UK.

The number of suicides in Norfolk is appalling:

The age-adjusted three-year-rolling suicide rate, as published by the Office for National Statistics (ONS), rose by a staggering 164 per cent in Broadland between 2010-12 and 2013-15.  The increase in Broadland is TWENTY-SIX TIMES the average rise of 6.3 per cent in England over the same period.

The age-adjusted three-year-rolling suicide rate, as published by the Office for National Statistics (ONS), rose by a staggering 33 per cent in Norwich between 2010-12 and 2013-15.  The increase in Norwich is FIVE TIMES the average rise of 6.3 per cent in England over the same period.

The age-adjusted three-year-rolling suicide rate, as published by the Office for National Statistics (ONS), rose by a staggering 84 per cent in Great Yarmouth between 2010-12 and 2013-15.  The increase in Great Yarmouth is THIRTEEN TIMES the average rise of 6.3 per cent in England over the same period.

The age-adjusted three-year-rolling suicide rate, as published by the Office for National Statistics (ONS), rose by a staggering 77 per cent in North Norfolk between 2010-12 and 2013-15.  The increase in North Norfolk is TWELVE TIMES the average rise of 6.3 per cent in England over the same period.

Yet, there is reason to believe the true number is not recorded, as coroners are reluctant to give a conclusion of suicide.

Through this job, I spent a good chunk of my time at inquests, listening to the circumstances surrounding people’s deaths. Many have taken their own lives. Despite this it’s very rare a death is recorded as suicide – although often it is heavily implied.

Some groups such as Papyrus suggest this is an attempt by the government to deliberately suppress the figures.

We sought a meeting with the coroner over our concerns about the increasing number of deaths as the radical redesign cuts and chaos took effect. They refused to meet us. The numbers of deaths continued to climb.

I sympathise with coroners. Families who have lost loved ones sometimes cannot accept suicide.

We’re not sure it is simply because families sometimes seek to avoid a suicide verdict. We know bereaved families who have been very unhappy with the failure of the coroner to find the cause of death as suicide.

And coroners are bound by the rules – they must satisfy high levels of proof, the criminal standard of ‘beyond reasonable doubt’. That means they not only have to be sure the person did take their own life, but that they intended for their life to end.

This results in cases like the tragic death of 20-year-old student Katrina Rolph. Katrina, from Norwich, was found hanged in woodland in Hempstead on October 2, 2016.

Area coroner Yvonne Blake ruled out suicide, saying: “Katrina took her own life while the balance of her mind was disturbed and therefore her intent was unclear.”

Does this then mean anyone with a mental illness cannot have taken their own life, because they may not have been in their right mind? There is an argument that is the nature of the beast. For some, there is an injustice in a death not being recorded accurately.

This is absolutely the case.

But this also causes problems for data. When coroners give more narrative conclusions – where they sum up a death in a couple of sentences instead of a defined conclusion – it means the Office for National Statistics struggles in terms of suicide rates.

Professor Colin Pritchard at Bournemouth University suggests if coroners used the civil standard of proof we would see a 30-50pc increase in recorded suicides.

And other academics said the reluctance to give a suicide conclusion could result in “incorrect rate estimates, misleading evaluations of national and local prevention activity, and masking of the effects of the current economic crisis on suicide.

Absolutely. The former Chief Executive of NSFT, Michael Scott, repeatedly sought to focus on the smallest number of deaths using the most narrow legal definition of suicide rather than the much larger number of unexpected deaths.

“Furthermore, because coroners vary greatly in their use of narrative conclusions, suicide rates may (falsely) seem to decline in areas served by coroners who make most use of such conclusions.”

Chief coroner Peter Thornton QC even told the Ministry of Justice he would support a change.

We’re even more concerned that coroners have ignored the impact of cuts to mental health services when deciding upon cause of death and raising concerns, or not, in Prevention of Future Deaths reports. When a failure is identified, it tends to be ‘communication failures’ or a fault attributed to individual members of staff rather than poor management or lack of staff and beds. Even senior members of the mental health trust have confided to us that they have ‘got off very lightly’ in the coroner’s court.

Here’s what the parents of Christopher Higgins felt about their experience of a Norfolk inquest:

“After Chris’ tragic death, the Trust carried out an internal investigation. It was a complete whitewash and we challenged them on it. They granted a limited further review by an ex Non-Executive Director of the Trust, although highly critical of the failings prior to Chris’s admission to the unit, the multiple disastrous failings leading to Chris’ suicide in the unit only 36 hours after admission were unbelievably deemed not to have contributed to his death: The second whitewash. These findings were accepted by the Coroner despite the wealth of contrary evidence. The Coroner’s inquest ended up being an incredibly frustrating and disappointing experience, in which the Coroner refused to allow the jury to comment on the serious failings: The third whitewash.”

This is what the solicitor of the Higgins family, Sara Lomri, of Bindmans had to say:

“I represent the families of a number of patients who died following contact with NSFT, both in the community and within the local prisons, and have done for a number of years. Over that time I have seen similar failings and mistakes repeated, despite previous assurances given to Coroners, the Prison and Probation Ombudsman or clinical reviewers that lessons have been learnt and systems put right.”

We have been deeply worried about the lack of independent investigation of mental health deaths in Norfolk for several years and our concerns are shared by others.

And in July the House of Commons health committee recommended the standard of proof for conclusions of death by suicide should be changed to the balance of probabilities rather than beyond reasonable doubt.

We have rightly stopped using the phrase ‘committed suicide’ to describe when someone takes their own life, as it is reminiscent of a criminal offence.

So why, when ruling whether someone ended their life, do we still apply the criminal standard of proof?

You can read the article in full on the EDP website by clicking on the image below: 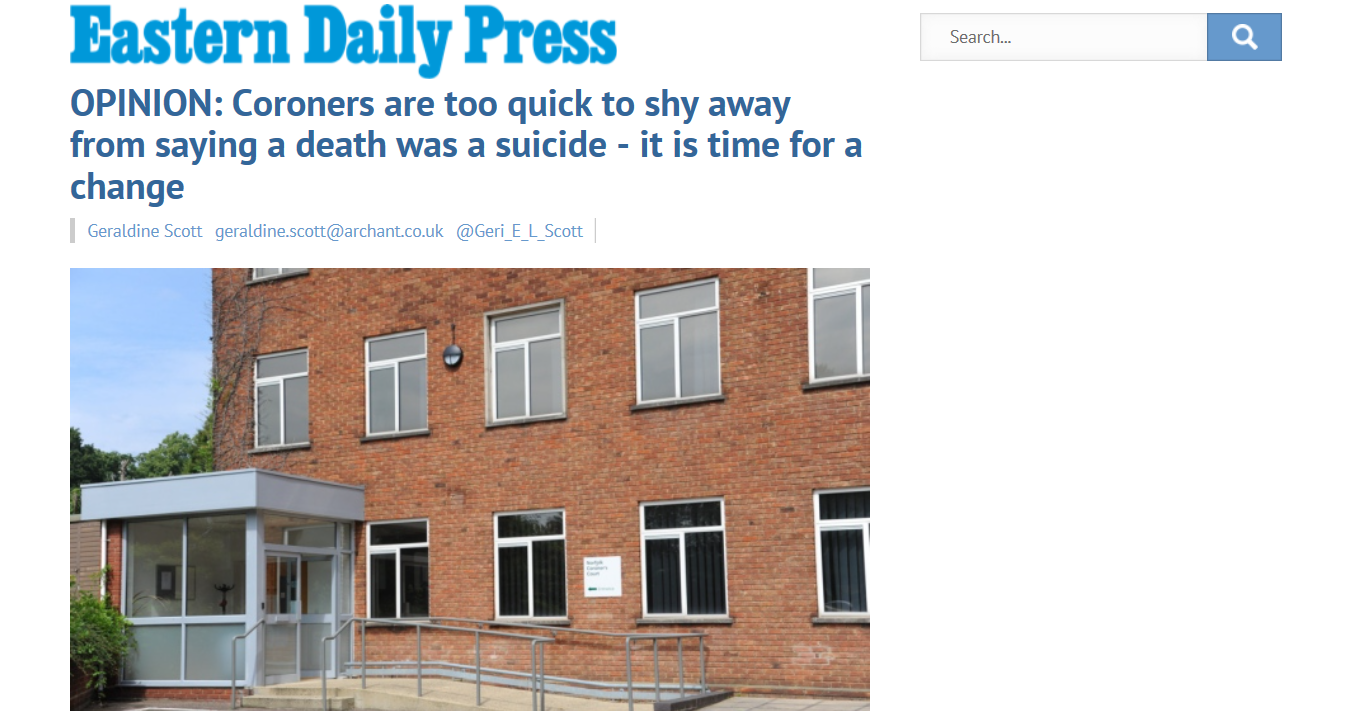 2 thoughts on “EDP: OPINION: Coroners are too quick to shy away from saying a death was a suicide – it is time for a change”

And here is the proof from the report of former Professor @warren_nsft in the @NSFTtweets Annual Report and Accounts 19-20 published last month. Transportation more than tripled in the first three months of the year. Lockdown only occurred on 23 March. pic.twitter.com/aPTzqaSpd5

Here is the first part of the main report by @nikkijfox of @BBCLookEast into the transportation of Kathleen Cantell. Kathleen must be proud of her daughter. The lies from @NSFTtweets start early. The increase in transportation to out of trust beds did not coincide with Covid-19 pic.twitter.com/7rNkyTmEFt

Yes, by having @NSFTtweets transport your loved one to a private hospital in higher risk Darlington to catch Covid-19 without informing you.

Taking a novel approach, @NSFTtweets has decided to keep Covid away from its doors by sending its elderly and vulnerable patients 240 miles away to catch it in a private hospital in Darlington. That's a lot of space between Kathleen Cantell and her family this Halloween. twitter.com/NSFTtweets/sta…