Click the image below to watch the videos about Norfolk & Suffolk NHS Foundation Trust (NSFT), including interviews with NSFT patient David Walter, NSFT social worker Terry Skyrme and NSFT nurse Emma Corlett. You will need to scroll down the page to the two video clips.

NSFT has repeatedly dismissed and ignored warnings through all available channels and ostracised those who have raised concerns which have proven to be correct. Still, NSFT does not want to acknowledge the true extent of the crisis and certainly has shown no inclination to apologise to the service users, staff and the taxpayer. Even this week, when the NSFT Chair, Mr. Page, finally decided it might be a good idea to have a doctor give a presentation to the Board, it was Julian ‘Milestones‘ Beezhold who was chosen.

Norman Lamb MP, once again, tries his trick of forgetting that he is the Government Minister responsible for mental health: Lamb pretends that he is in opposition, complaining about his own government’s lack of funding, forgetting the initiative he launched without results three years ago and ignoring his own lack of decisive action to control or remove those responsible for the incompetent and arrogant ‘radical redesign.’

You can watch the Andrew Hopkins’ interview if you can bear to listen to the usual excuses and denials. Of course, NSFT has cut a lot more than two beds and has slashed community teams across Norfolk & Suffolk as part of the ludicrous radical redesign. Kathy Chapman, the radical redesign’s architect, remains unapologetically in her job. So too does Jane Marshall-Robb, Director of Workforce and Organisation Development, responsible for the voluntary redundancy programme which wasted millions of pounds and is still putting services and lives at risk today. 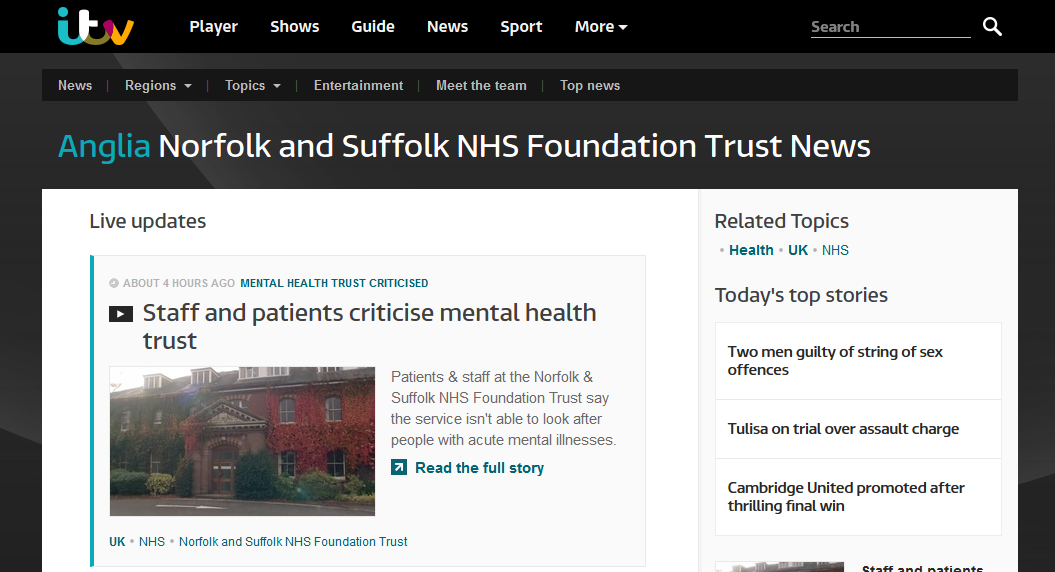