Norfolk & Suffolk NHS Foundation Trust (NSFT) proposes to reduce by a further seventeen the number of beds for older people with dementia or psychiatric conditions and another eight acute adult psychiatric beds will also go – a net loss of twenty five beds. This is an unforgivable proposal when there is already a bed crisis. While we agree that treatment at home is best, if at all possible, there are not enough beds today, community teams have been slashed to the point that some referrals are not being dealt with and demand is growing. Is NSFT really proposing that elderly patients in crisis will be sent to the other side of the country, to Somerset or Stockport, in private ambulances, hundreds of miles away from their families? We already know of one husband who has run up transport bills of £3,000 visiting his wife in Norwich when beds closed in King’s Lynn. Now, families in Great Yarmouth and Waveney will face the same costs and problems. This is the opposite of ‘care.’ Why does the public need local Clinical Commissioning Group (CCG) bureaucracies but not local beds?

The proposed cut to the budget for adult acute services in Great Yarmouth & Waveney is £3.7 million per year – which is reduction of 21.4 per cent at a time of rising demand. £2.2 million of this ‘saving’ is being diverted to the Youth Service while the remaining £1.5 million disappears from front-line services altogether, in part to cover the cost of financial mismanagement and increasing bureaucracy. The proposed cuts to Dementia and complex care in old age services are another £280,000 per year. In total, more than £1.75 million is being cut from mental health budgets in Great Yarmouth & Waveney at a time of increasing demand. The promised ‘dementia café’ and ‘Information and Resource Centre’ are not even funded – NSFT is hoping the voluntary sector will win some as yet unspecified funding and provide them. Volunteer-run cafés and information centres are often used to make changes appear more palatable – a similar ‘cuts café’ at the Julian Hospital is now closed.

When publicly-funded bodies consult the public, they have a duty to be frank and honest. Sadly, this isn’t the case here and there seems to be precious little distance between commissioner and provider. Until the EDP and this campaign exposed the truth, NSFT and the CCGs claimed the ‘radical redesign’ was not about cuts but improvements. Now, people with mental health problems are being sent across the country, left for prolonged periods in their own homes or police custody awaiting beds, with some referrals unanswered and care delayed or even denied. These are not improvements. Norfolk County Council has had enough of the NSFT Board and so have service users, carers and NSFT staff across Norfolk and Suffolk. Revisit our 12 days of Christmas cuts campaign to discover the reality of the ‘radical redesign.’ You can read about what it is like to work for NSFT here.

How do peer support workers, a recovery college and a couple of ‘dementia cafés’ replace hospital beds, skilled doctors, nurses, social workers and care coordinators? NSFT’s track record of ‘enhanced community teams’ thus far is ‘massively cut community teams.’ What use is ‘information, advice and support’ without services? Frankly, we can’t trust a word the NSFT Board says. Until NSFT proves that it has surplus capacity with properly resourced community teams which are succeeding in keeping people out of hospital, these proposals cannot be allowed to go ahead. We challenge NSFT to publish the bed occupancy rates at both Carlton Court and Northgate House and the number of patients who have have been admitted to beds outside of Yarmouth and Waveney over the past two years. Do these proposals take into account increasing demand and the aging population? Without these facts, the public cannot properly judge the proposals.

On the 25th November 2013, less than ten weeks ago, Gary Page, NSFT Chair, and Andrew Hopkins, Acting Chief Executive, issued a widely circulated letter attacking this campaign’s public letter in which we said that NSFT ‘is closing or reducing in-patient units, with Meadowlands secure unit the next to close and either Northgate or Carlton Court acute units next in line.’ Page and Hopkins wrote: ‘Carlton Court and Northgate Hospital will not be closed.’ That was not true, as the Operation Director’s report to the NSFT Board meeting in December 2013 and this consultation makes clear. Our response to the NSFT letter is available here. This isn’t just a Great Yarmouth and Waveney issue either – 27.7 per cent of the users of Great Yarmouth & Waveney beds came from the rest of Norfolk & Suffolk. Where will these service users go if these proposed bed cuts are implemented? NSFT is already sending people in crisis all over the country, frequently to expensive private hospitals.

“Making these cuts at Carlton Court is vandalism. It is a brand new state of the art facility that is no more than six years old. It is an appalling waste of resources and if they want the public to help improve services, the best thing they can do is rip up the plans.”

Bob Blizzard is absolutely right. What do local MPs, Peter Aldous and Brandon Lewis, think about these proposals and the worsening mental healthcare crisis? Thus far, their silence is deafening. Do they not take seriously their responsibility to represent some of their most vulnerable constituents?

The consultation document can be downloaded here.

The consultation survey can be completed online here. Will the CCG take any notice? We can but try and hope.

If you must read what the Norfolk director of operations at NSFT has to say or to would like to read the rest of the EDP article, click the image. Comments are open below. Let us know what you think. 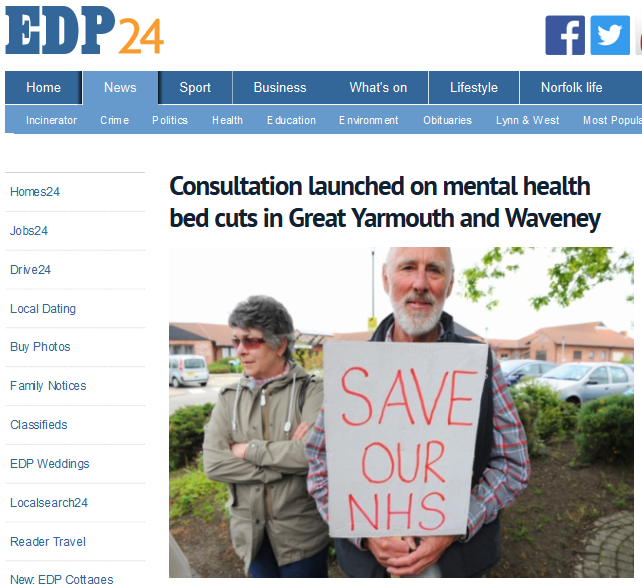