Michael Scott, who took over as boss of Norfolk and Suffolk NHS Foundation Trust (NSFT) earlier this year, said his organisation was already around £1m in deficit for the current financial year and the way mental health services were funded could not carry on.

It is great news that Norfolk & Suffolk NHS Foundation Trust (NSFT) has decided to stop talking about ‘improvements’ and ‘enhancements’ whilst implementing massive cuts. We’ve been predicting an inevitable financial crisis for months: it was obvious from the financial report presented by the NSFT Finance Director Andrew Hopkins at the Board of Directors meeting in Swaffham that NSFT’s spending on out of area beds and temporary staff was unsustainable. No wonder Michael Scott, Chief Executive of NSFT says: “It can not go on.”

NSFT’s hubristic ‘radical redesign’ involved making skilled and experienced staff redundant, cutting entire evidence-based services such as Early Intervention and Assertive Outreach, closing beds, slashing community teams and spending £4 million per year on Access and Assessment Teams which deliver neither diagnose nor treatment – only delays. CAMHS and dementia services have also been viciously cut. The radical redesign destroyed staff morale.  The ‘radical redesign’ has been shown to be a total and utter failure because the only way to keep services safe and fulfil statutory obligations post radical redesign has been to spend so much money on private beds and temporary staff that it has bankrupted the trust.

It is obvious that the NSFT Board is culpable but so too are the Department of Health, NHS England, Monitor, the Clinical Commissioning Groups (CCGs) and the local MPs that have failed to act to stop this on-going crisis. It isn’t as though they weren’t warned repeatedly. Some of the most vulnerable people in society cannot be allowed to pay the price of the arrogance and mistakes of the bureaucrats and politicians. NSFT must be bailed out. Mental health services in Norfolk and Suffolk are already in crisis: it is simply impossible to cut them further.

NSFT, Norman Lamb, NHS England and the CCGs need to stop blaming each other. Local MP Norman Lamb is the Minister of State at the Department of Health directly responsible for mental health.  Norman Lamb talks about parity of esteem but has instead overseen real-terms cuts to mental health funding. Norman Lamb claims to be powerless when his government designed the new system of NHS England and the CCGs. Lamb needs to act decisively to ensure that his own local mental health trust does not collapse and that mental health services are fit for purpose in both his own constituency and throughout Norfolk and Suffolk. Words and empty promises, taskforces and concordats are no longer enough. Money needs to do the talking now, Mr. Lamb.

Click on the image below to read the full story in the EDP: 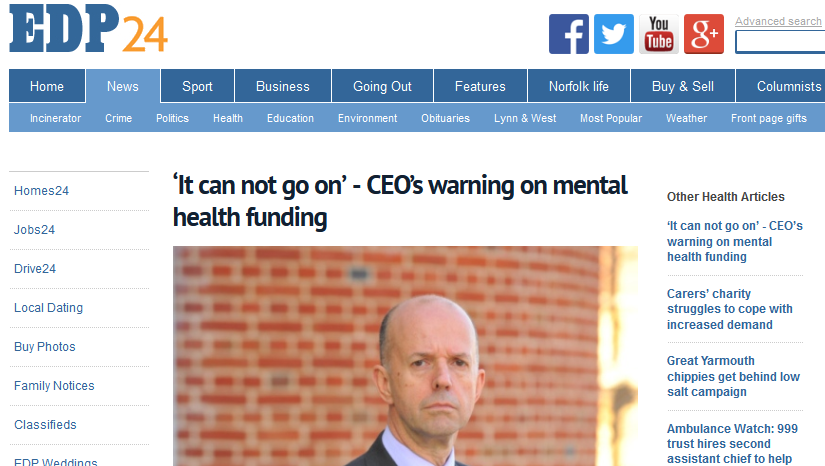 6 thoughts on “Financial crisis: EDP ‘It can not go on’ – CEO’s warning on mental health funding”