One of our key recommendations for ending the crisis in mental health services at Norfolk & Suffolk NHS Foundation Trust (NSFT) is the restoration of decent mental health services for the most vulnerable. The specialist assertive outreach teams which national guidance and evidence recommends have not just been cut but rather completely closed, leaving those previously cared for abandoned to neglect and deterioration.

Our campaign challenged the NSFT Director of Nursing and Governance, Jane Sayer, at the most recent public NSFT Board meeting in Swaffham, to properly audit the outcomes of former patients of the Assertive Outreach team subsequent to the team’s closure. Many members of the campaign are aware of appalling outcomes for people who were previously kept safe by specialist teams, resulting in worsening physical and mental health, neglect, emergency admissions to hospital for physical and mental problems, self-harm, harm to others, entry into the criminal justice system and, worst of all, inquests such as the one covered by the EDP below.

NSFT can find the money for its pet projects, such as trebling spending on lobbyists and spin-doctors or finding £4 million per year for the failing Access & Assessment services which deliver neither diagnosis nor treatment, but it is frequently at the expense of evidence-based treatment for the most severely unwell and in breach of NSFT’s statutory obligations.

NSFT executives and managers often dismiss those in greatest need, by misusing the language of ImROC, as being ‘dependent’ or being part of a ‘dependency culture’ or complaining ‘they’ require a ‘disproportionate’ share of resources, as NSFT Operations Director, Kathy Chapman, claimed about in-patient admissions at the HealthEast consultations. Nothing stigmatises those with mental health issues more than calling them dependent and denying them the help they need from the NHS. The bitterest of ironies is that Kathy Chapman, who closed the Assertive Outreach teams as part of her failing and catastrophic radical redesign, is now being promoted to work for Geraldine Strathdee, the NHS England Clinical Director, who recommends that specialist services should not be closed.

Luther Benjamin Hughes was cared for by the Assertive Outreach team. Until NSFT closed it. 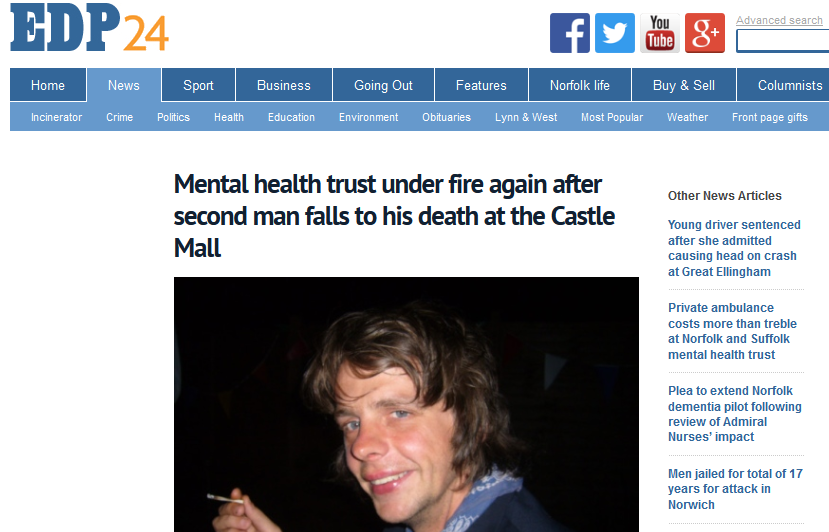 One thought on “EDP: Mental health trust under fire again after second man falls to his death at the Castle Mall”