An NHS trust caring for mentally ill people in Norfolk and Suffolk is to carry out an independent review of unexplained deaths.

Norfolk and Suffolk NHS Foundation Trust (NSFT) has appointed Verita to examine how the deaths are dealt with.

Campaigners have welcomed the step and the first phase report is expected by the end of May.

However, we’re a bit concerned about this part of the article:

The numbers of unexpected deaths will be compared with national rates to establish their significance.

There is a wide variation in demographics, reporting and the provision of services by mental health trusts. What worries us most about NSFT?

It is best practice that, given the variations between trusts, individual trusts should concentrate on their own performance. NSFT has failed to do this.

The Chief Executive of NSFT, Michael Scott, tells the BBC:

“Our trust is a high reporter of unexpected deaths and serious incidents, but we are also a trust which demonstrates low levels of harm to our patients,” Mr Scott said.

The final two key messages of the recent report Healthy services and safer patients: links between patient suicide and features of mental health care providers by the National Confidential Inquiry into Suicide and Homicide are:

4. Services are often unsure whether to attach significance to a rise in suicide in a single year. An accompanying rise in safety incidents overall should raise concerns.

5. Higher rates of complaints and safety incidents are sometimes taken as evidence of an open reporting culture; our findings suggest they may also reflect real safety concerns.

Michael Scott does the opposite of the recommendations. NSFT has seen year on year increases in both safety incidents and unexpected deaths since its establishment: 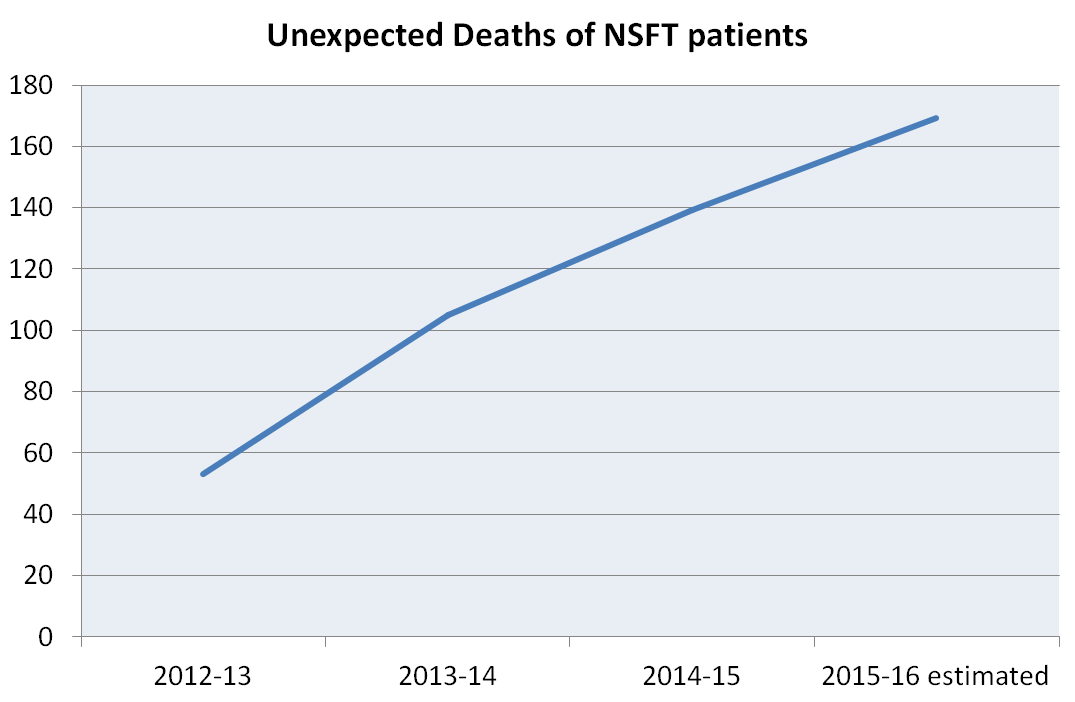 How is NSFT a trust which ‘demonstrates low levels of harm to our patients’ when it had the highest number of unexpected deaths in England in the first six months of the financial year?

Michael Scott seeks solace in being ‘a high reporter’ when there were seventeen unexpected deaths in July 2015 alone. These aren’t ‘reports’, they are deaths.

We asked NSFT to publish its data back in September 2015 and it refused. We were forced to rely on an artist’s impression. We were told we were being irresponsible for even raising the issue.

When we asked about patient deaths at the NSFT Board meeting at Swaffham back in June 2014, one non-executive director, Brian Parrott, demanded that the issue was struck from the minutes.

Verita, who were involved in the Jimmy Savile NHS abuse inquiry, will be supported by independent reviewer Colin Vose, who has worked on suicide investigation for a variety of organisations.

Let’s hope they do a thorough job.

Our campaign was founded over fears of increasing and unnecessary deaths.

Anne Humphrys, from the Campaign to Save Mental Health Services in Norfolk & Suffolk, said the review was “fantastic news”.

“We’ve been calling for this investigation for more than two years when we became concerned about the rise in unexpected deaths,” she said.

Read the story in full on the BBC News website by clicking on the image below: