Matthew Weaver of The Guardian reports:

The health secretary, Matt Hancock, is facing mounting calls to intervene in England’s worst performing mental health trust after it was rated inadequate for a third time.

The Care Quality Commission (CQC) found “significant concerns” when it inspected Norfolk and Suffolk NHS foundation trust in September including patients harming themselves and taking overdoses while waiting to be seen.

It first raised the alarm about problems at the trust in 2014 and again in July 2017. Its latest report said it was “very disappointed” to find these concerns had still not been fully addressed when inspectors visited in September. It warned that high numbers of patient referrals, which had classed as emergencies, had been downgraded by staff to routine.

The CQC recommended that NHS Improvement support the trust to make the “immediate changes necessary to keep patients safe”.

Changes will not be effective with the current leadership.

The trust remains in special measures but patient groups, local MPs and the mental health charity Mind have all called for government intervention.

Families of patients are due to protest on Wednesday morning outside one of the trust’s hospitals in Norwich to demand improvement and a clearout of the trust’s management team.

Gary Page, the chair of the trust, stepped down last week, saying it was in the organisation’s best interests for him to leave before the end of his term in 2019.

Wednesday’s report found the trust was understaffed, some wards were found to be unsafe, and there were instances of people with “significant needs” being denied a service.

The former heath minister Norman Lamb, the Liberal Democrat MP for North Norfolk, and the former Labour frontbencher Clive Lewis, the MP for Norwich South, are calling for intervention by the government.

Lewis told the BBC it was not enough for the trust managers to “mouth platitudes” about improvements. “This has become a national disgrace. We are looking at a national and local system-wide failure of governance, commissioning, regulation and inspection,” he said.

The co-chair of Suffolk Parent Carer Network, Anne Humphrys, whose daughter has been treated by the trust since 2013, said she had no faith that the service would improve.

Speaking to BBC Radio 4’s Today programme, she said: “I think we have reached a pivotal stage now. It is obvious that the mental health services are not capable of improving. It is not going to happen in a few weeks and I believe now we need to look at alternatives. I also think we need to be pressing for the intervention of the secretary of state and special administration.”

Thank you to The Guardian for finally covering the scandal at NSFT. 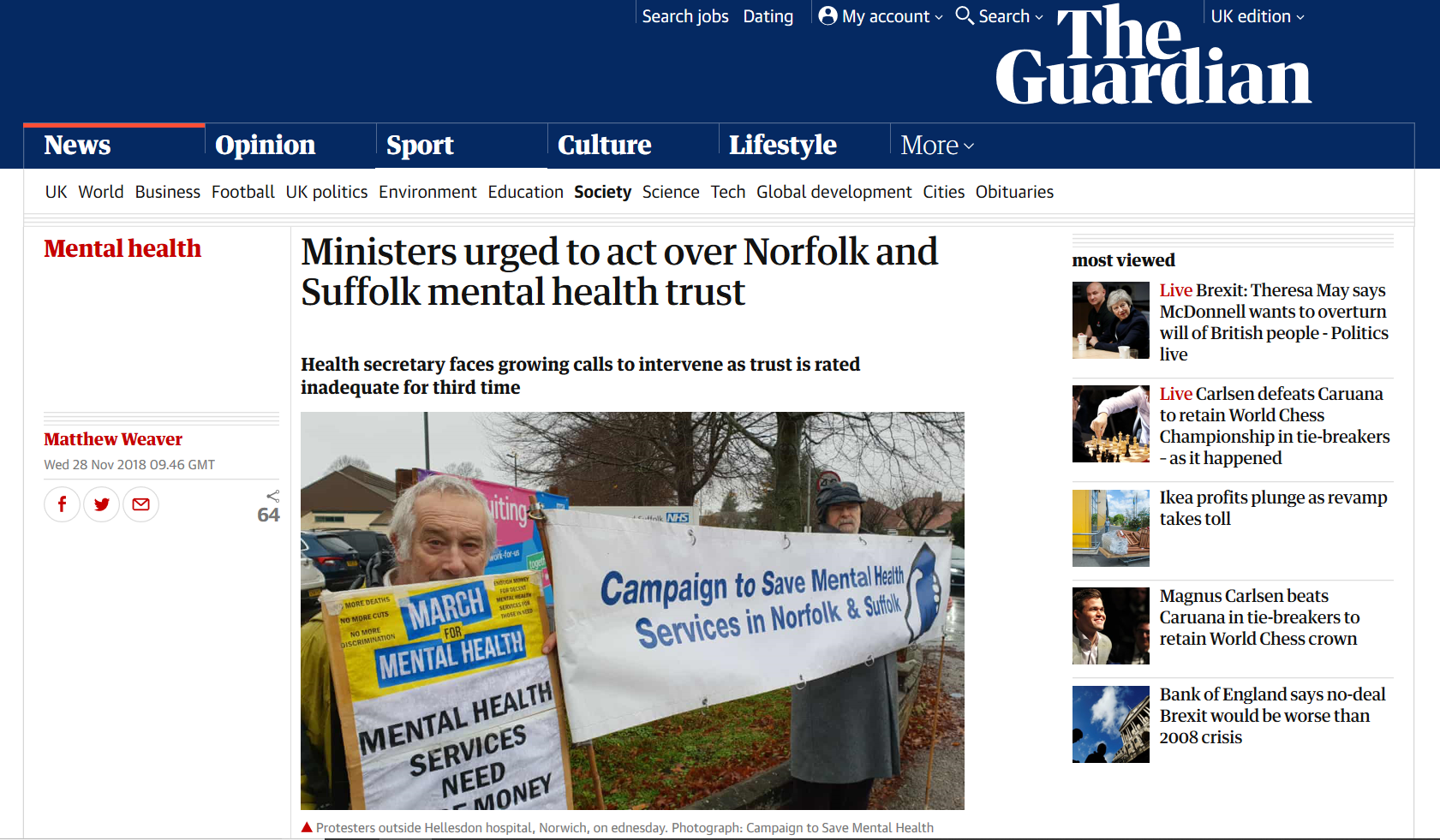 One thought on “The Guardian: Ministers urged to act over Norfolk and Suffolk mental health trust”