In a major new piece of investigative journalism, David Powles of Archant reports:

Huge increases in the number of children in Suffolk suffering from mental health problems were today laid bare – amid major concerns about the quality of services youngsters receive.

Today, concerns were raised that help and support for children in Suffolk is severely lacking in quality. Issues highlighted include:

Anne Humphrys, of Debenham, jointly set up the Suffolk support group Parents and Carers Together, after enduring problems accessing suitable treatment for her 17-year-old daughter Bethan.

She said: “There are just not the staff to support people with complex behaviour problems. The trust agreed to provide CAT (Cognitive Analytic Therapy) but had no therapists to do it. There was one in the coastal area but that was seen as out of patch.

“Bethan has also been on the waiting list for CBT (Cognitive Behavioural Therapy) since June and there’s still four people in front of her.”

The NSFT, currently in special measures, is tasked with providing mental health care across Norfolk and Suffolk, but is commissioned and receives funding from the Clinical Commissioning Groups in the two counties.

The 42-year-old claimed this has led to a ‘postcode lottery’ and it was generally perceived children in Norfolk and Waveney received a better service, adding: “In Norfolk and Waveney they are one team and if the expertise is needed in one particular area, it goes there. In Suffolk they work in silos and the treatment depends on where you live.

“There’s no child expertise out-of-hours. We’ve called for emergency support and been told to go to A&E. No child wants that.”

The trust has seen its funding overall slashed in recent years and is likely to face further cuts, but has had to cope with rises in adult patients as well.

Bec Jasper, 42, also from Debenham, has had to access services for her son, aged 13, and jointly set up the support group.

She warned some of the problems were leading parents to make potentially dangerous choices, adding: “At times, getting accepted by the service is a bit like finding a needle in a haystack. We have heard of parents giving their children their own anti-depressants as a stop gap. They just want to do what they can.”

Generally a psychiatrist will prescribe medication for children, based on a referral from a psychologist. Mrs Jasper claimed there were shortages of both and said: “My son has been given support, but just for half an hour a week. When when I asked her how many of them there were in Suffolk, she said she was the only one.

“The system is so slow, it’s heartbreaking. I put a message on Facebook and straight away I got so many replies from people going through the same.”

Alison Armstrong, Director of Operations (Suffolk) at Norfolk and Suffolk NHS foundation Trust didn’t provide proper answers to these questions from the EADT:

Q: Have there been any cases this year of children either being placed on adult mental health wards or sent outside of Suffolk for treatment? If so, what is being done to prevent this?

A: “Between January 2014 and June 2015 there were 13 instances when young people aged over 16 years-old needed an admission on to adult wards in Suffolk.

“Out of area placements: At the moment we are waiting for confirmation of activity data and will need to come back on this issue.”

Q: Is there a waiting list for children to see a cognitive behavioural therapist? If so why and how long?

Q: We’ve also heard concerns about a waiting list for children under 14 to see a psychiatrist and that this has caused some parents to self-medicate. Is this the case and if so why?

What does ‘confirmation of activity data mean’?

Dr Jon Wilson, a consultant psychiatrist and NSFT’s clinical lead for youth service, said the trust has begun a major redesign of the services aimed to provide earlier intervention. This has already been rolled out in Norfolk and Waveney, but he could not say when the rest of Suffolk would benefit.

Did somebody say ‘redesign‘?

It is typical of NSFT to use an adult psychotherapist who ‘works’ in Norwich to defend the poor provision of services for children and adolescents in Suffolk.

We will be examining whether Early Intervention services have been genuinely rolled out beyond Norwich soon. Perhaps rural Norfolk and Suffolk are inconveniently too far away from the private Newmarket House Clinic and the University of East Anglia campus?

Click on the image below to read David Powles’ excellent article in full on the EADT website: 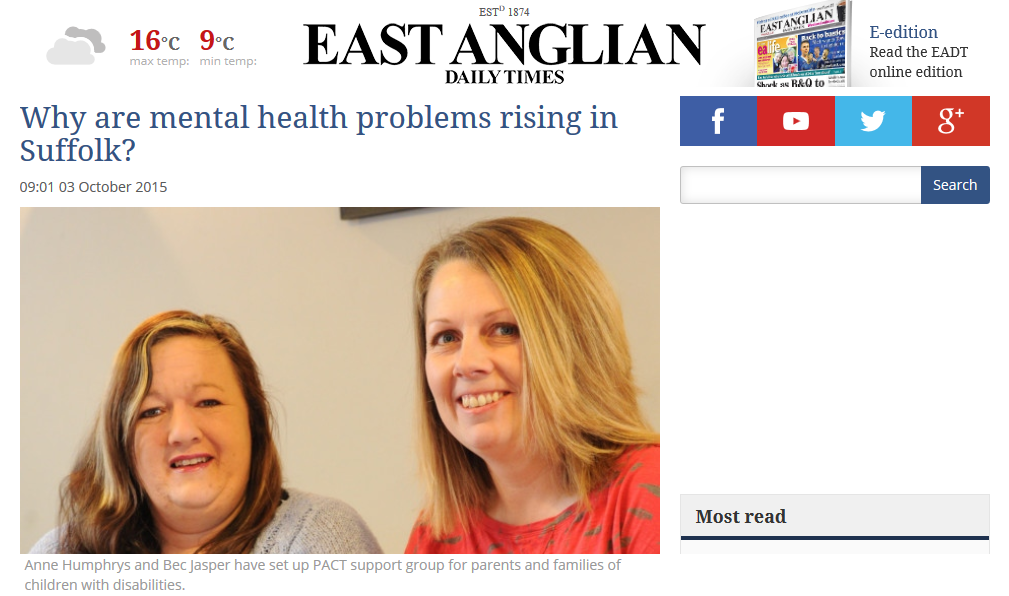