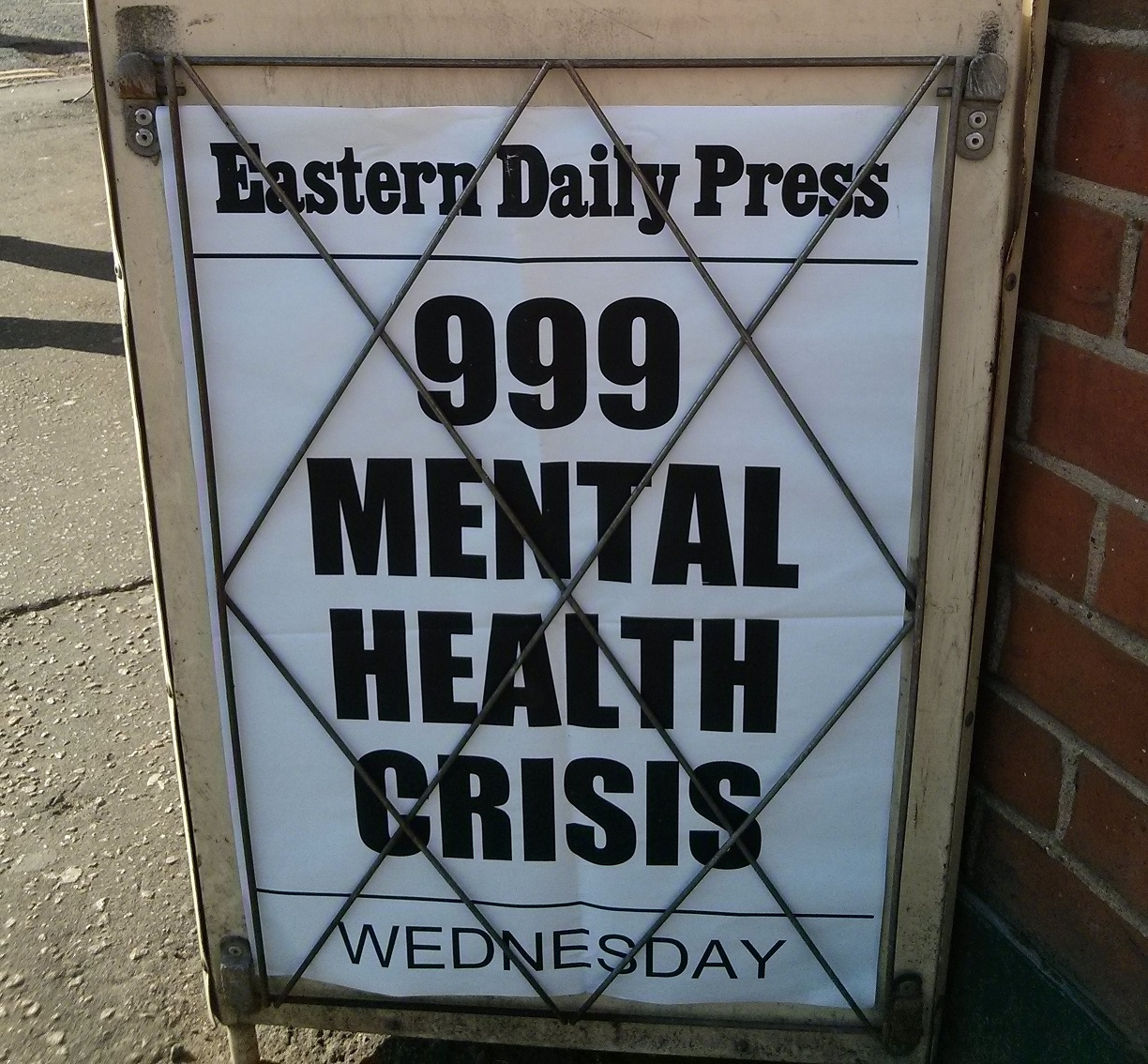 Today’s EDP reports on how Norfolk mental health patients have had to endure up to eight hour waits for ambulances. What this reported eight hours doesn’t include is the time waiting from an assessment by overburdened crisis teams or the often even longer waits while attempts are made to find an out-of-area bed in a private hospital and then the additional wait for a private ambulance to arrive, often from Essex, and the long journey to Stockport, Somerset or some far away Priory-group hospital.

police cells were used as a “place of safety” for people having a mental health crisis almost 40 times – a situation which should only happen in “exceptional circumstances”.

That’s nearly once a week.

But we know that people in acute distress are not only being detained in police cells but also in their own homes for many hours, frequently with the police refusing to take the person in distress into custody and threatening to leave, until a distant, private and expensive hospital bed can be found. The legal forms completing the section cannot be signed until a named hospital is found. How is this legal or a satisfactory way to run a mental health service?

At yesterday’s meeting of Norfolk County Council’s community services overview and scrutiny panel, Bert Bremner, Labour councillor for University ward, said it was “quite amazing” people sectioned under the Mental Health Act had been forced to wait, along with mental health practitioners and police, for up to eight hours for an ambulance to take them to a “place of safety”.

The lack of specialist beds for people with mental health problems also came in for criticism, with patients having to be taken out of Norfolk to get care.

Clive Rennie, from NHS Norfolk, told councillors that a national shortage of beds meant health staff found themselves having to ringing around counterparts in the rest of the country to find suitable beds.

He said: “People are being conveyed long distances to certain provision. They are monitored very closely and we try to bring them back to Norfolk as quickly as possible. It’s not conducive to anyone that people go to distant places.”

Kathy Chapman, director of operations at Norfolk and Suffolk NHS Foundation Trust, said, as of yesterday there were 19 ‘out-of-trust’ placements.

Still, Mr. Page claims there is no crisis and Kathy Chapman gives her usual unconvincing excuses, despite the fact that we are now one week away from the deadline of the end of April 2014, by which time the central Norfolk commissioners and NSFT promised there would be no more out of area placements. They have had four months to sort this out. Last year, NSFT spent about £2.4 million more than it had in its budget on out-of-area beds. Where is the money going to come from to fund this overspend?

NSFT may have eventually acknowledged one or two of its mistakes in the most mealy-mouthed manner possible, after five long months of pressure from this campaign, but the only lesson learned is that the NSFT directors responsible for the radical redesign, which has directly led to this disgraceful state of affairs, will refuse to take responsibility and continue to attempt to cling onto their jobs without shame.

Read the full story in the EDP by clicking on the image above. You can discuss this story in the comments section below or in our forums.

Details of upcoming meetings with Zoe Billingham and Clive Lewis/ regional MPs. Plus template letter for MPs on our website. Please email us if you wish to attend either meeting or give us information to share on your behalf norfolksuffolkcrisis@gmail.com rfolksuffolkmentalhealthcrisi…