As yet another damning report about Norfolk and Suffolk NHS Foundation Trust (NSFT) is released, we need to take a look at why local mental health services are in such a mess.

A perfect storm of cuts, incompetence and stigma has seen services unravel, with people struggling to access services, being discharged too soon, and staff under intolerable pressure with unmanageable caseloads.

Following a savage real-terms budget cut, the number of doctors has been reduced by 51 (around 25pc) and the number of nurses by 163 (1 in 8) compared to when the trust was formed in 2012, while referrals have rocketed.

The number of patients referred but still awaiting their first contact is 2,732 (as of October 12).

That’s a lot of people in distress, without support.

That’s a lot of worried families.

The way that NHS money is allocated is discriminatory, and disadvantages mental health services.

The mental health trust is given a sum of money each year, and has to provide all of its services within that budget, irrespective of how many referrals are received.

Compare this to acute physical health hospitals, where money follows the patient, so if referrals increase, so does the money the hospitals have to meet that demand.

What is more stigmatising than not funding mental health services fairly?

But cuts are not the only cause of the problems in Norfolk and Suffolk.

They may have kicked off this sorry sequence of events, but a chain of disastrous decisions made by an incompetent board, who failed to listen to service users and their own staff, made things even worse.

Ill-thought-out reorganisation of services removed care and support from those in greatest need and left services weakest where they needed to be strongest.

It became harder – not easier – to access mental health care.

Experienced staff were made redundant, only for millions of pounds a month to be spent on temporary agency staff to try and plug the gaps that never should have been created.

It’s an absolute failure of corporate governance not just within NSFT, but of the whole system.

Commissioners have failed to fund services properly, but also to take any meaningful action when quality and safety issues were staring them in the face.

It’s a failure of regulation. This is the third CQC inspection that has rated NSFT inadequate, unsafe and poorly led.

An improvement director appointed by NHS Improvement has led to no improvement. It’s a failure of our MPs, specifically those elected pre-2015.

Trade Union UNISON wrote to every Norfolk MP in January 2013 warning of a lack of beds and safety concerns.

They were ignored. Stigma again? I doubt they’d have remained so silent if similar concerns were being raised about A&E, cancer or stroke services.

Patients and staff had high hopes that special measures the first time round would bring improvement and extra resources. That couldn’t be further from the reality.

Pressure was just piled on already creaking wards and community teams, irrelevant and insignificant things were micro-managed, and the big and glaring issues not tackled.

“Fiddling while Rome burns” is the expression I’ve heard from many staff. Senior people seem to have lost all sight of what excellent care and easy to access services look like.

The cost of the failure to listen to people who are trying to access services, their families and staff is immense.

Deaths have continued to rise, harm has continued to be caused, families are in despair and distress and the staff’s own mental health is suffering.

The absolute disregard for bereaved families is shameful, with NSFT trotting out similarly worded letters now as in 2014, with empty promises that “lessons will be learned”.

The biggest disgrace is that people were warned, and failed to act.

“Speak the truth to power”, they said.

We went to managers, the CQC, MPs, government ministers.

No one saw what was staring them in the face.

They all wrote to each other, arranged meetings, while the people they are meant to protect continued to be failed.

The County Council’s Health Scrutiny Committee (of which I am a member) and Healthwatch repeatedly raised concerns and made recommendations, but proved toothless in the face of a Kafkaesque system.

We must use our collective voice to demand better.

People who use, or who are trying to use, services and frontline staff should be put at the centre of improving things.

If their warnings had been heeded in the first place, this whole sorry mess could have been avoided.

There has been no accountability at NSFT when two previous chief executives and now the chair of the organisation have walked away ahead of a critical report – and how cowardly that is!

People in need of care can’t escape their own distress.

The families of those loved ones who need the trust to help them do not have that luxury either.

They cannot simply walk away.

Read the article in full, along with the CQC report and a timeline, on the EDP website by clicking on the image below: 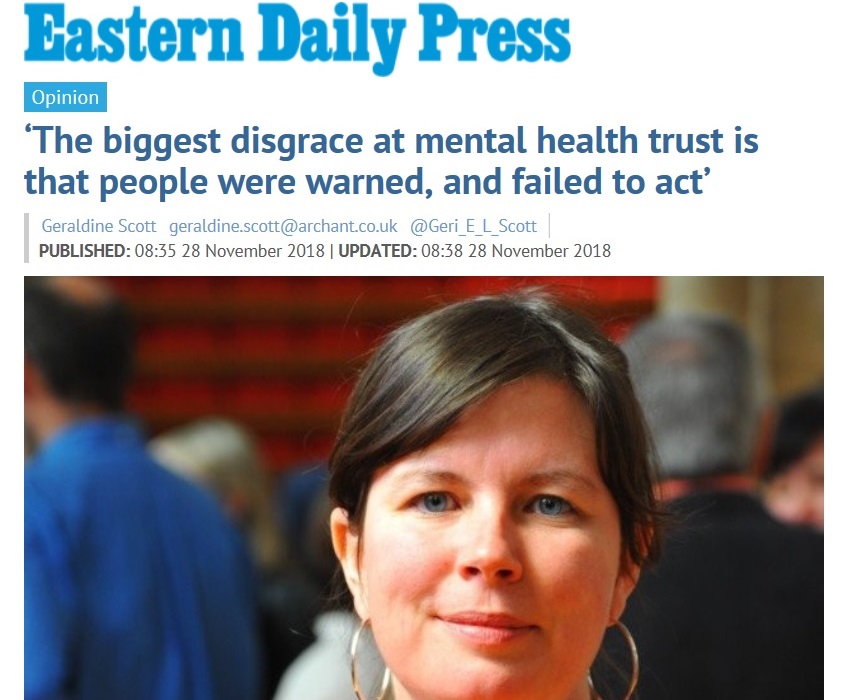 2 thoughts on “EDP: Opinion: ‘The biggest disgrace at mental health trust is that people were warned, and failed to act’”