Alice Hutton of The Observer reports:

The family of a former footballer who died in a struggling dementia hospital will have to represent themselves at his inquest this week after being denied legal aid.

We have serious and longstanding concerns about the operation of the Coroner and inquests in Norfolk.

How can deaths be properly investigated and justice be done without independent investigations and legal representation?

Frank Lockey, 84, who was on Liverpool’s books in the 1950s, was found dead in his chair at Norwich’s Julian Hospital in August last year. The grandfather from Dereham, Norfolk, had been admitted six months earlier suffering from Alzheimer’s and Parkinson’s disease.

His family claim he was neglected by staff at the NHS mental health facility and suffered more than a dozen unexplained injuries, lost nearly three stone in weight, and was often found sitting in the dark in soiled clothes that were not his own, or in a medicated “zombie state”.

Videos and photographs taken by the family, which are due to be shown at the coroner’s court on Monday, appear to show cuts and deep bruises on his body. In one video he says: “Help me.”

Gary Page, the chairman of Norfolk and Suffolk NHS Foundation Trust, stepped down last week, saying it was in the organisation’s best interests for him to leave before the end of his term in 2019.

No coverage in the Guardian at the time.

The trust was rated inadequate by the Care Quality Commission (CQC) in October last year, two months after Mr Lockey’s death, and placed in special measures. It had been taken out of special measures in 2016.

Such a shame that the Guardian/Observer has to link to the CQC report rather than its own non-existent coverage.

While the Guardian has provided endless puff pieces for its favoured former mental health minister, Norman Lamb, it has virtually ignored the mental health scandal in his own constituency.

In 2016 the trust was also fined £366,000 for health and safety failings after dementia patient Joan Darnell, 78, drowned in a bath at the same hospital.

Also ignored by the Guardian.

NSFT spent a fortune on lawyers appealing the fine when the judge had already reduced it to below the usual level given its final difficulties. NSFT lost the expensive appeal. The money should have been spent on patient care.

On Monday, Mr Lockey’s daughter, Tina Lockey, 54, will have to question NHS doctors and police officers herself at Norwich coroner’s court after being turned down for legal aid. She said that the family felt “abandoned to fight for the truth ourselves”.

Ms Lockey, who was her father’s full-time carer along with her mother, Margaret, before he went into hospital, said: “My father was living in a threatening, hostile, neglectful, uncaring and fearful environment. We asked over and over again where the injuries had come from and no one would tell us.

An investigation by the trust in May last year concluded that there were no hospital records of Mr Lockey’s alleged injuries. But a surprise inspection of Julian Hospital by the CQC in the same month, carried out after “concerns raised by a member of the public”, found that some care records contained incorrect medical details and that staff did not always include safety information about recent patient falls.

The Norfolk Safeguarding Adults Board confirmed that a referral was made in September last year for a review into Mr Lockey’s death, but that after consideration it “did not meet the criteria” where an adult had died or suffered from abuse or neglect.

A spokeswoman for Inquest, a charity that helps families investigate state related deaths, said it was unacceptable the family had not been given legal aid. “Inquests provide an opportunity for families to ask questions and establish the truth,” she said. “Unrepresented families face a huge disadvantage given that state bodies and private providers are almost always legally represented.”

NSFT is often represented by an expensive QC.

The taxpayer pays for representation for the NHS but not the taxpayer themselves.

Clinicians at NSFT have sometimes been asked to ‘edit’ their statements.

Norfolk and Suffolk NHS Foundation Trust did not respond to requests for comment.

So, despite employing its new Director of Corporate Affairs and Communications, Rebecca Driver, on a no-doubt six-figure salary, in addition to the existing doubled-in-size Comms team and its Head of Communications and Marketing, NSFT is incapable of responding to the questions from a national newspaper about the death of one of its patients. 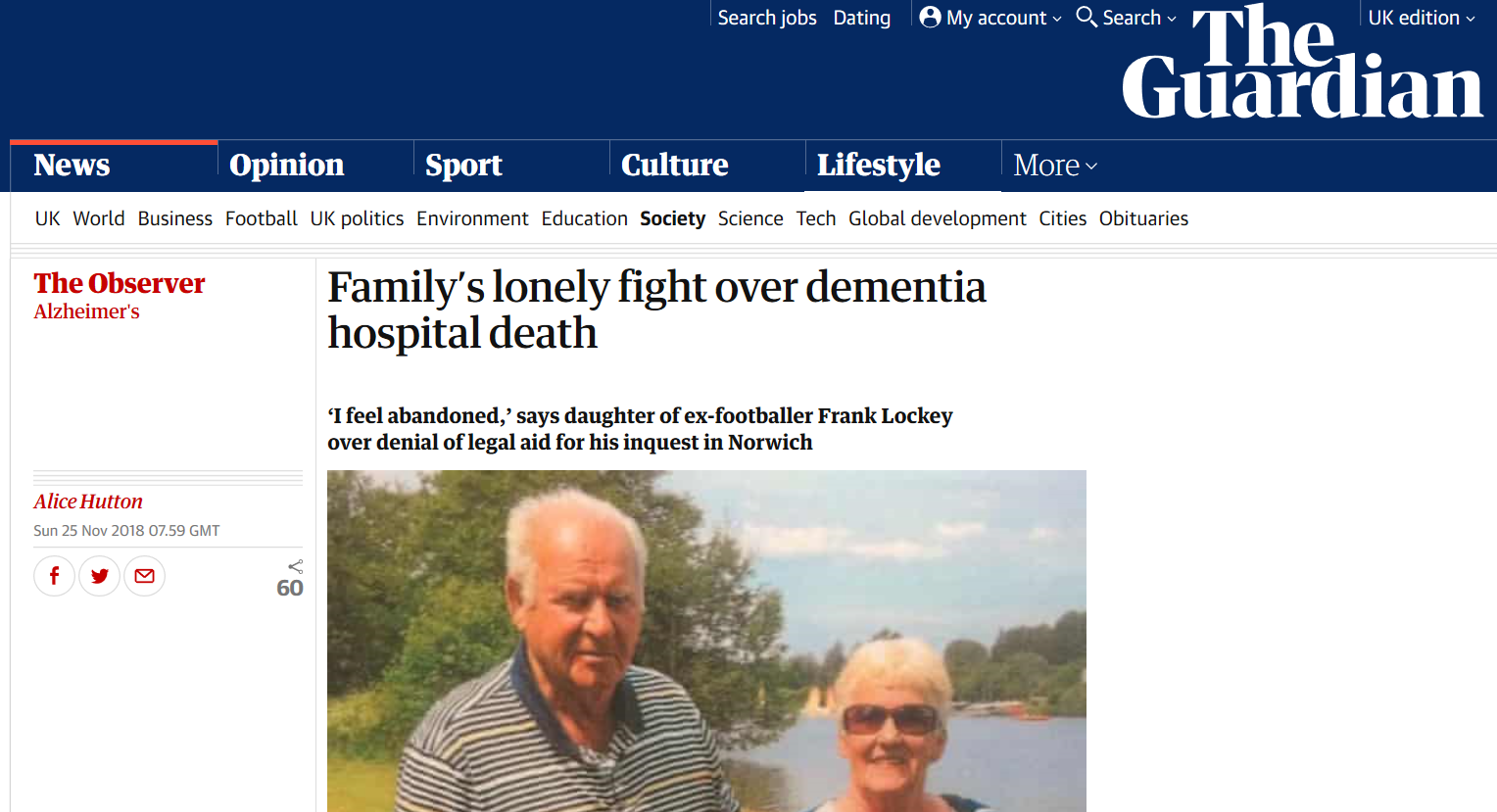