When Linda Jones received a call from her distraught husband, one cold day in December 2008, to say that their beloved 17-year-old son, Matthew, had committed suicide in his bedroom, she was inconsolable, as any mother would be. But she was not surprised.

The despair the Joneses feel at the state of Britain’s mental-health services is becoming ever more prevalent. Only last week, we heard the harrowing story of Kim Lindfield, a 27-year-old charity worker, who committed suicide on a ward at Wythenshawe Hospital, Manchester, after a catalogue of missed opportunities in her care.

It was also reported that the health service ombudsman found that Stephen Foster, 48, a Norfolk author who committed suicide days after being discharged from hospital, had been “let down” by the two NHS trusts. Trezza Azzopardi, his partner, the Booker-shortlisted novelist, described the hospital trust’s behaviour as “arrogant, dismissive and shambolic”.

The statistics make equally disquieting reading. According to recent research by the Mental Health Policy Group, mental illness accounts for 23 per cent of the total impact of ill health but only gets 13 per cent of the NHS budget. The number of beds for mental-health patients has fallen by 8 per cent since 2011, according to a Care Quality Commission report, and last year, 236 young people with mental-health problems were placed in police cells because of a shortage of beds.

“The psychiatric system is in meltdown due to the long-term relentless agenda to close psychiatric beds to save costs and treat everyone, however severely disturbed or in crisis, under the care of already overstretched and demoralised community home- treatment teams,” says Marjorie Wallace, chief executive of the mental health charity Sane. “It is no coincidence that the suicide rate has more than doubled for patients being treated by these teams in the last few years. At Sane, we witness daily the impact of the failures of the psychiatric services on patients, families and front-line mental-health professionals. In many places, it has led to a situation which is both cruel and inhumane, with unnecessary suffering on all sides.”

Mrs Jones, who now sits on the board of the trust to try to raise awareness of mental-health issues, is alarmed that since her son’s death, she is not seeing any improvements in the way mental-health patients are treated.

“I’m constantly watching children like Matthew be failed by the system, just like he was,” she says. “I feel so frustrated because things haven’t changed. If anything, due to funding cuts, they’ve got worse.”

We’ve always had members and supporters from across the political spectrum. Our campaign isn’t a matter of right and left, it is a matter of right and wrong: a matter of morals rather than political partisanship. We criticise Norman Lamb, for instance, not because he is a Liberal Democrat but rather because Norman Lamb is a useless, duplicitous, hypocritical Secretary of State at the Department of Health directly responsible for mental health who pretends to be powerless or in opposition and nauseatingly claims to be a ‘mental health champion’ whilst mental health funding has been slashed.

Many local MPs have remained completely silent during the crisis at Norfolk & Suffolk NHS Foundation Trust (NSFT), most likely because of loyalty to the government but we cannot have a situation in which political partisanship comes before morality and malfunctioning NHS trusts are beyond criticism: that is the way to Mid Staffs. The media is speaking out from right and left, locally and nationally. It is time our MPs did the same.

The Norfolk & Suffolk members of Parliament who should be speaking out are: Norman Lamb (Care Minister responsible for mental health), Chloe Smith, Simon Wright, Henry Bellingham, Elizabeth Truss, George Freeman, Keith Simpson, Richard Bacon, Brandon Lewis, Peter Aldous, David Ruffley, Therese Coffey, Dan Poulter (Health Minister), Ben Gummer, Tim Yeo and Matthew Hancock. If you click on your MP’s name, you can send him or her an email of complaint. If you are unsure of who is your MP, you can find out by clicking here.

Click on the image below to read the full article by Anna van Praagh in the Sunday Telegraph: 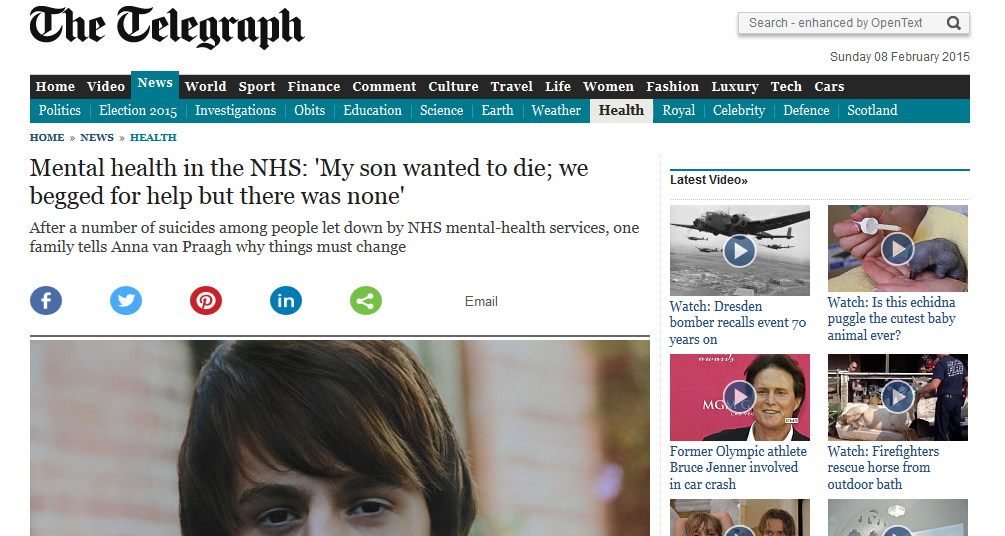 One thought on “Sunday Telegraph: Mental health in the NHS: ‘My son wanted to die; we begged for help but there was none’”