Robby West and Matt Precey of the BBC report:

The parents of a mentally ill ex-soldier warned a health trust he was collecting knives before he murdered an 83-year-old dog walker.

A letter from a Norfolk and Suffolk NHS Foundation Trust psychiatrist said Palmer was told to “get rid” of the weapons and would “hopefully” comply.

The trust said an internal review into the case was under way.

Palmer was described as “dangerous” when he was sentenced to life in prison for murdering Mr Wrighton, whose injuries were so severe police initially thought he had been killed by an animal.

Palmer’s parents said their warnings that their son was not taking his medication were ignored because health workers said they could only “believe the patient”.

His mother and stepfather – who do not want to be named – told BBC Look East he had been documented as saying it was “inevitable” he would kill.

Since the formation of the CCGs in 2013-14, Norfolk and Suffolk NHS Foundation Trust (NSFT) has seen its share of the Norfolk NHS budget fall by 8.3 per cent. At the same time, the number of referrals received by NSFT has increased by 48 per cent. Is it any surprise that mental health services have collapsed?

Now, the head of the STP and the Chief Officer of the lead Norfolk commissioner for mental health, Antek Lejk, who starved NSFT of the money it needed, has been imposed as the Chief Executive of NSFT when service users and carers deemed him unappointable.

“They thought we were busybodies, interfering in Alex’s mental health and care, because they were the experts,” she added.

What we often hear is that NSFT refuses to engage with carers but then fails to act in loco parentis itself. Murders like are thankfully extremely rare. But far more common and frequently unreported are mental health services users dying from neglect or suicide.

Correspondence sent by mental health professionals over a two-year period before the murder documented Palmer’s violent fantasies and the voices telling him to harm others.

After he was sectioned in 2015 in Peterborough, medical notes said he wanted to “get rid” of people in the street by “stringing them up and cutting them open”.

It is not surprising to us that it was another NHS trust that sectioned Palmer under the Mental Health Act: because of NSFT’s lack of beds, cuts to its crisis teams and the disintegration of the former joint working between NSFT professionals and Norfolk County Council’s Approved Mental Health Professionals (AMHPs), it is extremely difficult to arrange sections in Norfolk. Commissioners were warned by Waveney AMHPs of the severe problems four years ago.

His mother said Norfolk and Suffolk NHS Foundation Trust had “missed chances” to prevent the killing.

“I am not going to blame them solely, maybe we should have done more, but the amount of times we were treated like we were interfering, it didn’t matter how desperate I was,” she said.

Palmer’s stepfather added: “Peter Wrighton paid the price and his family continues to do so.” 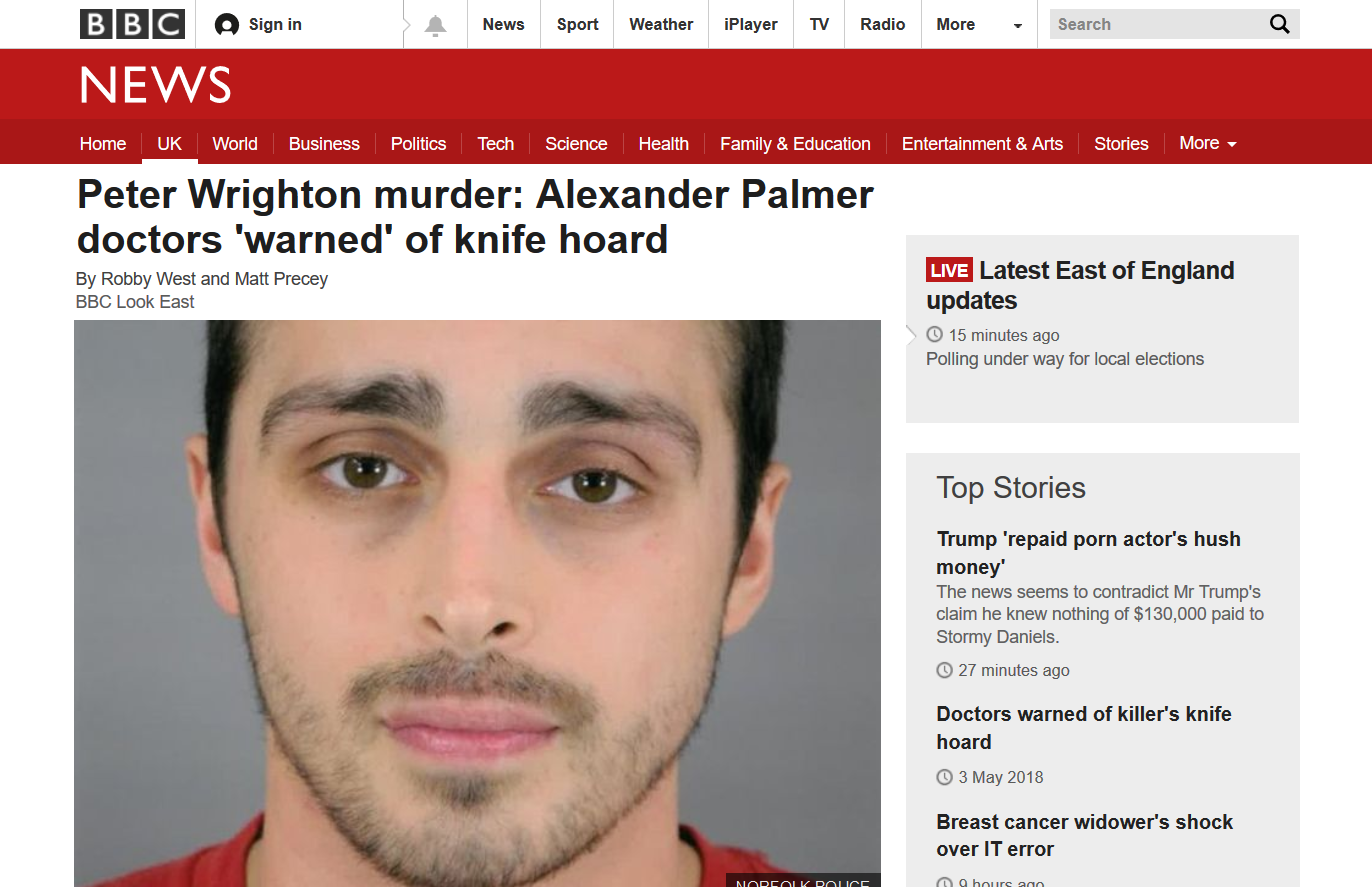