An internal investigation has been launched into mental health services in Suffolk and Norfolk after the number of patient deaths increased from 95 to 130 in a year.

It means the average number of deaths, including in accidents and suicides by people known to professionals to be living with a mental health disorder, has risen from four per month in 2013/14 to six per month in 2014/15. Death by natural causes and those related to drugs and alcohol are not included in the figure.

The figures were revealed in a report put to the Norfolk and Suffolk NHS Foundation Trust board of directors yesterday. It also showed the number of serious incidents, which include the number of deaths, had risen from 172 to 228 in the same period.

At the meeting yesterday, a spokesman for the Campaign to Save Mental Health Services in Norfolk and Suffolk said the rise in deaths followed a cut to the trust’s budget and a reorganisation of its services in 2013, which saw the number of beds and staff numbers reduced.

He called on the board to make all of the data used to compile the figures public.

“As a campaign, I don’t think we trust you,” he said. “Apparently the data is a matter of an FOI (Freedom of Information) request.

“[The data] appears to show a rise in the monthly suicide rate to approaching almost seven now. That appears to be a very rapid rise. You seem to be a board that’s in denial.”

Read the full story on the EADT website by clicking on the image below: 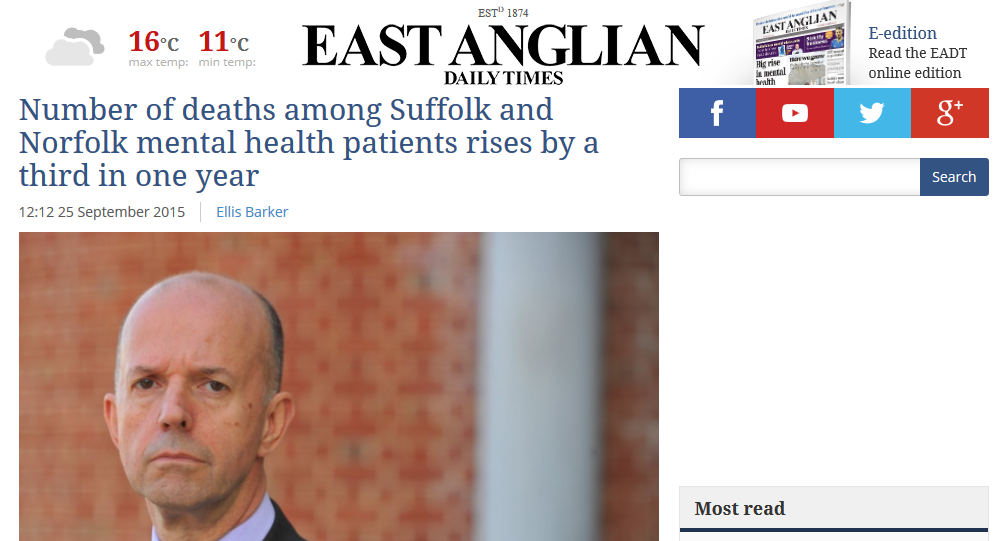