Campaigners have demanded answers and greater transparency from mental health bosses over a “shocking” rise in unexpected patient deaths in Suffolk and Norfolk.

Bereaved families, carers, patients and NHS staff were among the protesters who yesterday attended the annual general meeting (AGM) of the trust that runs mental health services in the two counties.

It was staged because the Norfolk and Suffolk NHS Foundation Trust (NSFT) did not include details of the number of unexpected deaths in its 2015/2016 report, which was being discussed at the AGM.

Terry Skyrme, founder of Campaign to Save Mental Health Services in Norfolk and Suffolk, said ahead of the meeting: “We are here because the trust is holding its AGM but is not discussing the fact that 300 people have died under their care in the last three years. They have removed it [the figure] because I think they are ashamed of it. They are not helping people who are at risk of suicide. They haven’t got the staff, the wards or the hostels.”

Suffolk campaigner Jane Basham added: “In order to be accountable the public needs to understand what’s happening in public services and the removal of crucial data is shocking.”

In fact, in the last three years there have been 401 unexpected deaths; a disgraceful number.

Adam Hunter, whose daughter died due to mental health issues, said: “The number of deaths are in line with national statistics so that being the case does that mean the trust thinks it’s acceptable that this number of people are dying?

“Shouldn’t it still be a matter of focus to reduce it whether it is in line with national statistics or not? People should not be dying and they are.”

NSFT claims the deaths are in line with national statistics but the Care Quality Commission (CQC) said the number of deaths at NSFT are ‘high’ when rating the mental health trust ‘Inadequate’ for safety in its October 2016 Inspection Report. To say the very least, we are extremely dubious about NSFT’s collection and reporting of statistics. As Twain attributed to Disraeli: ‘There are three kinds of lies: lies, damned lies, and statistics.”

After the AGM, a spokesman on behalf on the campaign group said: “We hoped that our protest at the deletion of the unexpected deaths report would stimulate some introspection from the board but they just carried on as before. ”

Read Gemma Mitchell’s article in full by clicking on the image below. Even better, support the local investigative and campaigning reporting which is so important to our campaign by buying a copy of the EDP or EADT today: the article is in both newspapers. 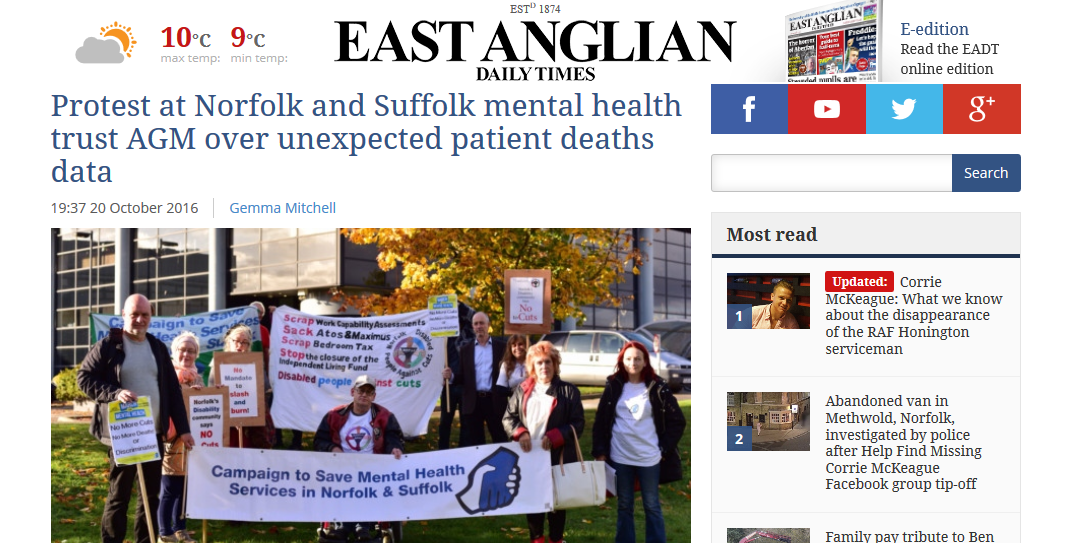