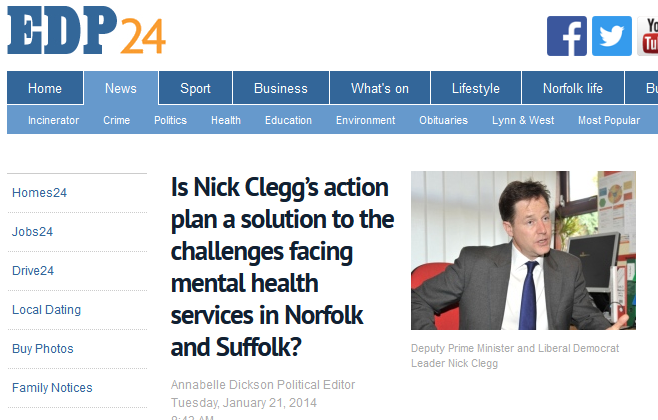 Terry Skyrme, who works for the mental health crisis solution team in Norfolk, is one of the leading campaigners against the cuts and said it was like they were going around and around in circles.

“Nobody is grasping the nettle. The Trust have managed the change really badly, but at the end of the day they are being forced to make cuts. It is a national problem and it’s a national crisis.”

He said: “I don’t think the CCG have got any money. How much discretion have they got if they have Accident and Emergency to fund and other areas of the health service looking for funds.

“Mental health has traditionally been underfunded, so it should have been exempt from cuts.”

He added: “If this was happening in physical health, if people were being sent to Harrogate for operations, there would be uproar. That is what is happening in mental health.”

Another campaigner, Mark Harrison from the charity Equal Lives, said that while he welcomed the “fine words” and Mr Clegg’s assertion that mental health services had to be treated equally with other parts of the NHS and funded equally, the deputy prime minister needed to “put his money where his mouth is”.

Nick Clegg talks about choice but what use is choice if the nearest bed is in Harrogate or Somerset?

What use is choice if your chosen health care professional is being made redundant?

What use is choice if you tell three people in Access & Assessment about your problems but you never receive any of the help you need because the community teams have been slashed?

What use is choice if you are too poorly to make a choice?