This recent report published by the NHS Confederation isn’t particularly useful (only 23 per cent of trusts even responded) but it does expose the mental health cuts of local MP and Secretary of State at the Department of Health responsible for mental health, Norman Lamb, as it pitches for more money for digital projects. In fact, it isn’t even written by the NHS Confederation, given that three of the four authors are private-sector management consultants: ‘Justin, Andy and Charlie are based at Transform. Transform is a customer experience strategy and delivery consultancy…‘ It would be interesting to know how much the report cost. But it is nice to see the NHS Confederation publish a document that accidentally confirms the duplicity of ‘mental health champion’ Norman Lamb. 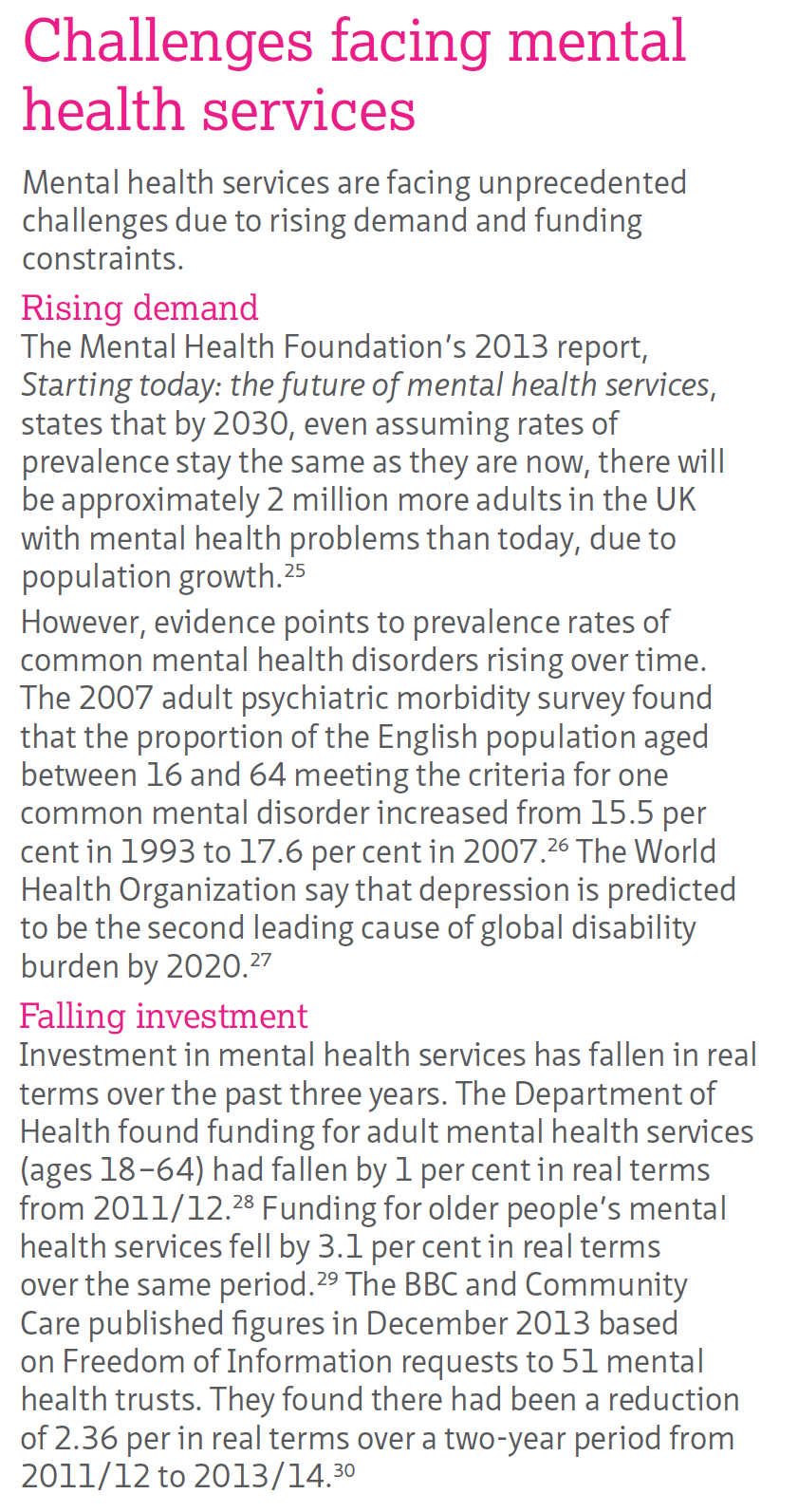 The Mental Health Foundation’s 2013 report, Starting today: the future of mental health services, states that by 2030, even assuming rates of prevalence stay the same as they are now, there will be approximately 2 million more adults in the UK with mental health problems than today, due to population growth.

However, evidence points to prevalence rates of common mental health disorders rising over time. The 2007 adult psychiatric morbidity survey found that the proportion of the English population aged between 16 and 64 meeting the criteria for one common mental disorder increased from 15.5 per cent in 1993 to 17.6 per cent in 2007.26 The World
Health Organization say that depression is predicted to be the second leading cause of global disability burden by 2020.

@NickFulcher6 That seems a reasonable position. Trust has to be earnt.

Nick, you are a winner in terms of decency, honesty, care, and courage. The others hold all the power and are none of those things. Too busy protecting reputations and careers over accountability and truth. You and Maxine hold your heads high. Your have done Peggy proud. twitter.com/nickfulcher6/s…

Our hearts go out to @NickFulcher6 and Peggy’s family. They have fought an honourable fight for justice but are out gunned and out manoeuvred by lawyered up organisations and a rotten system. Why can’t @NSFTtweets just do the decent thing? eveningnews24.co.uk/news/nsft…

Q. When are 2 or 3 older people 0? A. When @NSFTtweets are manipulating their OOA bed statistics. Q. When can you be selective with the truth and get away with it? A. When you represent NSFT in coroners court. Q. How can families get justice for loved ones? A. Never in Norfolk