Charlie Cooper writes in The Independent:

A crisis in mental health care has been declared by NHS staff in East Anglia, across a region covering the constituencies of two government health ministers.

Nurses say that it has become common for there to be no beds available for mental health patients in all of Norfolk and Suffolk, leading to severely ill patients being driven hundreds of miles to hospitals as far as Manchester.

The situation has become so acute that staff, who regularly work excessive hours because they cannot leave their patients until a bed is found, are considering industrial action. In one incident, a mental health professional spent 22 hours with a patient who was eventually driven to a ward in Cheshire.

Since 2012, the trust has made 175 staff redundant. Despite rising demand, there are proposals to reduce bed numbers in the Great Yarmouth and Waveney areas. Staff warn that care levels have been compromised. In February, staff wrote to local health commissioners warning of “a crisis in bed availability” and “patients’ safety being placed at risk and their legal rights infringed”. Last week, three wards in Norfolk had to accommodate patients on makeshift beds in the ward living room after reaching bed capacity.

Emma Corlett, a mental health nurse and Unison branch spokesperson, said patients assigned an urgent mental health assessment within four hours by GPs were being assessed over the phone because staff had no time or resources to meet them. “They are effectively being phoned saying: ‘Do you think you can keep yourself safe overnight?’ This is obviously unsatisfactory. It’s not clinical judgement that’s driving that decision,” she said. “It’s the sheer volume of work.”

Dr Rob Harwood, of the British Medical Association’s consultant committee and a senior anaesthetist in Norfolk, said the trust had forced through changes to mental health services “not seen elsewhere”. “It’s the ultimate irony,” he said. “We have two health ministers whose constituencies are covered by the trust which is doing some things that are difficult to understand.”

Click on the image below to read the full story: 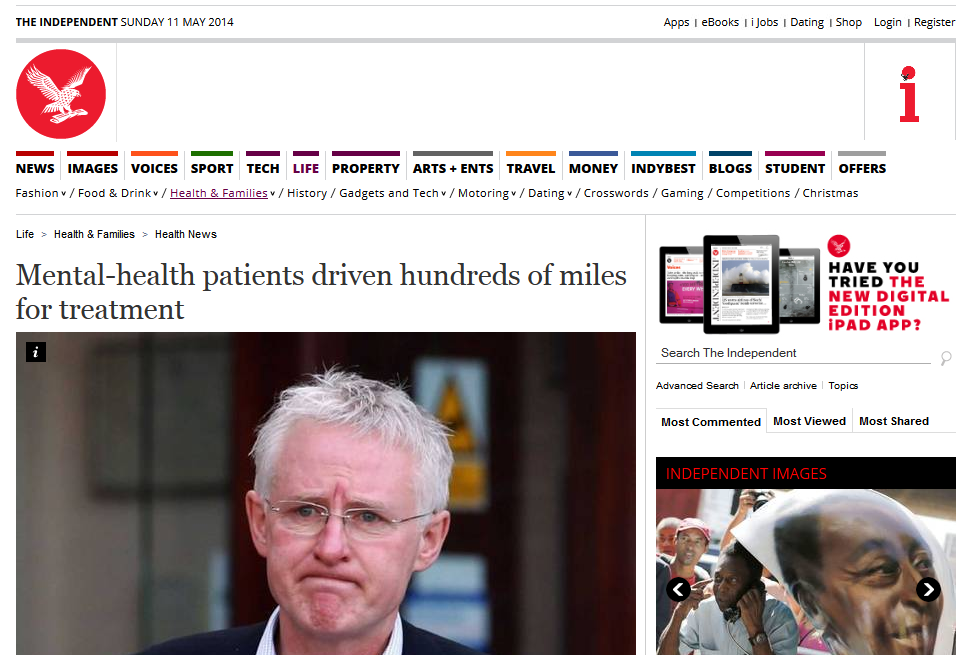 3 thoughts on “The Independent: Mental-health patients driven hundreds of miles for treatment”