Children’s mental health services in Norfolk could be taken over by Sir Richard Branson’s controversial company Virgin Care, it can be revealed.

The private company, which provides more than £1bn-worth of NHS contracts across the country, is believed to be eyeing a move into Norfolk – prompting fears about the creeping privatisation of the NHS.

One campaigner said it would be an “absolute disaster”, while another said: “The last thing we need is Richard Branson to join in.”

The possible move by Virgin Care emerged in board papers for a meeting of mental health trust directors on Thursday, which said the process of re-tendering the child and adolescent mental health services (CAMHS) contract had begun.

The papers say: “Virgin are bidding for CAMHS services in Devon, indicating they will bid in Norfolk, should the tender proceed.”

Research by the pressure group the NHS Support Federation found over the last seven years Virgin Care had been awarded contracts worth more than £2bn and by this year was running more than 400 NHS services across the country.

But the county’s CCGs said no decision had been made, and re-tendering was only a “potential option in the future”. A spokesman added: “It is unfortunate that speculation has been made, in the way it has, in trust board papers.”

Oh dear. Looks like the CCG bureaucrats don’t like the mental health trust letting the cat out of the bag about their privatisation agenda. God forbid that the public might hear the truth!

Remember that Patricia Hewitt, the Chair of the NHS cuts vehicle, the so-called STP, gave up her ‘commitment’ to the NHS as soon as her ministerial car disappeared, taking highly-paid jobs with Boots and the private equity owners of the private hospital chain BUPA. From New Labour’s Health Secretary to the public face of vicious NHS austerity cuts via ‘consultancies’ for private medicine is quite a political journey. Channel 4’s Dispatches termed the peddling of political influence for cash ‘Doing a Hewitt’. What is it about Labour MPs for Leicester?

Campaigners said awarding the contract to Virgin Care would be “devastating”.

Jan McLachlan, from the NHS Norfolk Action Group, said: “It’s interesting how these services have been run down, this is the first thing that happens before privatisation. I think it would be an absolute disaster.”

A spokesman from the Campaign to Save Mental Health Services in Norfolk and Suffolk said: “We don’t need the private sector. We need decently-funded, well-managed and integrated NHS mental health services. The last thing we need is Richard Branson to join in.”

Self-proclaimed ‘mental health champion’, Norman Lamb, couldn’t bring himself to condemn the move. That’s not surprising, as he has previously said that he isn’t bothered whether the NHS is delivered by the public or private sector. He was, after all, the person Jeremy Hunt called his ‘coalition buddy’. As the Coalition Minister of State at the Department of Health directly responsible for mental health, Norman Lamb failed to stop the catastrophic mental health cuts at Norfolk and Suffolk NHS Foundation Trust (NSFT):

“I’m concerned about the proposal but we also have to recognise we have to do a lot of work to improve children and adolescent mental health in Norfolk.”

According to the NHS Benchmarking Agency, while Norman Lamb was in government, Child and Adolescent mental health services (CAMHS) in Norfolk and Suffolk suffered the worst cuts in the country – three times the national average.

Perhaps what is needed is the reversal of those savage cuts rather than Richard Branson?

This newspaper has previously reported funding was given by commissioners to cover 30pc of children who needed help in Norfolk and it would take an extra £36m to reach all children.

And the region’s mental health trust last year topped the list for the number of referrals to treat children and young people it turns away.

What is needed is sufficient money and decent leadership that cares about the quality of services delivered, not privatisation.

The spin doctors at Virgin get involved, probably worried about the impact on Branson’s other brands of his greedy involvement in the privatisation of the NHS:

A spokesman for Virgin Care said it did not comment on procurement but pointed towards a blog written by founder Sir Richard which said: “Contrary to reports, the Virgin Care group has not made a profit to date.

“If and when I could take a dividend from Virgin Care (which would make us a profit over and above our overall investment), I will invest 100pc of that money back into helping NHS patients young and old, with our frontline employees deciding how best to spend it.”

Branson gives no undertaking not to sell Virgin Care and trouser billiions having destroyed the NHS in the process. Taxes are paid on profits, so Virgin Care is unlikely to ever make them.

The classic tax avoider’s tactics are:

What is Richard Branson doing? He gained his first competitive advantage in business from evading Purchase Tax on records.

Even the Daily Mail has reported:

Just 20, [Branson] launched his business career with a company that pretended to export records that were, in fact, being sold in Britain. Flogging records through mail order, he successfully undercut the prices of established retailers by avoiding the payment of purchase tax – worth £500,000 in today’s money.

After this was exposed by a Customs & Excise investigation, Branson sought legitimate ways to avoid paying taxes.

In 1973, the huge profits from his Virgin Music company’s first hit, Mike Oldfield’s Tubular Bells, were paid into a company registered by the budding businessman’s ‘trustees’ in the tax-free Channel Islands.  The album made Branson a millionaire. Ever since, he has paid advisers to construct his Virgin empire through a bewildering series of off-shore companies.

A man who has spent his life avoiding contributing to the NHS now thinks he can own it.

Who does Richard Branson think he is believing that he has the right to decide how the NHS’s ‘profits’ should be spent?

The EDP exposes Virgin’s suing of the NHS:

Virgin Care caused controversy last year when it sued the NHS after losing out on a £82m contract to provide children’s health services in Surrey.

Virgin said there were “serious flaws” in the way the contract was awarded and the NHS paid out an undisclosed sum in a confidential settlement in November 2017.

Surrey Downs CCG initially said its liability in the case was £328,000 in its October public finance papers, the HSJ reported.

But this was later removed and the CCG said the level of detail “should not have been included”.

At the time Labour branded the settlement as “scandalous”.

But when Virgin overbids on contracts, as happened on the East Coast mainline, Richard Branson expects to walk away from his commitments, costing the taxpayer millions.

Join us on Thursday 1st March on our protest against greed, mental health cuts and privatisation at Carrow Road outside the South Stand at the entrance for the Top of the City where those responsible for the disaster in mental health services and the planned privatisation are gathering for their ‘Breaking the Mould’ event. They’re actually ‘Breaking the NHS’. Assemble at 11.15 a.m. for a protest between 11.30 a.m. and noon.

You can read more about Virgin Care at the excellent Private Eye. 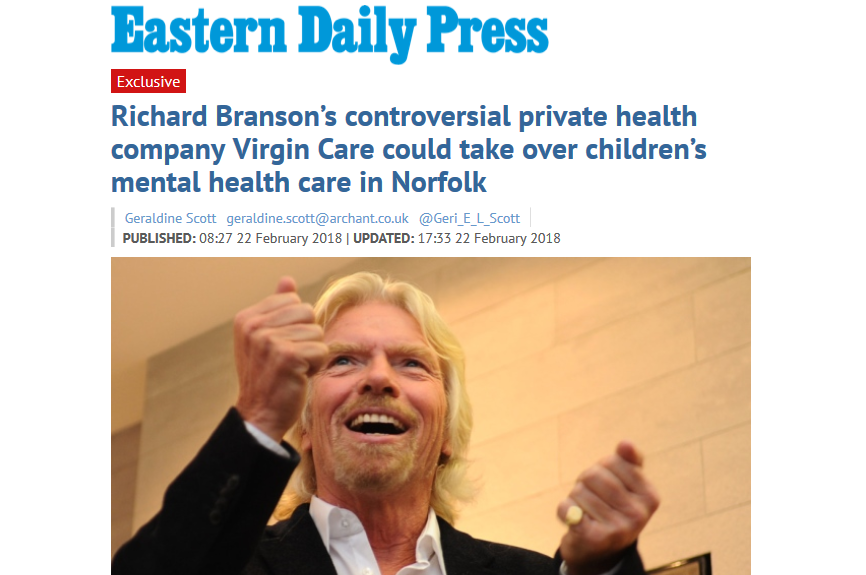 We are meeting our region’s MPs on Tuesday 5th July in London to lobby for a public inquiry into @NSFTtweets. If you want to come with us/see us off, or share your story/concerns with the media please DM for details. Please contact your MP and ask them to attend on your behalf.

.@labourlewis asking @sajidjavid to meet with our members (many are bereaved) on 5th July when we go to London to lobby our MPs. We need all Norfolk and Suffolk MPs to work together for their constituents and ensure @NSFTtweets delivers safe care. fb.watch/dXUlupYVOY/

How many have died at @NSFTtweets ? Here’s a desperately sad death of a 21 year old who was clearly crying out for help. No Prevention of Future Deaths report - again. RIP edp24.co.uk/news/inquest-n…