A man who suffered fatal injuries while under the care of the Norfolk and Suffolk NHS Foundation Trust had run out of medication to treat his schizophrenia, an inquest has heard.

Neil Jewell, 42, of Philadelphia Lane, Norwich, died at Ipswich Hospital on January 17, 2014, after being transferred to the Woodlands psychiatric unit in Ipswich just days before.

The inquest heard ‘childlike’ Mr Jewell arrived at Norwich’s Hellesdon Hospital clinic in a ‘pale and distressed’ state on January 6, 2014, saying he had ran out of Clozapine, a drug used to treat schizophrenia which had kept him ‘stable’ for three years.

Why wasn’t Mr Jewell given the right amount of medication when he needed it?

We raised the Clozapine crisis at the time of Mr Jewell’s death. Elective admissions for clozapine retitration were almost impossible in 2014 due to lack of beds.

Justice delayed is justice denied. Why has this inquest taken more than three years to be heard? The lessons of Mr Jewell’s death should have been learnt for the benefit of all years ago. That said, at least the Suffolk Coroner is helpful to the media, which is certainly not what we hear in Norfolk.

In a family statement read out by Suffolk coroner Dr Peter Dean, Mr Jewell’s sister Christine Welfare claimed her brother had been sent away with an insufficient supply of medication on a previous visit to the clinic.

Mr Jewell’s mental health rapidly deteriorated in the following days so he was put in the care of Hamilton House in Norwich.

He had became paranoid, psychotic and started hearing voices in his head.

Why was Mr Jewell sent to a private nursing home rather than admitted to an NHS hospital ward? Because too many of the beds needed to support people in crisis with a prompt local hospital admission had been closed. NSFT has continued to close beds.

The community, crisis and specialist teams that had kept people like Mr Jewell well have been cut to pieces, with millions wasted on paying highly experienced and qualified staff to leave.

Mr Jewell was sectioned under the mental health act and restrained with the help of police before being transferred to Wedgwood House at West Suffolk Hospital via ambulance on January 11, 2014.

Why wasn’t there a bed in Norwich? Why was Mr Jewell sent to Bury St Edmunds?

The inquest heard he was laid face down on a stretcher in the ambulance with his arms and legs restrained.

The same day, Mr Jewell was transferred to the Woodlands Unit at Ipswich Hospital where he was placed in a seclusion room under constant observation.

So, from Norwich to Bury St Edmunds to Ipswich.

On January 12, 2014, he was found unresponsive in the seclusion room after suffering a cardiac arrest.

He was taken to Ipswich Hospital’s A&E department and given CPR and defibrillation but never regained consciousness.

His family agreed to have life support switched off on January 17 as doctors could not wake him up.

As the Chief Executive of Norfolk and Suffolk NHS Foundation Trust (NSFT), Michael Scott, likes to say, not all unexpected deaths are suicides.

When we raised the mental health crisis back in January 2014, when Mr Jewell died, the arrogant and complacent Chair of NSFT, Gary Page, said it was a ‘so-called’ crisis.

NSFT’s Chief Executive and commissioners promised in January 2014, the same month that Mr Jewell died, that there would be no more out of area admissions after April 2014. Not only did they fail to keep their promise: the beds crisis became worse and worse. This year, NSFT will spend £4m on out of trust beds.

When we raised the rising number of deaths of NSFT patients at an NSFT Board meeting in 2014, a non-executive director of NSFT asked for our questions to be removed from the minutes.

Since the crisis began, the number of people dying unexpected deaths has doubled.

There is now a funeral of an NSFT patient every other day.

When we hold the NSFT Board to account and raise the cuts, job losses, complacency, broken promises, incompetence, wasted millions, denials, pay rises and deaths, NSFT directors accuse us of ‘personal attacks’ and spend thousands of pounds of NHS funds on lawyers.

NSFT has responded to the increasing number of deaths by removing all record of them from its own Annual Report. 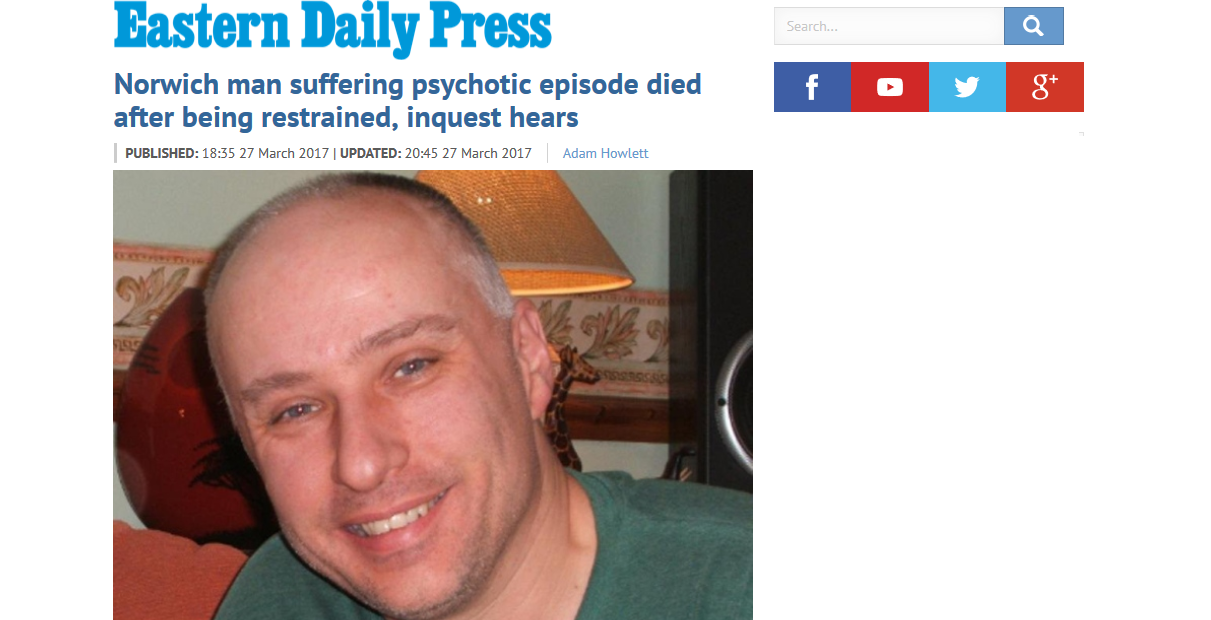