We’ve written before about the financial scandal of the £7.3 million redundancy programme at Norfolk & Suffolk NHS Foundation Trust (NSFT), which paid experienced and highly qualified staff to leave, wasted millions of pounds of taxpayers’ money, placed services at risk, damaged continuity and quality of care and created a recruitment crisis.

NSFT claimed at the HealthEast sham consultations that the NSFT staff who were paid to leave lacked skills or were in the wrong part of the Trust for vacancies. Just one example of the folly of the redundancy programme is the departure of an extremely competent consultant psychiatrist from the central Norfolk locality community teams in April 2014. Given his age and experience, this doctor would have been entitled to a package of up to £200,000 to leave. But, incredibly, his former job still needed to be done. As soon as the consultant left, NSFT employed a locum doctor to fill the vacancy in the team created by his departure. Now, NSFT is advertising for a permanent replacement.

How can NSFT waste up to £200,000 of NHS money in a non-redundancy situation? How can Jane Marshall-Robb, NSFT’s Director of Workforce and Organisational Development, remain on the NSFT Board? NSFT currently has about five hundred vacancies and is overspent by £500,000 on locum doctors in the first four months of the financial year alone. Whatever happened to personal responsibility and public accountability? How did NSFT’s non-executive directors and governors, Monitor, the seven CCGs, NHS England, local scrutiny committees and MPs fail to properly supervise NSFT and the radical redesign? We and others were warning about the redundancy programme long before it happened but nothing was done. The vulnerable and the voiceless cannot be made to pay the price of the bureaucrats’ mistakes in cuts to vital frontline services.

Click on the image below to see the advertisement on NHS Jobs: 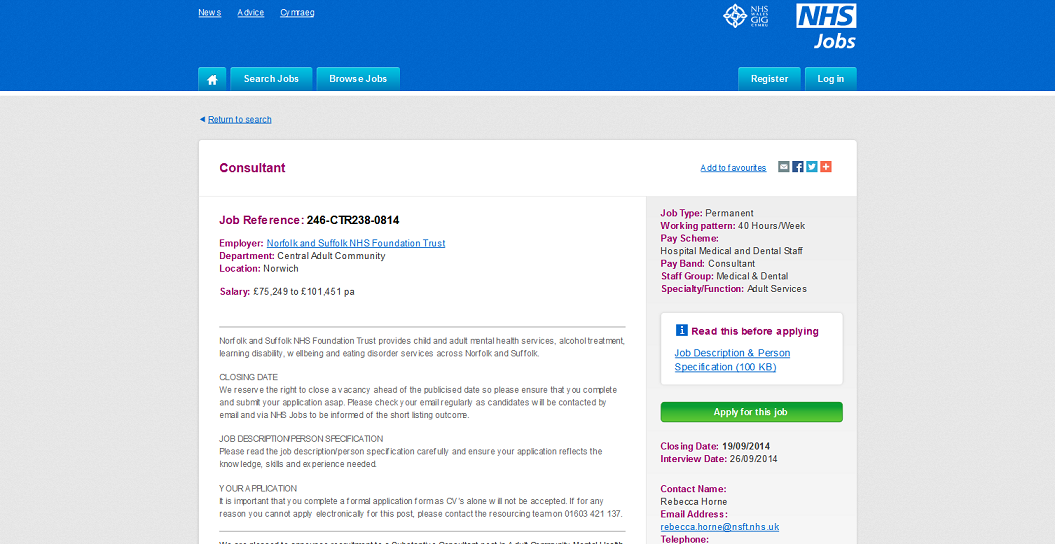