Norfolk and Waveney’s so-called STP is holding consultations across Norfolk with a view to creating a ten year strategy for mental health.

The STP bureaucrats are talking about a Stalinist ten-year plan when mental health services are in crisis NOW.

Of course, the bureaucrats will be long gone before the ten years are up, with their ‘enhanced’ gold-plated index-linked pensions intact. And the business of service delivery rather than PowerPoint presentations is difficult.

The STP represents the five clinical commissioning groups (CCGs) in Norfolk and Waveney which have funded mental health services so poorly that they have collapsed.

The ‘Sustainability and Transformation Partnership’ (STP) is the primary vehicle for NHS cuts and privatisation.

Since the CCGs were formed by the disastrous Health and Social Care Act, referrals to Norfolk and Suffolk NHS Foundation Trust (NSFT) have risen by 48% as NSFT’s share of the Norfolk NHS budget has fallen by 8.3 per cent.

NSFT has been rated Inadequate by the regulator of care, Care Quality Commission (CQC), twice and NSFT directors are saying without shame it has failed its latest inspection: sorry NSFT Board, it is three strikes and you’re out!

NSFT was the first and remains the only NHS mental health trust to be placed into Special Measures by NHS Improvement. This has happened not just once but twice.

But NSFT’s failure it not just a failure of the trust’s management, but also of commissioning and what the NHS bureaucrats call the ‘system’.

After mental health services were rated Inadequate by CQC, the CCGs formerly led by Antek Lejk have failed to fund the CQC’s recommendations.

While mental health services have been in crisis and cut, NHS bureaucrats have paid themselves and management consultants more and more money.

As mental health services were destroyed, the Orwellian ‘system’ bureaucrats promised service users and carers that the cuts were ‘transformations’, ‘radical redesigns’, ‘cost improvement programmes’ and ‘improvements’ when they were the polar opposite.

As the cuts caused the breakdown of multidisciplinary working, the ending of social workers embedded in mental health teams, the removal of addiction services from the NHS and disastrous cuts to the voluntary sector’s mental health support with the Norfolk Integrated Housing and Community Support Service (NIHCSS), bureaucrats talked about ‘integration’.

Unexpected deaths more than doubled at NSFT and are still at least fifty per cent higher than when NSFT was formed. Hundreds of people have died as a consequence.

And six months ago, the ‘hatchet man’ himself, Antek Lejk, the former head of the STP with a worrying background at NHS Cornwall who failed to fund mental health properly as Norfolk commissioner, trousered a staggering £35,000 pay rise from NHS coffers to become the Chief Executive of NSFT in the full knowledge that services users and carers were and are utterly opposed to his appointment.

And we wonder why mental health services are in crisis: the values of the NHS are being corrupted. In fact, destroyed.

It is vital that genuine service users, carers, front line health professionals and workers, from both the voluntary sector and the NHS attend.

Please, please, make the effort. We must make our voices heard.

The STP, chaired by the disgraced Patricia Hewitt, has employed US management consultancy firm Boston Consulting Group (BCG) at a staggering cost to carry out this consultation and other work on its behalf. Of course, the ‘independent’ Hewitt is a former management consultant herself.

As far as we can tell, the consultation is being carried out by people without a background or qualifications in mental health. In fact, the consultation appears to be led by a former doctor, trained at enormous cost by the taxpayer, who decided he would rather produce shallow Powerpoint presentations for megabucks than treat NHS patients. What values?

BCG are talking about importing ‘models of care’ from the other side of the world (e.g. Tasmania and Washington, USA) when the model of care is not the problem. Tasmania is so far away that it is where the ‘radical redesign’ Medical Director of NSFT went to hide. The real problems are values, funding, management and supervision.

There are very good NHS trusts rated Outstanding by the regulator, CQC, in the UK using broadly the same ‘model of care’ as Norfolk.

We have already seen services destroyed by the ‘innovative’ ‘model of care’ of the ‘radical redesign’.

We have already seen the ‘innovations’ of: the closure of beds while they were needed; the closure of assertive outreach teams without a plan; the closure of the homeless team; the removal of link workers and their replacement with the so-called Access & Assessment Team; the ‘enhanced’ crisis team.

We have already experienced the financial and human costs of new ‘models of care’ and the destruction of the continuity of care and caring human relationships.

Norfolk’s CCGs ignored the findings of CQC inspections and our warnings, failed to invest properly in mental health, failed to stop the stupidity of the radical redesign, spent NHS resources on their own pay rather than services.

Although the Norfolk STP and BCG are secretive, we have so far identified the Norfolk ‘system’ as planning to spend £500,000 of taxpayer’s money with BCG: more than enough to fund a specialist team for a year or the defunct mental health homeless team for at least seven years. One consultation event was attended by as few as seven people, with nearly half of those being members of our campaign.

In Suffolk, they have produced a better consultation internally without spending astronomical amounts of money on management consultants. If work like this needs to be performed by management consultants, why are there so many NHS bureaucrats in Norfolk paid so much money? Never in the course of the NHS has so much been paid to so many for so little.

Suffolk’s far superior NHS ‘system’ has already made its feeling about the NSFT fiasco crystal clear.

Click on the image below to secure your free ticket on Eventbrite for the consultation event and make your voice heard.

Making your voice heard to save lives is so important and all it will cost is your time. 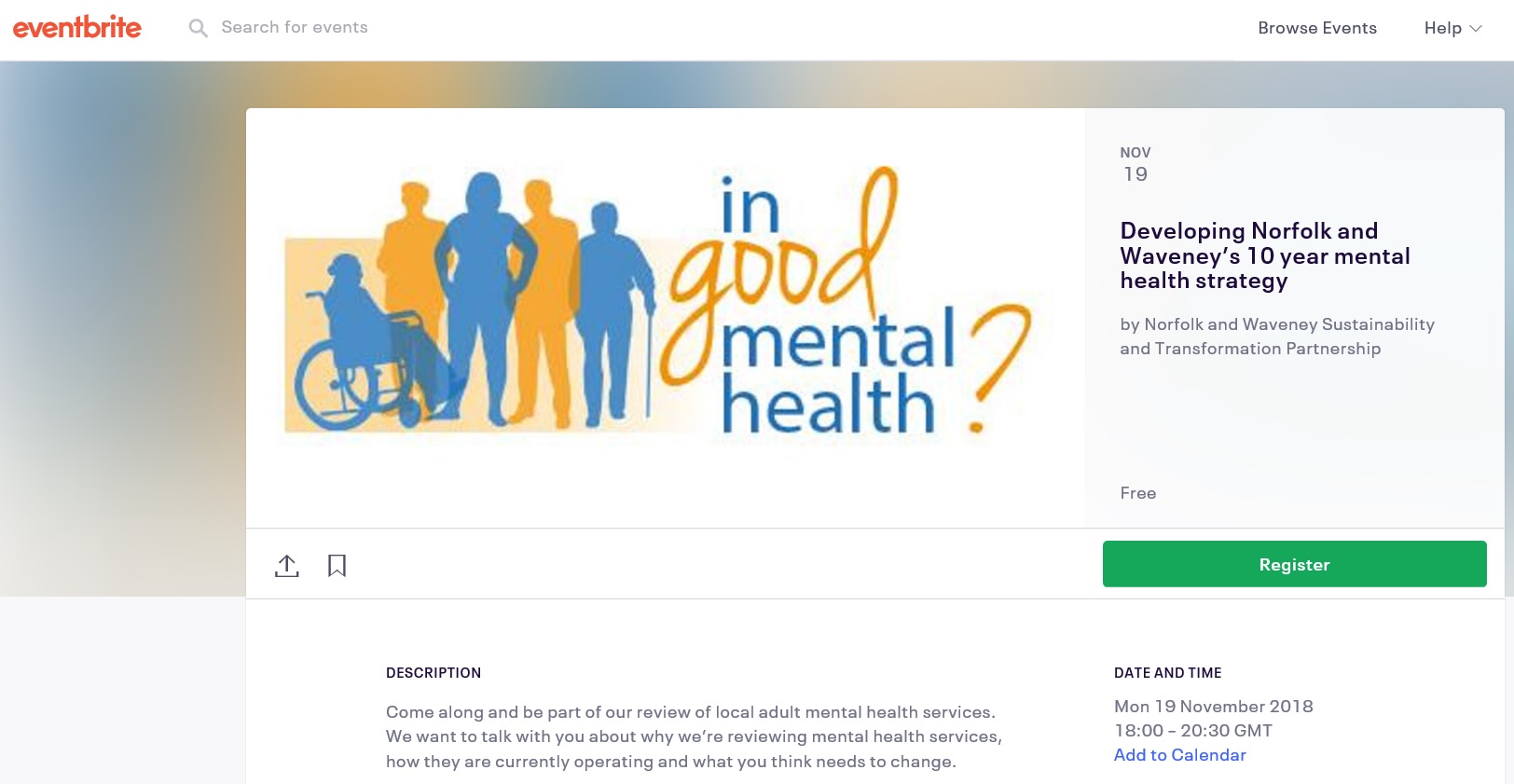